Forbidden loves, chivalry, archaeological sites, honour and revenge, major victories and irreparable defeats are all woven into the fabric of Çanakkale’s history. Situated in north-western Turkey, on the Asian side of the Dardanelles, with historical sagas dating back to times long past fused together with magnificent natural landscapes, gravel beaches, charming restaurants, and friendly locals, the city has got everything you could possibly need for a wonderful holiday in Turkey

History, archaeology and mythology have made Çanakkale an important place on Earth. Çanakkale is known for its pottery—the city’s name means pot fortress—but that is not only the name of the city situated on the Dardanelles, a narrow strait that separates not only the European and Asian continents, but also the name of a region in the Sea of Marmara.

Due to its geographical location, the city’s further development was often hindered in the past. On their way to Constantinople, any enemy forces would first attack Çanakkale. Çanakkale’s sad war history would make this city a major historic battlefield site.

The Battle of Gallipoli, which took place in 1915, made the city famous throughout the world. In World War I, the Entente powers, France, Britain, and Russia, sought to take control over the Gallipoli peninsula and use it as the base to occupy the Ottoman capital at Constantinople (Istanbul). The attempt failed, but resulted in terrible casualties—about half a million soldiers were killed on each side.

Home to battlefields, military graveyards and memorials that were erected after the battle, the Gallipoli Peninsula Historical Museum resembles an open air war museum. It covers a vast area includng the Salt Lake and the Ariburnu Cliffs. 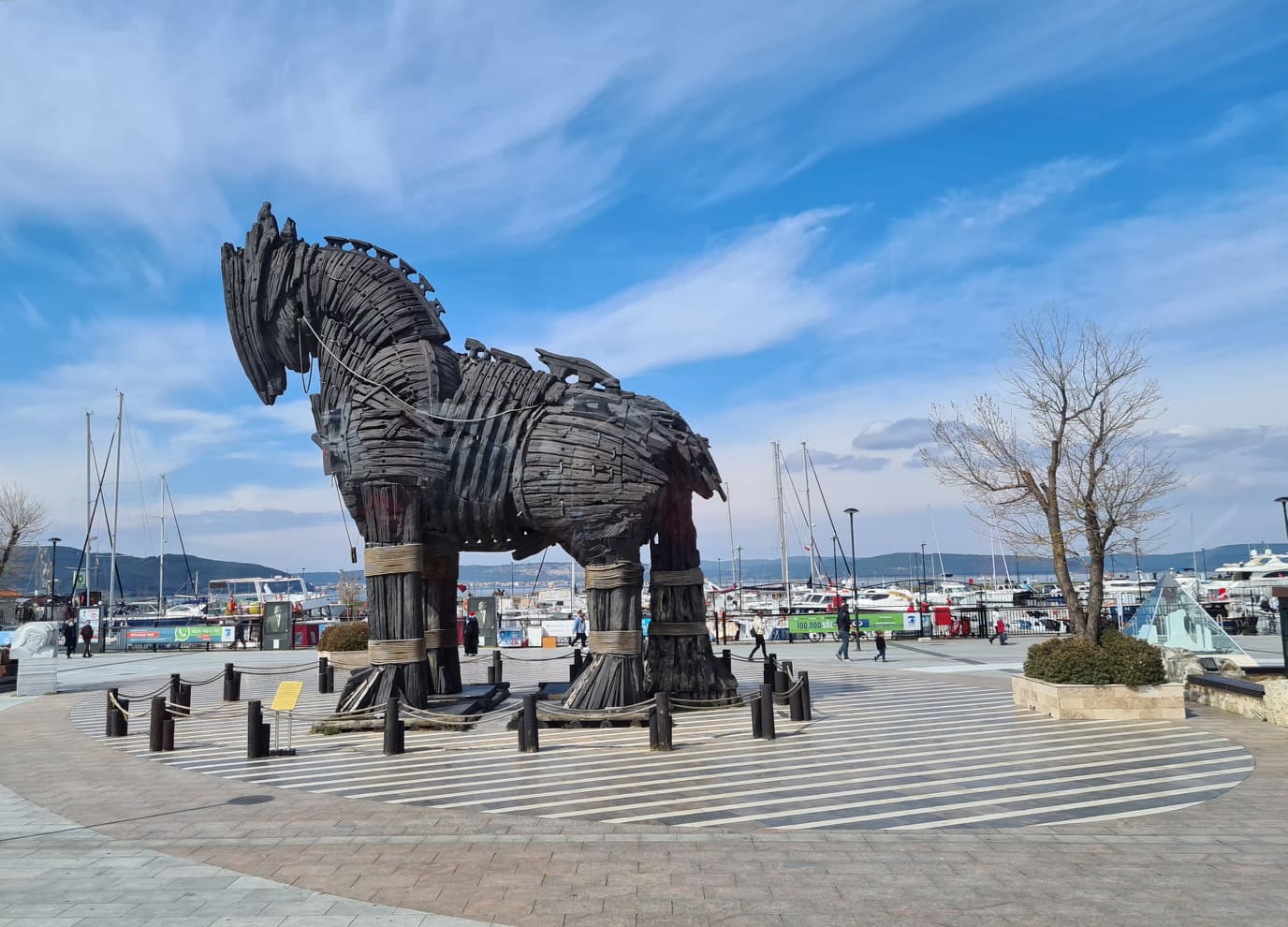 The ancient cities of Assos and Troy and the Archaeological Museum of Troy are must-sees in Çanakkale. A replica of the Trojan horse, which was the actual horse used in the famous film “Troy”, sits on the waterfront. After the filming was completed, the replica was donated to this site. The Trojan horse is now the most popular tourist attraction in Çanakkale. Nearby, there is a scale model of Troy with palaces and temples which provides an insight into the wealth and power of Troy. 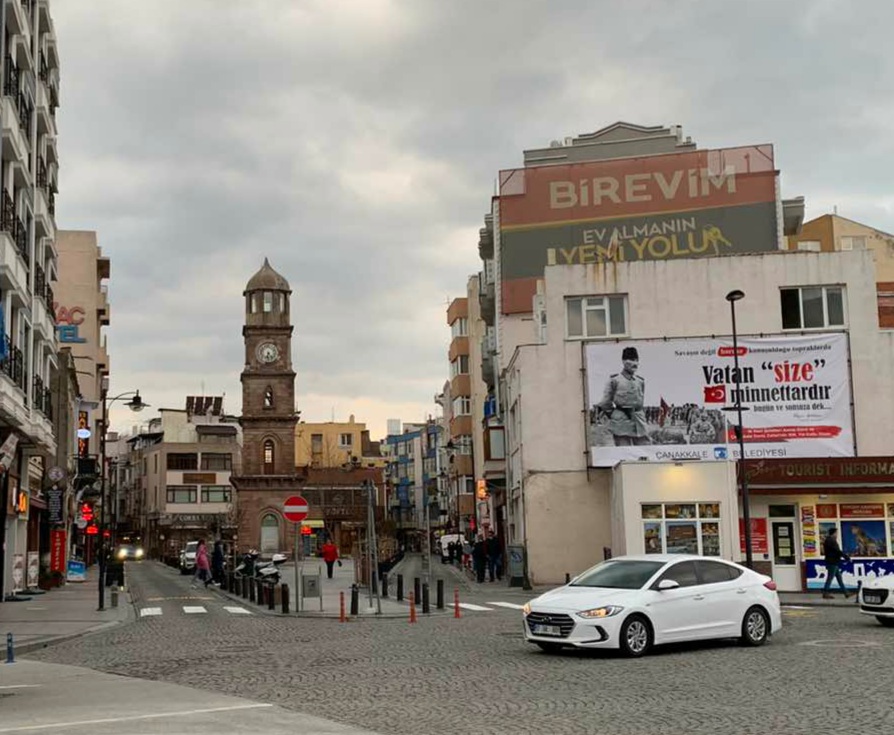 No self-respecting tourist should leave Çanakkale without snapping a picture of the Clock Tower, another city landmark. The 20-metre high and five-story tower, with a clock on each of the four sides and a bell on the top, narrows slightly as it rises. It is a popular meeting point, but also a starting point for long walks through the streets of Çanakkale.

Thanks to its fertile plains, orchards and pine trees, Çanakkale is also dubbed as the green lungs of the region. 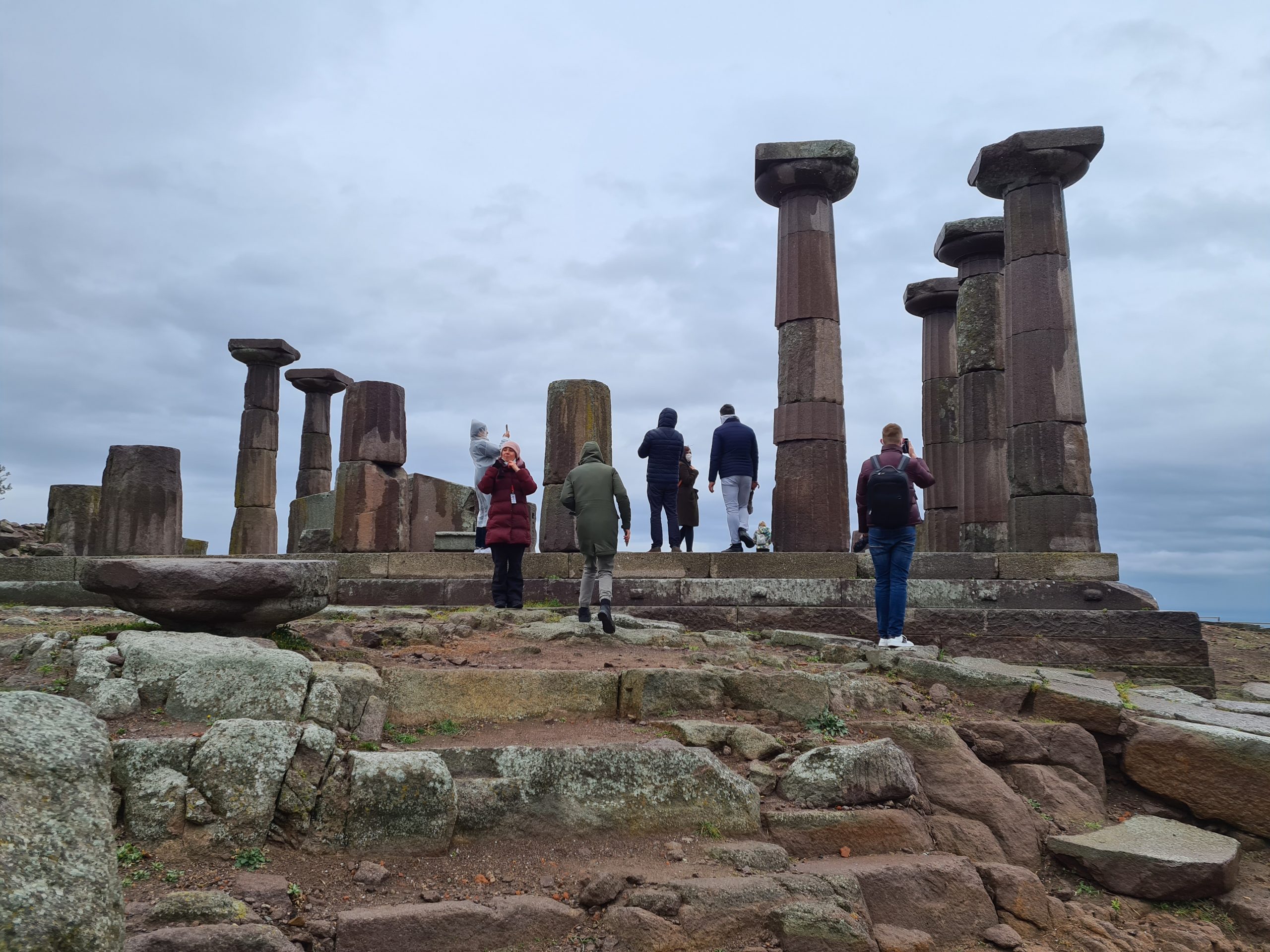 The road to the archaeological site of Asssos, which lies on a steep hill rising 235 metres above sea level, passes through Behramkale, a small village located along the western coastline of the Aegean Sea, in Çanakkale province, Turkey, and commands panoramic vistas of the sea, houses built of volcanic rock, and a myriad of small restaurants and inns. 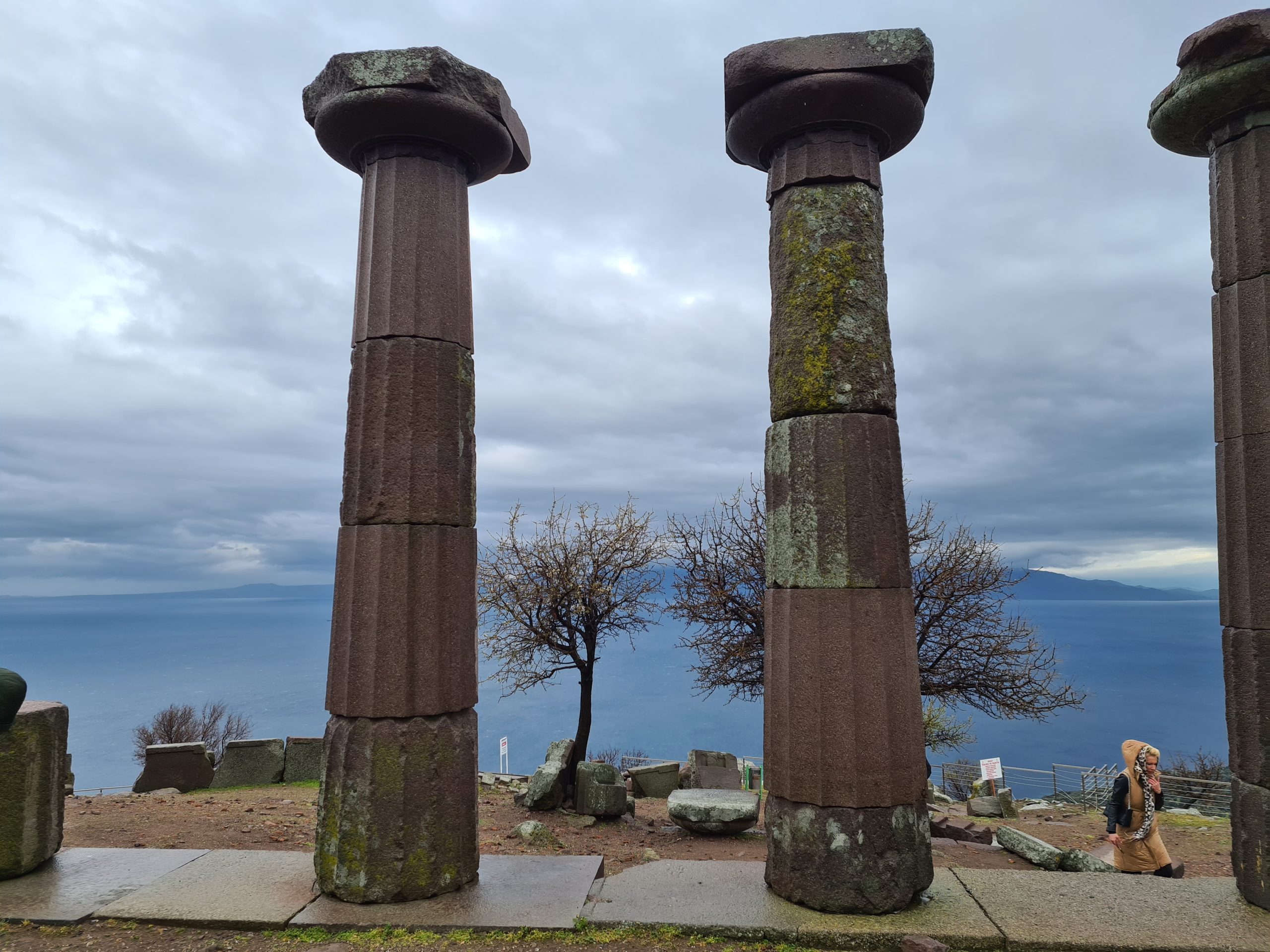 The first settlers settled in the area as early as in the Bronze Age, and the city was founded at the beginning of the first millennium BC.

Assos is most famous for the Temple of Athena. Below the temple, sitting on the hillside, ruins of the Assos amphitheatre that was built for 5,000 spectators are situated. Close by, six of the original 38 columns remain from the time when the city was founded, as well as the city walls and gates, the agora (the main square), and the gymnasium. To the northwest of the site, two massive Hellenic columns still mark the gate to the city. A lot of the precious remains of Assos, such as its art, can be viewed at the Louvre in Paris. 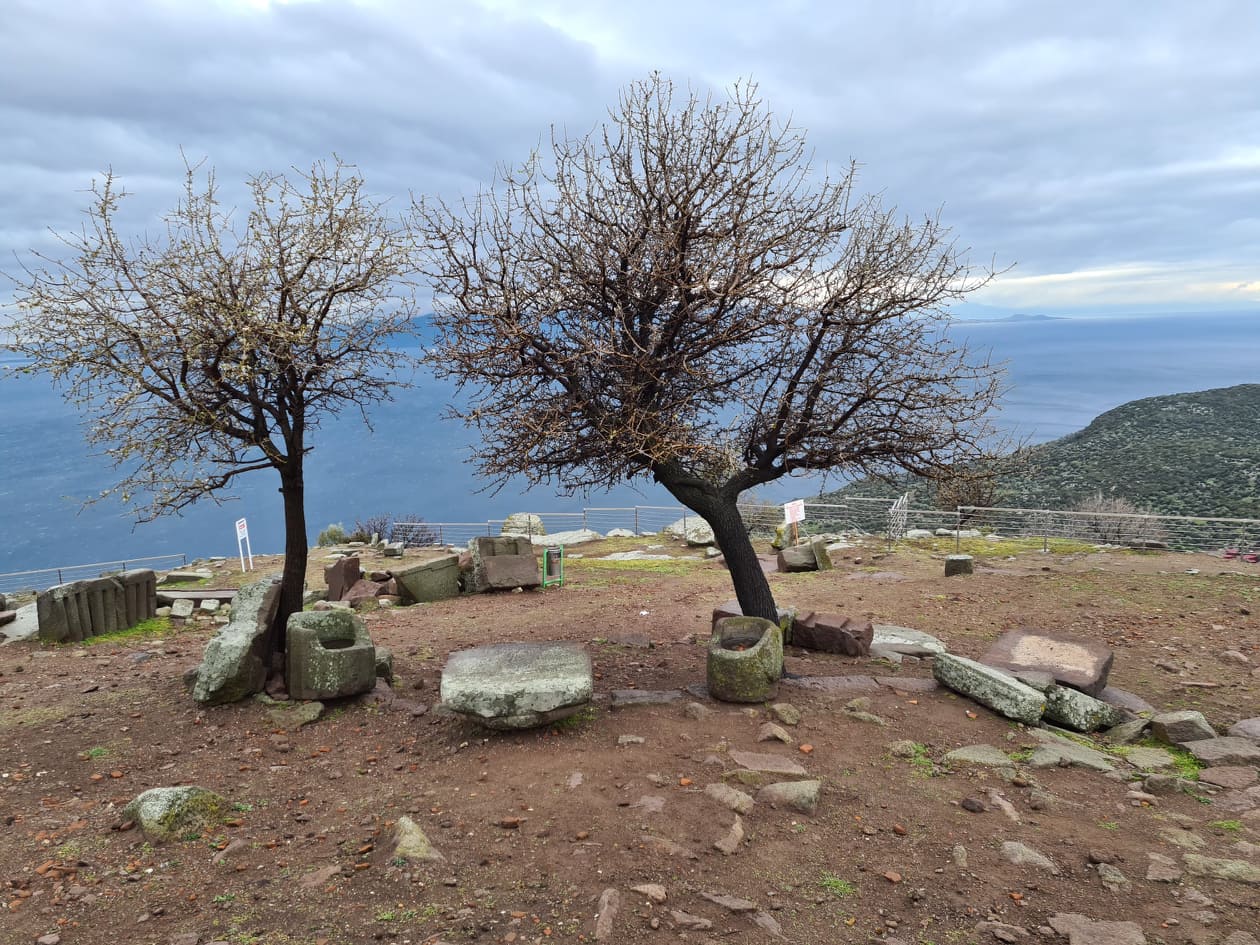 One of the most famous residents of ancient Assos was Aristotle. He left the Platonic Academy in Athens, and moved to Assos where he became head of a group of philosophers. From 334 and 241 BC, Assos was under the reign of Alexander the Great. The Greeks were able to defend the Assos Temple until the Ottomans conquered Assos again at the beginning of the 14th century. 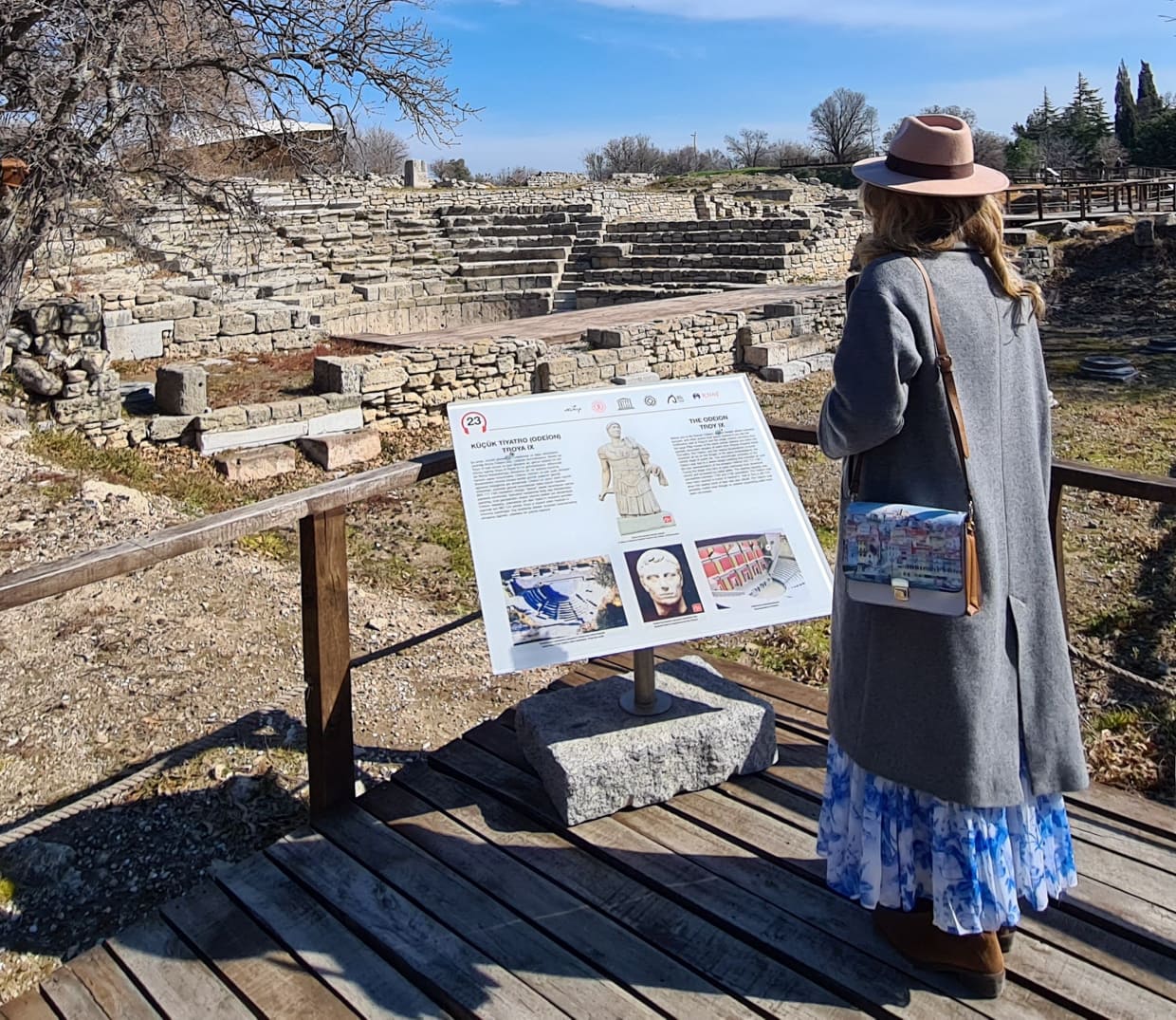 We read about Troy in history and literature books, saw it in films, admired the heroes of that time, and supported or condemned the love that was the main reason for the ten-year Trojan War 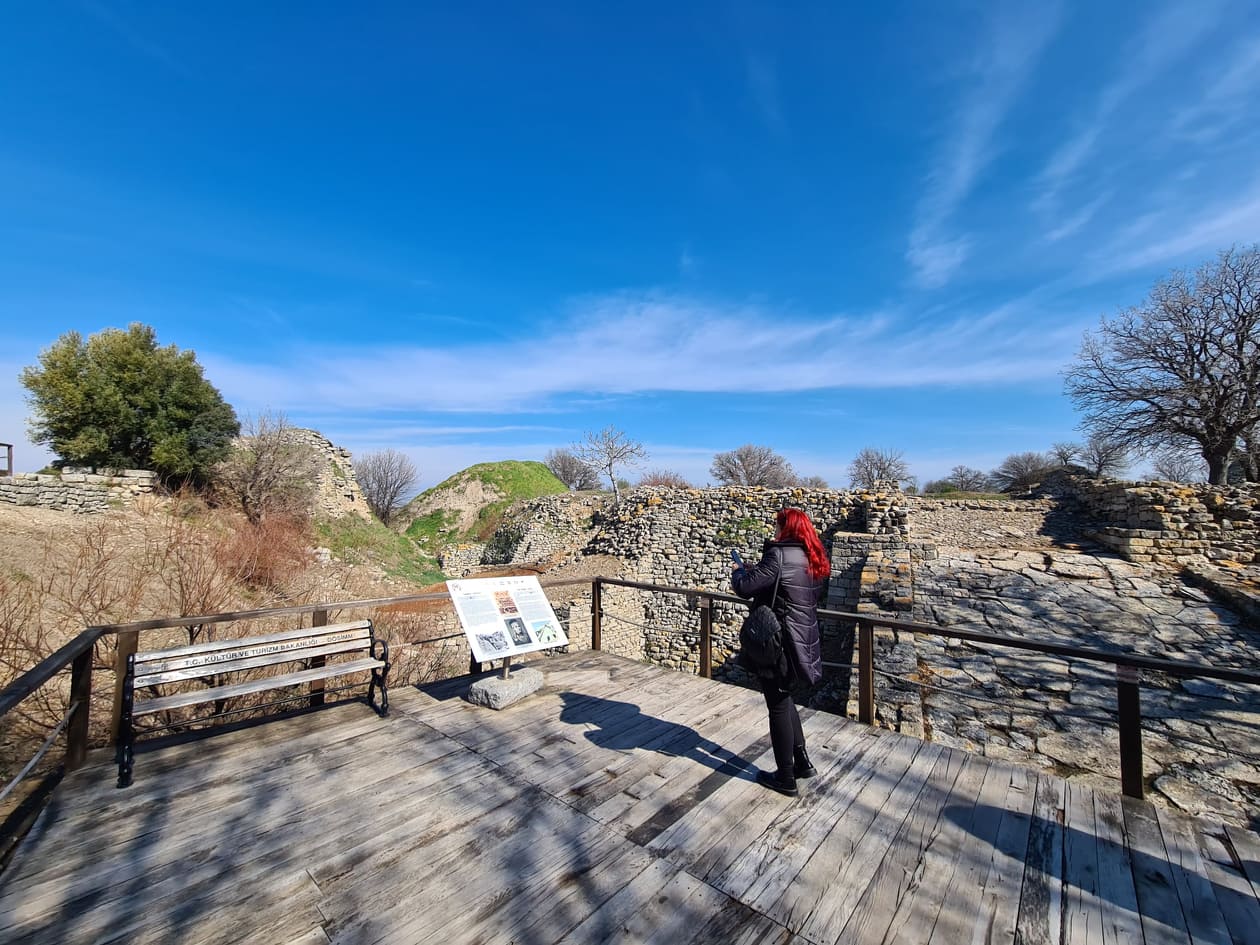 With its history dating back to 4,000 years ago, Troy is one of the world’s most famous ancient cities. It was discovered in the nineteenth century by German archaeologist Heinrich Schliemann, and is inscribed on the UNESCO World Heritage List.

To understand the history of and life in Troy, it might be a good idea to visit the Troy Museum first. It depicts the city throughout various historical periods.

Different layers of Troy in the niches on the walls feature massive sculptures, stage animations and large-size photographs, three-dimensional animations and holograms featuring main characters in Homer’s Illiad reciting the verses from the poem.

The story of the Trojan War was passed on through Homer’s epics, The Illiad and The Odyssey. We read about Troy in history and literature books, saw it in films, admired the heroes of that time, and supported or condemned the love that was the main reason for the ten-year Trojan War. Legends and myths spoke to all of our hearts. 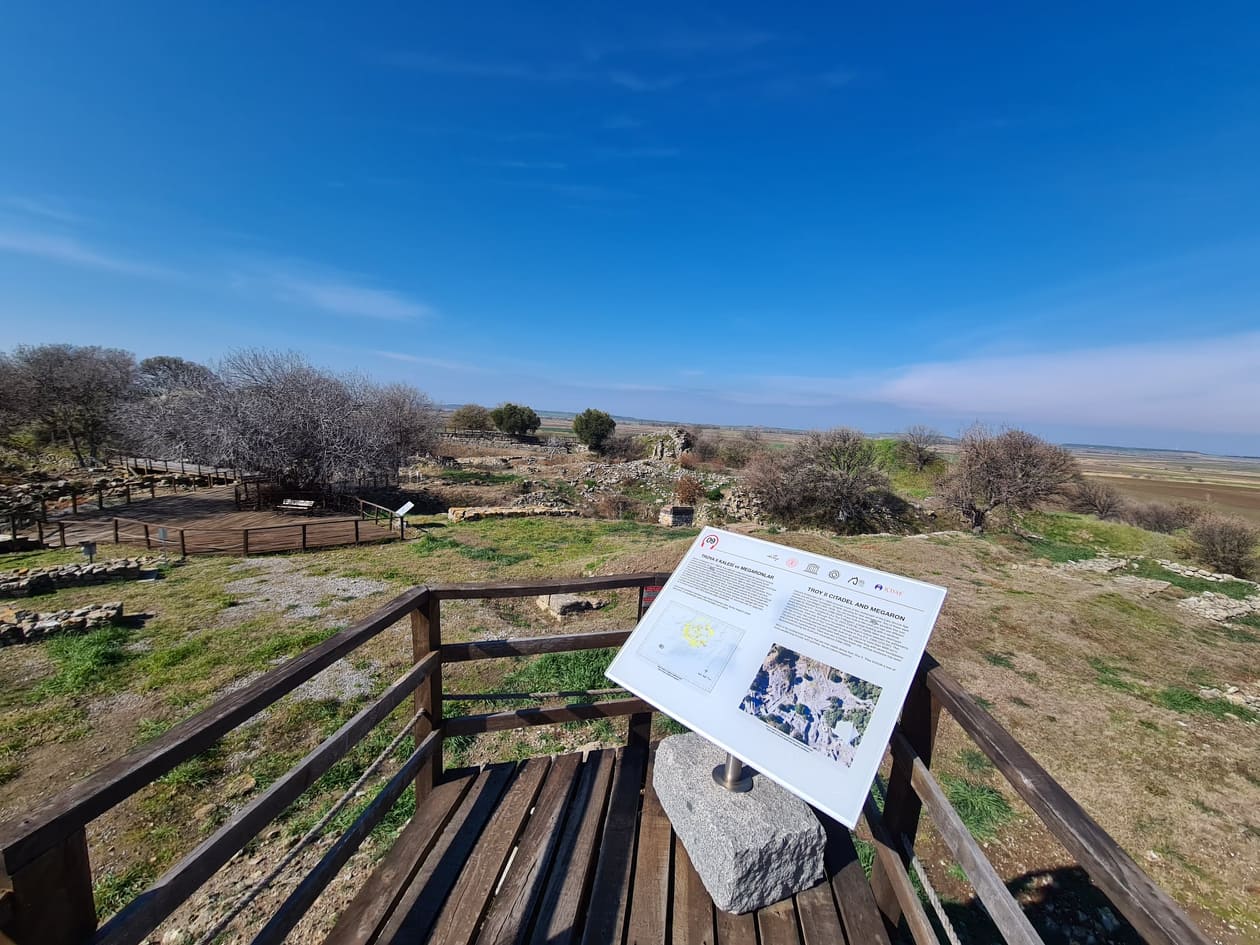 According to mythology, Troy was the site of the first beauty contest. Three goddesses claimed the title: Hera, Aphrodite, and Athena. Paris, a mortal Trojan prince, was the judge of the contest. Hera promised power, Athena promised wealth, and Aphrodite promised Paris the hand in marriage of the most beautiful of all mortal women. 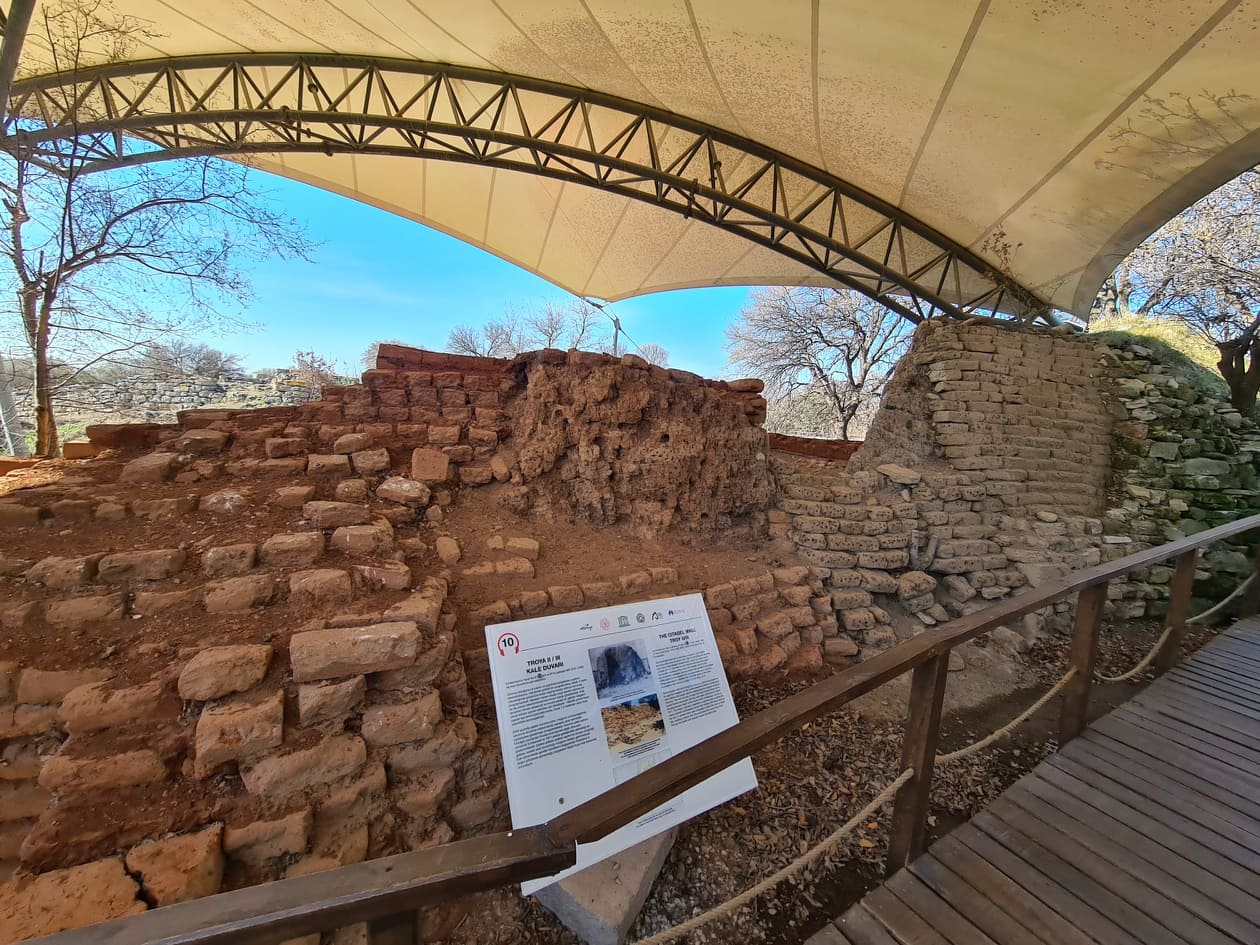 After Paris decided that Aphrodite was the fairest goddess, Aphrodite promised him that she would ensure that Helen, the most beautiful mortal woman, the daughter of Zeus and Leda, who was already married to the Spartan king Menelaus, would become his wife. That is why the war was inevitable. Paris sailed home to Troy with his new bride, an act which was considered abduction regardless of Helen’s complicity. The Greeks assembled a great army, led by Menelaus and his brother, Agamemnon, to retrieve Helen and conquer Troy. 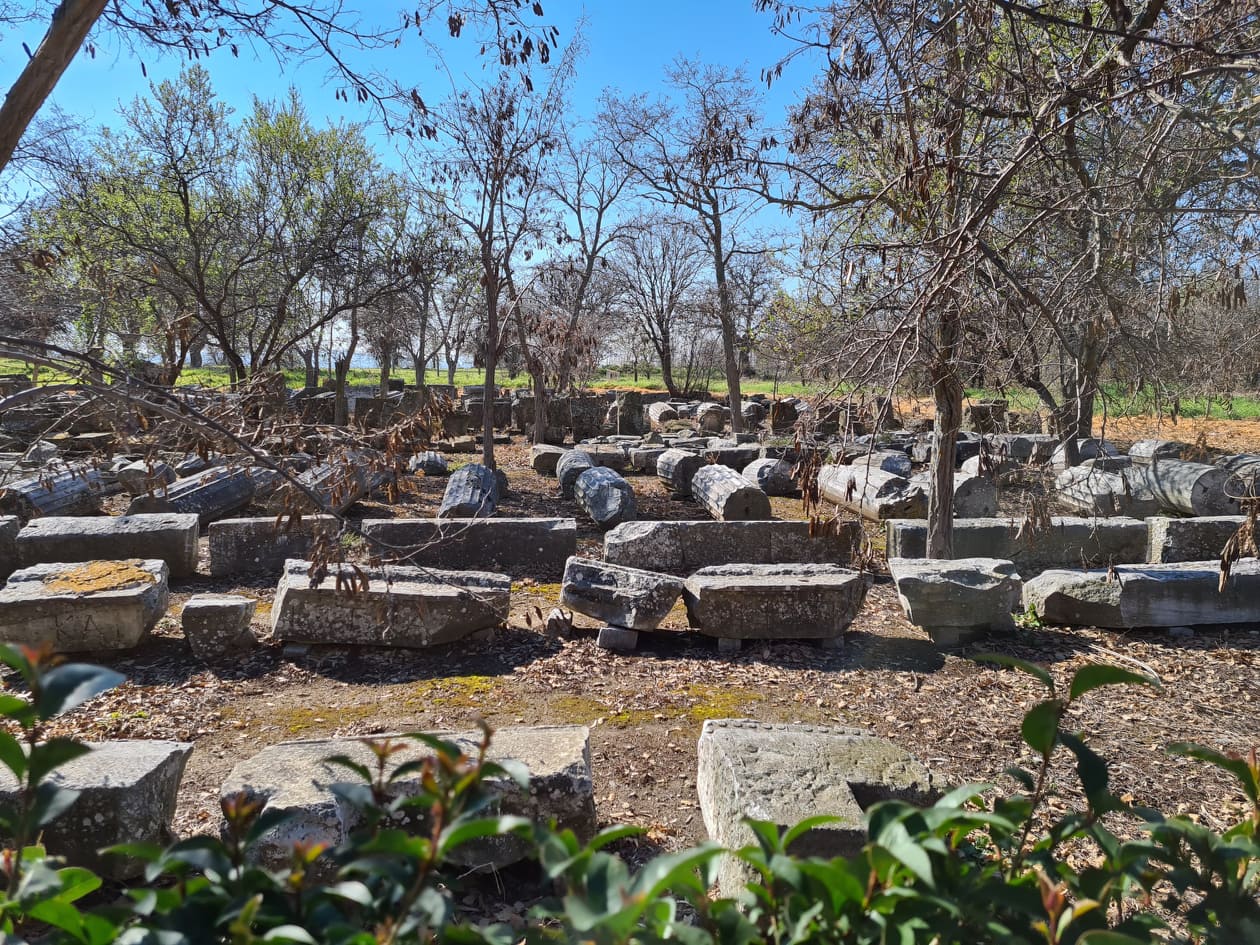 For almost ten years the city remained impregnable. The Greeks finally won the war by an ingenious piece of deception devised by Odysseus. They built a large hollow wooden horse with warriors hidden inside and left it as a gift for the Trojans. The Greeks pretended to board their ships and sail away. The Trojans pulled the horse into their city as a victory trophy. When night fell, the best Greek warriors emerged from the horse and burned and destroyed Troy to the ground. That is when the term the Trojan horse was coined.

At the city entrance stands a huge symbolic horse, built to scale. Nowadays, only ruins remain of this ancient settlement. When visitors know the stories and secrets of Troy, their experience of the archaeological remains discovered at this site are rather different, as they are no longer just walls and amphitheatres—they carry a much deeper emotional meaning for them.

The Temple of Apollo Smintheus is situated in a small village of Gülpınar, on the road between Assos and Troy Temple. This is where Apollo was worshipped as the god of mice, because he established justice by punishing the powerful kings for their injustice to their people, by plague epidemics spreading with mice.

The temple was erected in today’s Bahceli region, which is rich in water. Apollo sanctuaries are usually located near water sources or directly at the source. The reason for this is that the priests who foretold the future prophesied by looking at the water.

The Temple of Apollo Smintheus was built in the second century BC. It is surrounded by a total of 44 columns, eight on short sides and 14 on long sides. The temple is mentioned in Homer’s epic poem The Iliad, and the mythological scenes of the poem were described in detail in the column reliefs (friezes) on the upper part of the temple. 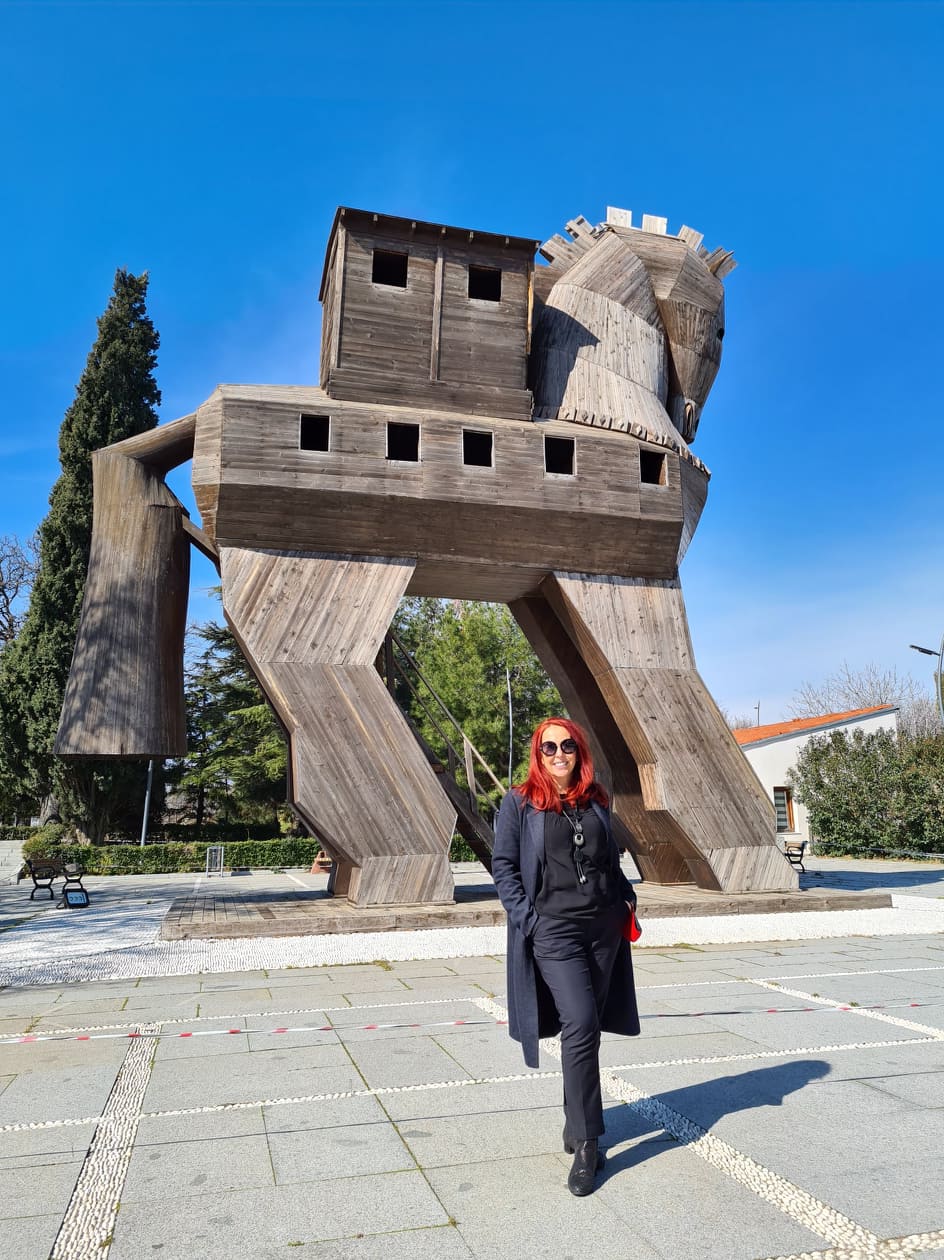 At the invitation of the Ministry of Culture and Tourism of the Republic of Turkey and the Turkish Tourism Promotion and Development Agency (TGA), Furaj.ba magazine representatives visited the famous historical site of Çanakkale in March 2021. 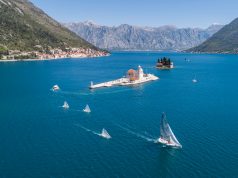