Spotlessly clean and full of greenery, with warm and welcoming people—this is how you will be greeted if you come to visit Cazin, a town in north-western B&H that appeals to visitors with gorgeous sites and the way the people of Cazin care for their town.

The Only Castle in B&H

Anyone who decides to head to Cazin will not want to miss out on visiting the impressive Ostrožac Castle, perhaps the prettiest castle and only castle in Bosnia and Herzegovina. There is a number of little old towns in the vicinity of Cazin, but none quite like Ostrožac. Built in a neo-Gothic style, the lovely castle is situated in one of the largest fortified towns on B&H. Since it is a protected national monument, Ostrožac is one of the main tourist attractions in Una-Sana Canton. The people of Cazin have kept it alive to the present day. They love to walk along the castle’s walls and organise various sorts of events in the castle’s large courtyard, a perfect venue for concerts, trade fairs, and festivals. In May each year, it is host to a recognisable event in the world of sculptures, which has entered its sixth decade of existence—the “Ostrožac“ Colony of Sculptors, and over the course of the year, it is home to a valuable collection of sculptures. For those who dream of a fairy-tale wedding in a medieval castle or just a photo shoot allowing the newlyweds to create a perfect wedding photo album, Ostrožac hosts wedding ceremonies each Saturday. If you decide to simply walk around Ostrožac, there is a public toilet, a stand selling bottled water, and a free wi-fi hotspot. Be sure to buy a few original items from a souvenir shop.

The Heart of Cazin

No less impressive are Cazin’s old quarters. You will first notice how stunningly clean the town is, and this is something Cazin is on par with other towns across Europe. It is no surprise that it received the “Champions of Environmental Protection 2021” award in the towns and municipalities category on the World Environment Day. The remains of the old fortress of town of Cazin dominate the city and its surroundings, and a mosque sits on the highest point in town. Evidence of prehistoric habitation on the site of the old fort was discovered during archaeological excavations. The fort was abandoned when an uprising against Omer Pasha Latas broke out in Cazin, and that is when the last canon was fired. A mosque was built within the ramparts of the mediaeval fortress, with the stone from the fortress, and was one of the largest mosques in Bosnia and Herzegovina.  Together with the mosque, the ramparts of the old fortress were designated a national monument of B&H. In addition to the medieval town, there are other cultural and historic treasures to see in Cazin. Nurija Pozderac’s House, one of the oldest autochthonous Bosnian houses in this region, which was also designated a national monument of Bosnia and Herzegovina, is situated in the very centre of Cazin. Nurija Pozderac was a national hero from World War II. Near the Pozderac House, there is a beautiful madrasa, which bears the name of the most well-known religious teacher in the region and the former Grand Mufti Džemaludin Čaušević.

The Strongest Town in Bosnia

Just like its name suggests, the old Bijela Stijena Fort (White Rock), situated in the settlement of Stijena, to the left of the Cazin-Bosanska Krupa road, about 10 km from Cazin, has stood the test of time and resisted multiple military attacks. The Bijela Stijena Fort dates back to the medieval and Ottoman Periods, and nowadays it is a protected national monument of B&H. From the time it was first mentioned in the charter of King Carlo Roberto issued on 9 December 1330, was known under different names—Stina, Villa Stina, Pusta stina, etc. In the Middle Ages, there used to be a Franciscan monastery in Stina, and in the first half of the 20th century, a mosque, a maktab, and a school opened in 1929 were found in the fortifications. The fort is bordered by a steep slope at the north, and by the bed of the River Horljava. The town seems to have been named after the river. One legend has it that it was named after a white rock, also known among the locals as ičicar, which is situated in the river bed. Another legend has it that it was named after a rock near the settlement of Krakovići, which is where the River Horljava goes underground. It is a subterranean river that flows into the Una River. The Una River is certainly one of the most important natural tourist resources the town of Cazin has to offer. It offers outdoor tourism aficionados a wonderful walking route stretching all the way from the Old Town of Ostrožac along the Una River Canyon to the settlement of Miostrah bearing a cool title—“Una Valley”. In addition to walking the trail, tourists can enjoy rafting down the river, fly fishing or relaxing on the hidden beaches along the emerald-coloured waters of the Una River.

Nature has blessed Cazin with a treasure of unmatched scenic beauty, and the people of Cazin have created a great number dedicated picnic grounds and swimming spots along the rivers around Cazin or elsewhere. The best swimming spots and resorts are situated in the valley of the Una River. One of the most popular swimming and picnic spots on the Korana River is located in the Tržac neighbourhood on the outskirts of Cazin. Just a few kilometres away from Cazin, a watermill, also known as “Mlin” among the locals, is nestled in the picturesque scenery of the Krajina region, which is why it is considered the prettiest outing spot around. Rivers and creeks in the vicinity of Cazin are dotted with watermills. Some of them have recently been reconstructed to reflect the old style charm from days gone by and new amenities have been added in order to attract more visitors to the area. You can see such mills in the following picnic grounds: Pivnice, Šturlićka Platnica or Gračanica. National monuments, towers and old towns, a lot of greenery, a large number springs with potable water—these are the things to see and revel in if you decide to visit Cazin this summer. 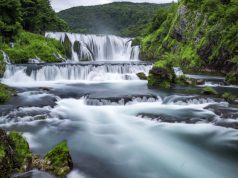