Not many schools across the world have operated without interruption for five centuries like Gazi Husrev Bey’s Madrassah has, and it has always paid special care to the selection of its teaching staff.

Founded way back in 1537 in the heart of Baščaršija, Gazi Husrev Bey’s Madrassah is famed for being a spring of knowledge and wisdom where thousands of male and female students come with a thirst for knowledge. It could not have been any other way at the place which is a part of famed Gazi Husrev Bey’s magnificent endowment.

March Down the Path of Your Life

Owing to his education, courage and charitable spirit, the governor of Bosnia during the Ottoman Empire and generous son of Bosnian aristocrat Ferhat Bey and Sultan Bayezid II’s daughter Seljuq managed to become known beyond the borders of the place he belonged to and made history in Sarajevo as a figure people are happy to remember. The school he ordered to be built as part of his endowment resembled the elite schools he himself attended because he wanted the best for the young generations: professors who would be selected on the basis of competence, pedagogical experience and human qualities; apart from quality teaching staff, students have also been taught using modern methods of teaching and provided with comfortable accommodation and healthy food.

Gazi Husrev Bey’s Madrassah was at first named after the waqf’s mother, but people later began to call it Kuršumlija because of the lead-coated copper covering its roof. In the spirit of Gazi Husrev Bey’s generosity, the Maddrassah also endeavored to always wholeheartedly welcome all the students who decided to spend their schooling years under its roof. In addition to passing down knowledge, its professors found it important to respect the children’s or the young people’s integrity at all times and instil in the students the strength of mind to boldly walk down their life’s path the way Khalil Gibran, Lebanese writer, wonderfully put it: “March on. Do not tarry. To go forward is to move toward perfection. March on, and fear not the thorns, or the sharp stones on life’s path.” 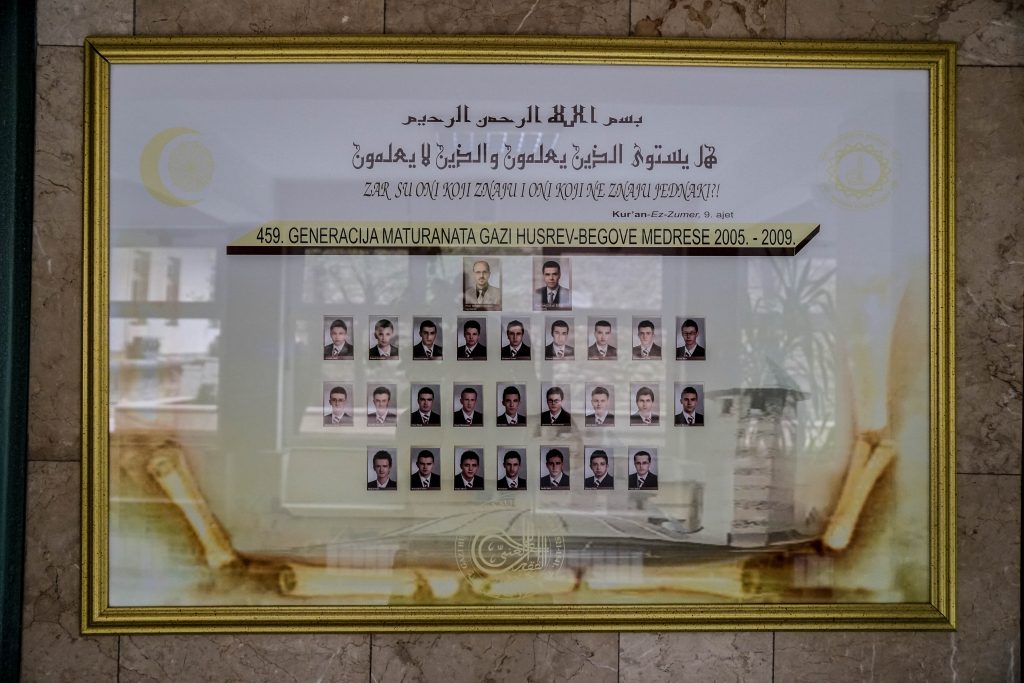 A full view of the harmonious edifice of Gazi Husrev Bey’s Madrassah, which is made of Bosnian stone and lead, is possible only when you peek out at it from behind the door of the inconspicuous gate right next to the alley across the Bey’s Mosque. According to the design of an architect of the Ottoman Empire, Persian architect Adžem Esir Ali, the central area of the large complex is the lecture hall called the dershana situated at the front of the closed courtyard, while the rooms off to the side are areas of predominantly residential character. As time went by, certain repairs to the building were done, but they never conflicted with the original architectural concept of the Madrassah which would establish itself as a highly regarded educational institution.

Even though it was not a religious school when it was founded, the new social, political and cultural situation in the country that arose with the establishment of the Austro-Hungarian rule resulted in Gazi Husrev Bey’s Madrassah being named a religious school. However, as the Austro-Hungarian period was also a time of Bosniaks’ productive engagement, the Madrassah maintained its reputation.

Even though the older names of the Madrassah do not get mentioned very often, it is worth knowing that the name Gazi Husrev Bey’s Madrassah began to be officially used as late as 1921 when the Kuršumli Madrassah and the Khanikah, the dervish academy of the Khalwati Order, were united. A few important dates related to the organization of its operation are often referred to in history books, including April 1939 when the Madrassah’s character was clearly defined. The Waqf and Mearif Board in Sarajevo passed a decree on Gazi Husrev Bey’s Madrassah designating it as a fully vocational secondary school providing general religious education in the spirit of Islam and preparing candidates for various religious roles and enabling them to pursue further education at different educational levels. This was made possible thanks to the Madrassah’s diverse program which does not involve only religious subjects, but social and natural sciences as well.

Today, Gazi Husrev Bey’s Madrassah is attended by students in eight male and eight female classes coming from places across Bosnia and Herzegovina and from foreign countries, since children whose parents emigrated from B&H a long time ago are happy to receive an education here. This attractive shore, which has been washed by the waters of education for a number of centuries, is a springboard for their big dreams and they will take steps on the path of the future to make them true.