Twenty six years ago, Iztok Grmek became a diplomat. On behalf of his country, he went on a diplomatic mission to Hungary, Bulgaria, Ukraine, Moldavia, Switzerland and Belgium, and nearly four years ago he became Slovenia’s ambassador to Bosnia and Herzegovina. 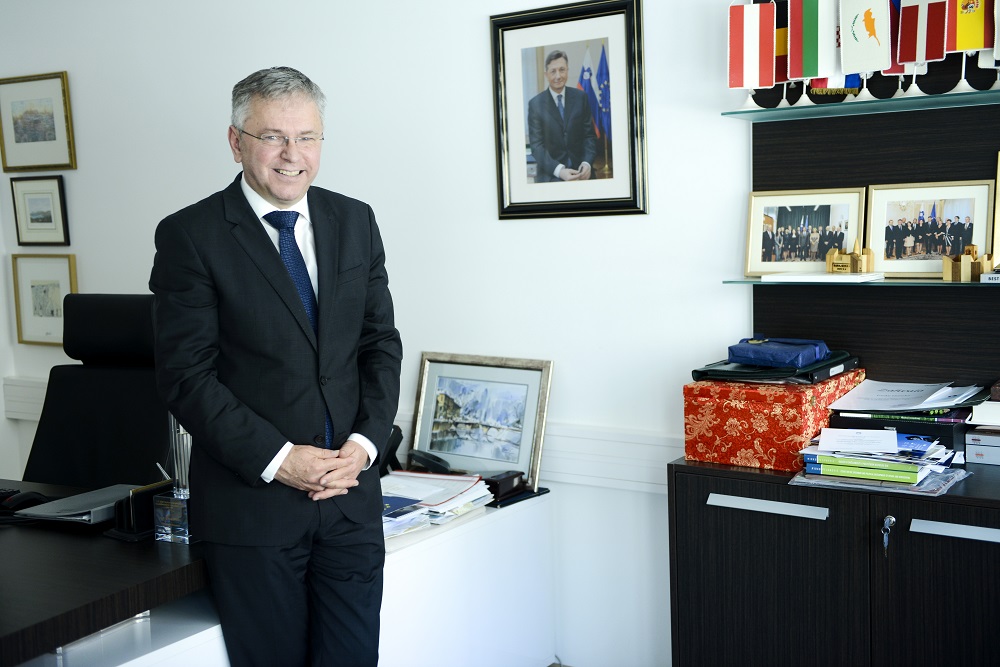 The Embassy of the Republic of Slovenia is situated in a modern building in the center of Sarajevo. Bicycles are parked in front of it and this shows that Slovenians are environment-friendly Europeans. As you sit on a wellness green sofa in a light and airy waiting room, you cannot help but get the impression that the environment is an extremely important factor in Slovenian society. This impression gets even stronger when Ambassador Iztok Grmek tells you that over 50% of Slovenians, which equates to more than a million people, go hiking! The Ambassador is a very cordial man, and he is communicative, helpful and considerate when he speaks.

What were your ambitions when you started to work in Bosnia and Herzegovina?

– Slovenia and Bosnia and Herzegovina are linked by history and tradition, and I endeavored to promote good bilateral cooperation at all levels including political, economic and cultural cooperation. I’d particularly like to emphasize the links between the people from BiH living in Slovenia, and the people from the Republic of Slovenia living in BiH. Apart from promoting bilateral cooperation, a diplomat also gets involved in resolving issues which put a strain on the relations between the two countries. That’s why I was delighted that both Karl Erjavc, Foreign Affairs Minister of the Republic of Slovenia, on the occasion of his visit to BiH last October, and Dr Miroslav Cerar, President of the Republic of Slovenia, who visited BiH in April this year, stated that there were no major open issues between our two countries. 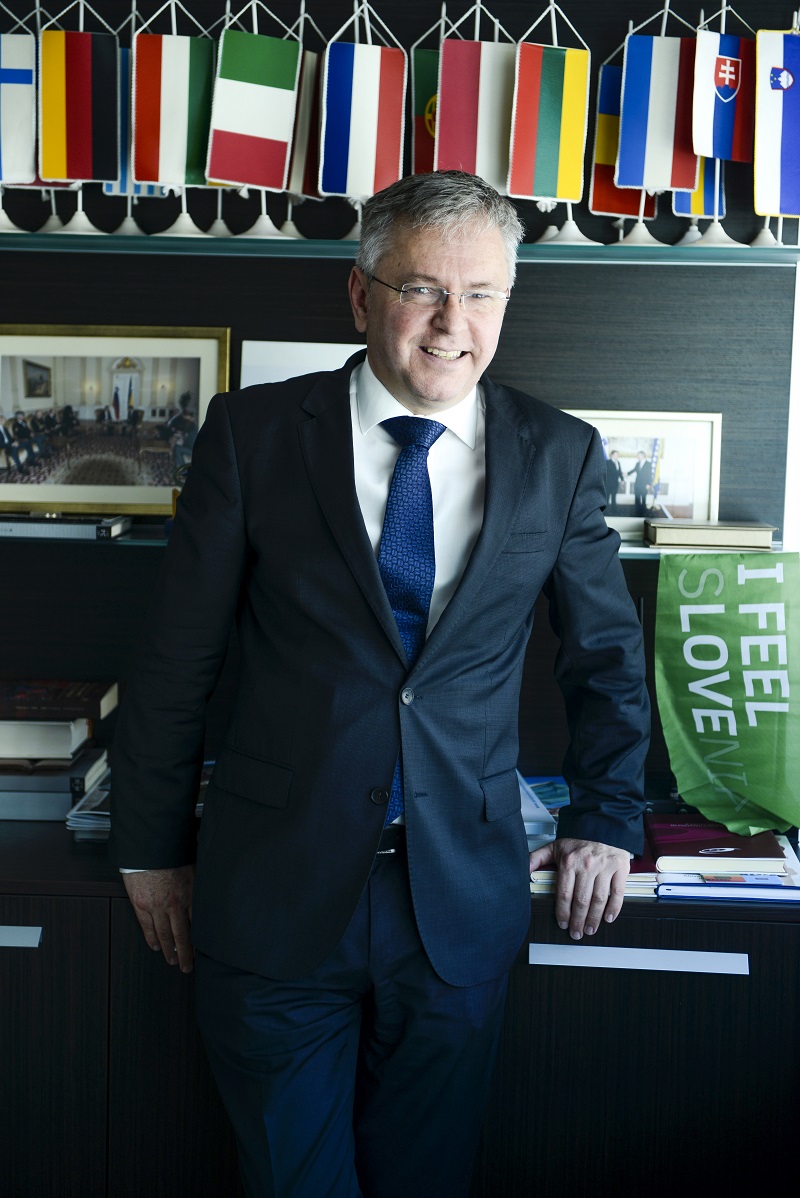 Is there a special moment in your mandate that you’d like to reflect on?

Another wonderful memory will be the opening of the new premises of the Embassy of Slovenia to BiH at 4 Maglajska Street in Sarajevo. The opening ceremony took place on October 10th 2016. It was a joint project and investment of the Republic of Slovenia and a company from BiH which constructed the building to meet all the requirements that the Embassy needs to function successfully. 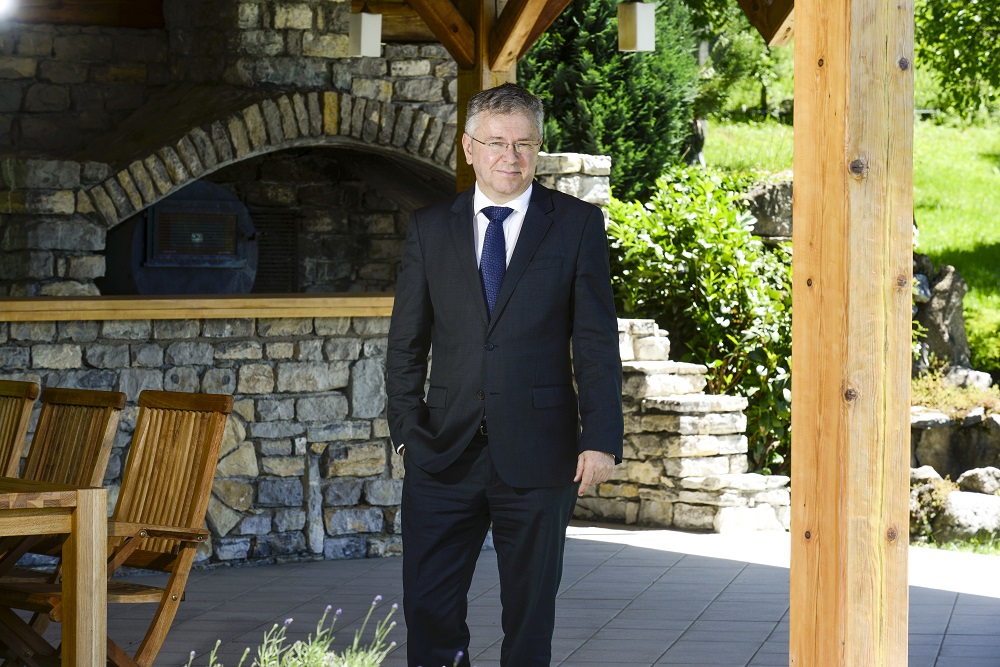 So far, you’ve held positions on behalf of your country related primarily to economy, which is your field of expertise. Is there a recipe to help enhance economic development in the Balkans?

– Ever since I began to work in the Slovenian diplomatic service in 1991, economic diplomacy has somehow been my favorite area of economy and the one I was most familiar with. The main problem in our common region—Southeast Europe—is the fact that our global competitiveness is declining and we are becoming less recognizable globally. Stability and economic attractiveness of the Balkans are in essence simple recipes for prosperity across the region. Instead of bringing to mind wonderful countries with numerous resources and talented, educated people, the term “the Balkans” connotes instability, complexity and a lack of competitiveness way too often.

In your opinion, what could BiH exploit in this regard?

– BiH has an excellent geostrategic position on the route from the Mediterranean Sea to Central and Eastern Europe. Human potential is crucial for any country. There are so many talented and highly educated people in Bosnia and Herzegovina, and this potential needs to be put to use. This also includes Bosnians and Herzegovinians whose potential is used in the diaspora.

What advice would you give to the young people?

– I’d advise the young people to be proud of their beautiful country, Bosnia and Herzegovina, and to have faith in their own abilities and knowledge. Education that they can receive both in BiH and in the European Union is especially important. 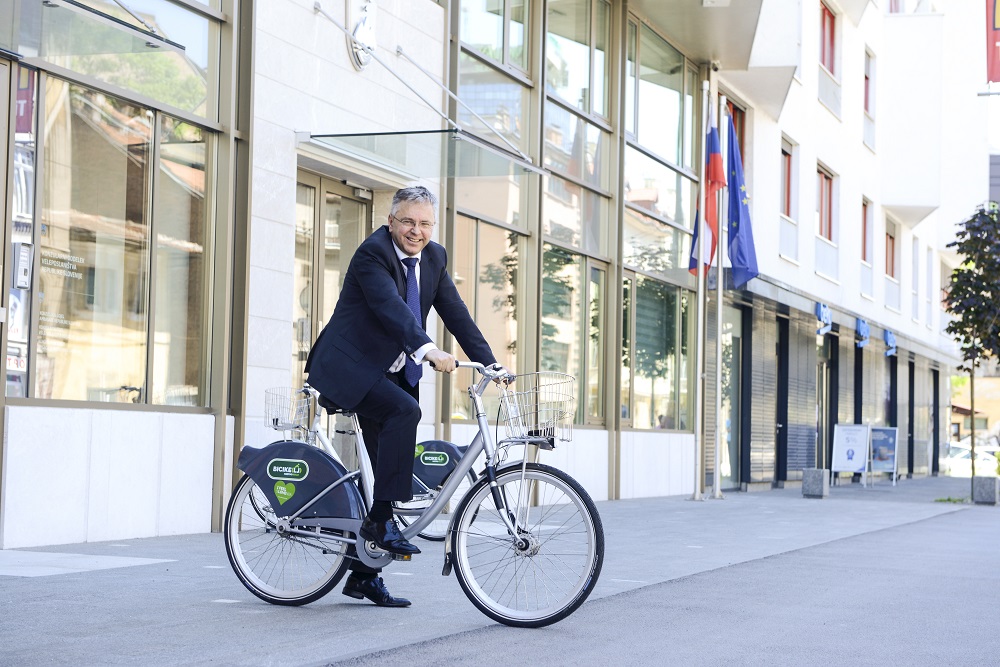 SLOVENIAN LIFESTYLE IN BOSNIA AND HERZEGOVINA

Tell us, what’s your perception of BiH?

Are there any specific places that you like to visit?

– My family, I may say so, lives a Slovenian lifestyle in BiH. We use our free time to the fullest. Especially in wintertime, we enjoy everything the three Olympic Mountains surrounding Sarajevo have to offer, and in summertime, we explore all the wonderful sights in BiH: from Neum to Mostar and Banja Luka to Bihać and other amazing places across the country. 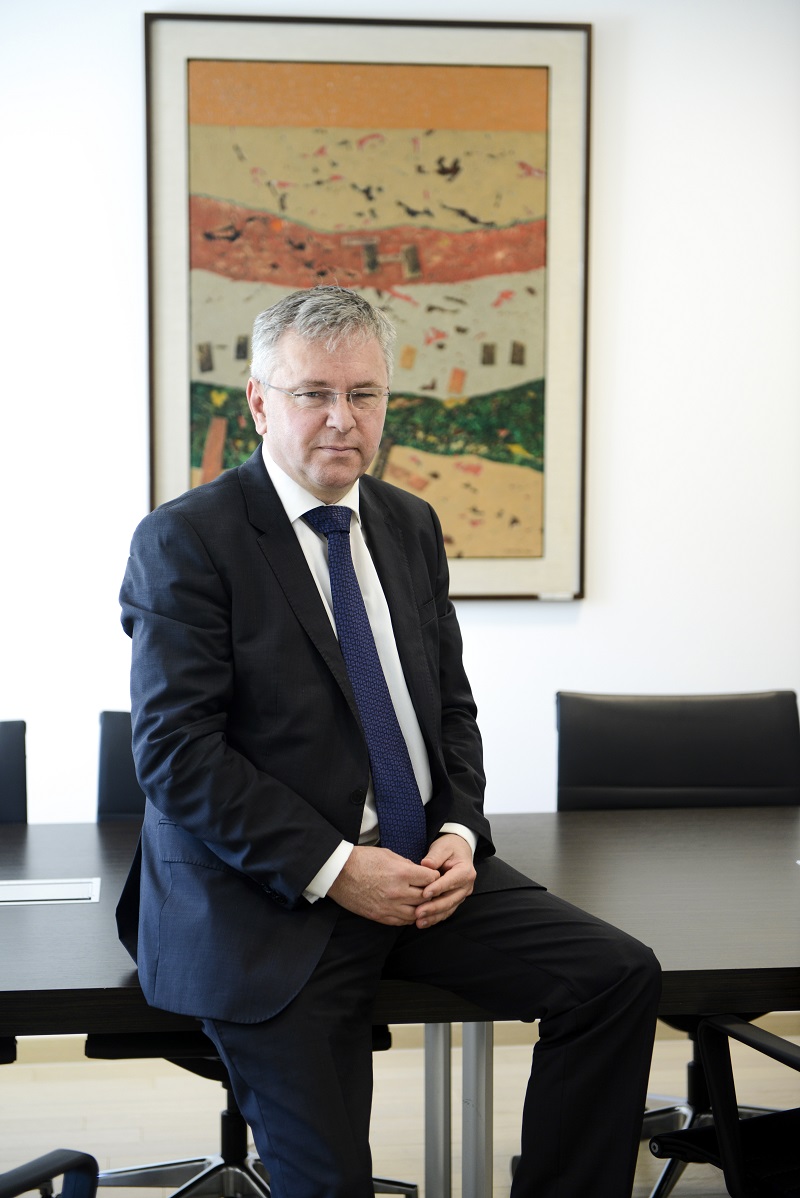 Could you describe your life in Sarajevo for us?

– There are a few cities that I love very much, but I’d point out two of them: Ljubljana, the city I’ve lived in since I was one, and Sarajevo. Life in these two cities happens in a similar way. During our stay here, we make an effort to become familiar with and experience all the advantages this city and country can offer. On weekends, for example, we head out on field trips to places around Sarajevo, but we also think that Kreševo is a very nice little town, then Fojnica, and Kraljeva Sutjeska is certainly a must-see.  We, the Slovenians, love snow and we love the sea. When the cold winter days come, my entire family takes part in classic winter sports, particularly skiing and skating. In spring, we usually go in a different direction—to the south, to Herzegovina and Southern Dalmatia.

If you needed to describe Sarajevo in three words, what words would you use?

– The capital city, dynamic and diverse. Both historically and traditionally, Sarajevo is the capital and largest city of Bosnia and Herzegovina. It provides for numerous activities in the field of culture, sport, diplomacy—because of the heavy presence of the International Community in BiH. Slovenians love Sarajevo because of its cultural and religious mix, its architecture and its diverse lifestyles. 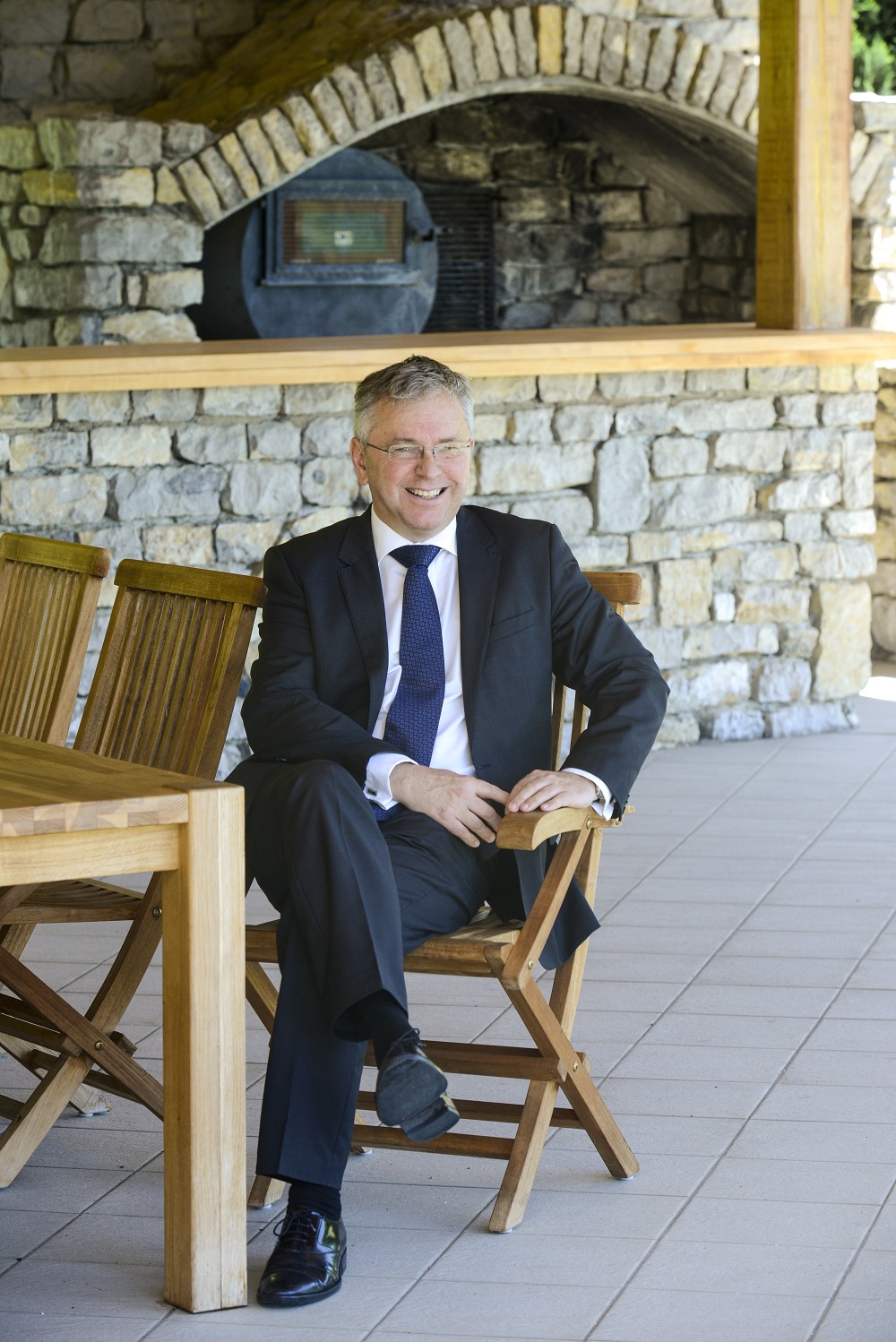 It is summer travel season. Where do you like to set out on vacation?

– In four years of living in BiH, we spent our vacations on the mountains surrounding Sarajevo, in Herzegovina and Dalmatia, but in Slovenia too.

Which of the countries that you have visited do you find particularly impressive in terms of culture?

– I find that the BiH culture is very special. I was born in a country which was common to us. Slovenians have always admired the Bosnian and Herzegovinian culture and diversity. That’s why a lot Slovenians are so eager to come and visit BiH.

Finally, what country do you wish to go to on your next diplomatic mission?

– We try not to stay in a country for too long, and after our mandate expires we always try to combine the location of our new foreign service position with Slovenia. That’s why Ljubljana will be the next destination of my diplomatic mission. 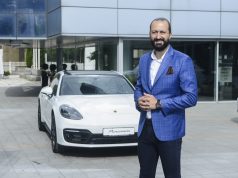 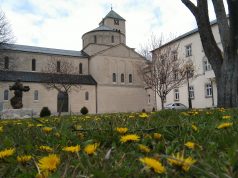