“My greatest treasure is the reputation I’ve earned in my life, being appreciated as a person” 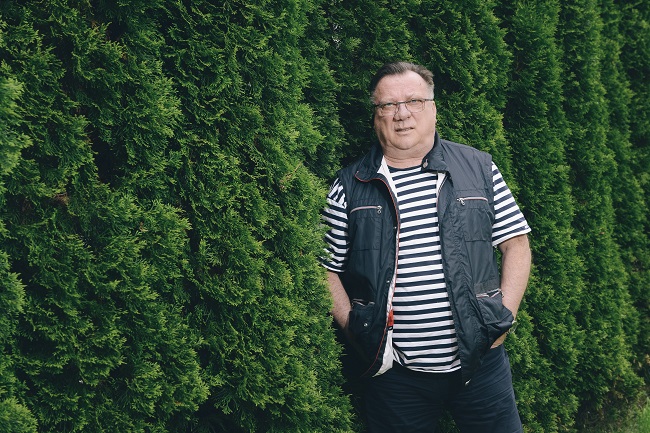 “When we were kids and we’d get a chocolate bar, we’d be happy for days on end. Even though times were poor when I was growing up in the countryside, we didn’t whine about it. Whenever I mention my childhood years, I say I was happy, but now people keep emphasizing how unhappy they are, and this bothers me a little. People possess many things, but that’s what a consumer society is about. You need to know how to distribute money.”

It is not possible to come across someone from B&H and the region who does not know who Halid Bešlić is. People often perceive him as a personification of the Bosnian spirit. He is a cordial man who keeps an open mind to people and life… if you interpret him freely, he is like our former ancestors, the Bogomils, who welcome people with open hands, waving at them from medieval tombstones called stećci. People love Halid because he acts down-to-earth as if he had never tasted fame. Apart from good songs, that is probably the reason why he holds a special place in the heart of so many people.

We came to meet him at his private property in the vicinity of Sarajevo where he spends most of his time.

“I have a ritual each day when I get up in the morning, and that’s to come here, have coffee, read the papers or something else, and fully wake up surrounded by nature. This is the place I operate from,” he tells us at the beginning of our interview for Furaj.ba magazine.

I run from the hustle and bustle of the city

What activities do you do most frequently?

– I walk a lot and I think about the next moves I wish to make here. For now, there’s the motel that operates within the gas station I own, but there are two or three new options that I keep turning over in my mind. I could build a home for the elderly, or a hotel, or a restaurant as a separate business. I have a wonderful piece of unused land and I’m keeping it as my oasis for a while. 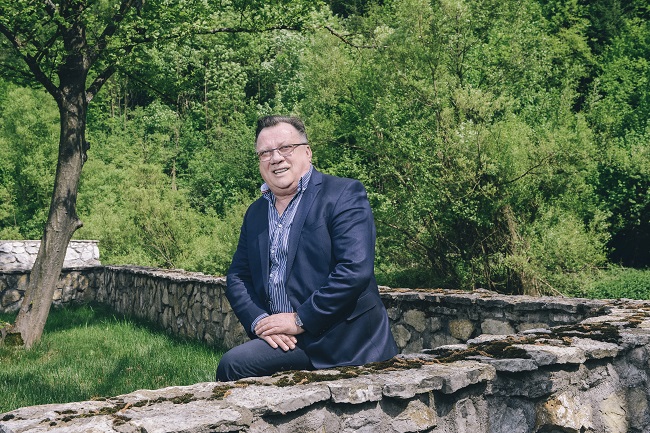 Who are the guests that you host at your motel?

– My family members come here, my grandchildren most of all, and they’re the reason why I built a small playground so that we could spend some quality time together. This is, in fact, our vacation home, because I own an apartment in the motel.

You have an apartment in an attractive location in the center of Sarajevo, but it’s evident that the city’s tiring you out. What do you run from the most?

– From the hustle and bustle. A thousand questions in a minute. You can’t answer people’s questions. The atmosphere in the city has been gloomy especially after the war. I hear negative stories, people whining all the time, and it’s tiring. It’s different around here. I’m getting older, I’m no longer young and able to take it all. Sure, there are a few places in Sarajevo where people of my age get together, people I share common interests with.

–  I do, but with me, it’s a mission impossible (laughs). I usually go to čaršija when guests come for a visit, because I want to show them what we have.

What do people usually tell you when they approach you?

I Enjoy the Small Things

Next year marks the 40th anniversary of your music career—40 years since you released your first single. Do you have any plans?

– I haven’t even thought of it. You just gave me an idea. I entered the music industry before that. If I take into account my activities in the industry, my career started with the release of my first single, but before that I had sung in cafés for five years, so I’ve been on stage for 45 years. When I look back, I find that singing in cafés in Sarajevo was the best part of my life. I was young, I wanted to prove myself; it was easy to do whatever you wanted. Later on, you start having all sorts of problems, but I remember how happy I was when I released my first single. Nowadays, when something wonderful happens, I’m not quite as happy as I used to be back then. 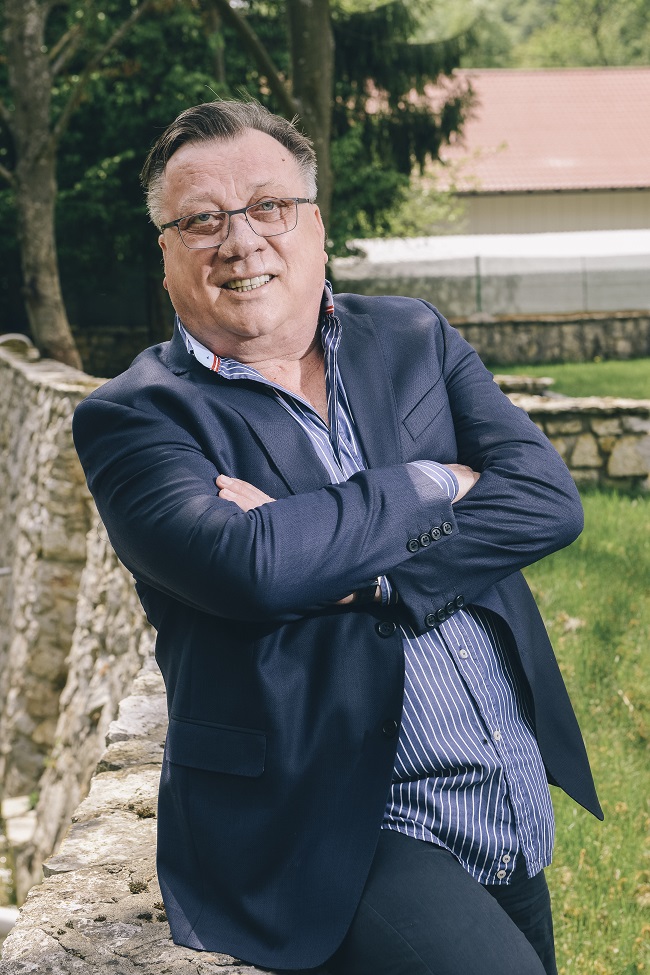 When you entered the music industry, did you want to be a music star?

–  At the beginning, I just wanted to record a song, I thought that was a big deal. I hadn’t thought of the success I’d come to achieve afterwards, but that’s how things usually come to be. Now the story’s coming to an end. I’ve reached the age for retirement, the age of a veteran.

The music scene has changed, but you’ve stayed true to a good song. Which criteria do you use when selecting your songs?

–  I have to like the song. I’m so experienced in the music business that there’s no way for me not to recognize a cheap song. I grew up surrounded by professionals and there’s a certain level of quality that’s not to be lowered. Maybe I wouldn’t have recorded some of the songs I did earlier, but the number of such songs is low compared to the number of good songs, hits and mega hits. I never sing other singers’ songs, which is rare for singers in the music industry. I just add a few traditional Bosnian songs (sevdalinka) to my repertoire story when there’s a festivity or a concert. That’s how I set it up.

You’ve experienced everything that having the reputation of a popular singer brings with it, but what would you say is the greatest treasure that hard work has brought to you?

– My greatest treasure is the reputation I’ve earned in my life, being appreciated as a person. People tend to exaggerate a bit when it comes to who I am, so they praise me too much. My attitude towards work and people has been fair. All kinds of things happened in my life, from wars to charity concerts and helping people out, but everything I’ve done was worth it. I’m happy and content with it. Whatever happens, happens and passes, because everything has a beginning and an end. A plane takes off and lands, and life is the same.

You are unique because being famous has not changed you. What was the crucial factor in your ability to remain a simple man?

–  I’m that type of man, as Josip Pejaković puts it – that’s just the way I am (laughs). I enjoy the small things in life, things that are simple and natural. Nothing that’s forced on me doesn’t work for me, and I don’t like vanity. Everyone has their story, life, manners. That’s who I am, by nature.

You’ve traveled the world. What makes you stay in B&H?

–  Other countries are beautiful too, but I was born here and that’s more powerful than anything else. You can’t change who you are. I’ve been fortunate enough to travel. When I grow tired of it, I can do something else instead. They say that the place you were born in is the best place to be, the best food for you is there and so is the climate.

–  I love the seaside, the Adriatic Sea, and there’s one country that could replace B&H only if it weren’t so far away. That’s Australia, because the climate in Australia suits me. Anyway, I’m not a fan of skiing and I don’t like snow, even though I was born in Mount Romanija. We have winters that last for four-five months, real winters that last for five months, which is too much for someone who likes the spring, fall and summer seasons. However, when you reach Australia you immediately want to come back home, because you feel as if you’ve reached the end of the world.

You’ve always emphasized how important your family is to you, and nearly four years ago you became a grandfather to twins Lamija and Belmin Kan.

–  They are the apple of their grandpa’s eyes! Those two wake me up in the morning. They come every day, as my son Dino lives next door to me. I always sleep in, but as soon as they’re up, they come to me. They keep bugging me to play ball with them (laughs). We play together.

How do you cope with aging?

– I care about what I eat. After the car crash, I gained some weight and had a hard time dealing with it. I practically cut out bread and sweets altogether. When I quit smoking, I gained 25 kilos. I’ve lost 15 kilos since, and have ten more kilos to lose. Also, I still haven’t dealt with the problem I have with my nose, so I’ll have to undergo surgery in order to breathe properly as well. I’m at a serious age, 64, but I’m not afraid of aging. My life is perfectly organized the way it is, and each stage of life has its good moments.