Even though this custom dates back to ancient times, attaching a love padlock to a bridge has become quite widespread because of the renowned Paris bridge Ponts des Arts where more than a million couples locked their love forever. France is not the only country with a love bridge—many picturesque and charming towns in Bosnia and Herzegovina have a love bridge too.

A pedestrian iron bridge at Skenderija, known to Sarajevans as the Eiffel Bridge, is the place where many a lover began to attach love padlocks. The choice of this place to lock love at is symbolic and linked to the world’s most romantic city. Namely, it is believed that this very bridge was designed by Alexandre Gustave Eiffel, the celebrated architect who designed the Eiffel Tower, the symbol of Paris, even though there is no written evidence to corroborate it. Courting couples attach love padlocks to the bridge connecting the two banks of the Miljacka River, but others also leave love messages, banners and similar items there. There is a heart located half-way across the bridge so you can take photos with a lovely view of Sarajevo’s landmarks right behind you.

In the past few years, the young residents of Bihać started to adorn the city bridge connecting the left and right bank of the emerald-green Una River in order to express their love in a modern way. All couples wishing to lock their love forever above this remarkable river, will see for themselves just how hopelessly romantic this bridge is. The city bridge treats you to the views of the old part of Bihać: the Captain’s tower (Kapetanova kula) and the tower of St. Anthony’s Church, while the Una River bubbles below you. This is where you will wish your love to be endless and for you and your beloved to be the one and only love to each other, just like there is only one true Una River.

The hopelessly romantic city of Banjaluka has got its very own love bridge. Love padlocks are fastened to the suspension bridge in the Srpske Toplice neighbourhood, which used to be called Gornji Šeher. It is a pedestrian bridge connecting the banks of Vrbas in the oldest settlement situated at the foot of Banj hillock offering wonderful views of the surrounding area of outstanding natural beauty. Tread lightly across the adorned, slender bridge and throw away the key—let Vrbas take it where it would never be found again!

City Bridge in Sanski Most

Azra and Emir, Emir and Adna, Haris and Azra… are just some of the names inscribed on love padlocks fastened to the city bridge above the Sana River. That is how young residents of Sanski Most adorned the bridge which affords visitors the best views of the town. If you decide to lock the love padlock of you and your loved one above the Sana River, we would recommend you to do it at night. Go for a walk to the bridge, take a seat on one of the two balconies on the bridge where passers-by can rest, look at the river cascading underneath the bridge and the magic unfolding below you, take in the town lights and make a wish for an everlasting love, as bright, serene and beautiful as everything else you can see around you! 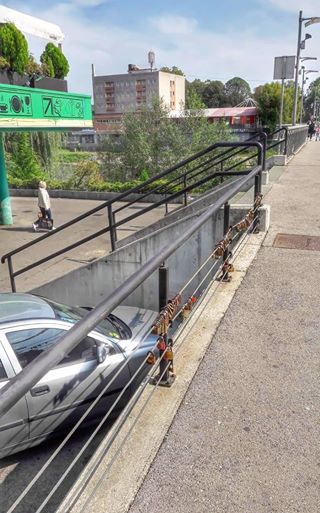 Eiffel Bridge or Plivski most in Jajce

Within a short distance of the only waterfall situated in the town centre in the world, in the royal town of Jajce, is the place where Plivski most or the Eiffel Bridge is located. While the bridge offers surreal views of Pliva River’s lasting place, its cast iron railings are completely filled with love padlocks engraved with names, dates and messages of various kinds. A chain was put on the sides of the bridge so that lovers could attach their love padlocks to it, before throwing the key in the river as a symbol of eternal devotion. Lock your romance at the most romantic place in town, take a walk to the mesmerising waterfall and enjoy the fact that you have united your love for eternity in the former royal seat of the Bosnian Kingdom!

The custom of locking the “two souls that love each other” together dates back to ancient China, to the 1st century BC. At first, couples locked the love padlocks with their initials, but later on, other couples inscribed their names and messages too, and then throw the keys into the river below the bridge or somewhere else so nobody else would be able to “unlock” their hearts. The custom of locking one’s love was practiced in Bosnia and Herzegovina as early as in the 18th century.

The renowned bridge in Paris is no longer a love bridge. After a portion of Pont des Arts collapsed under the weight of one million padlocks in February 2014, the city authorities decided to clean it up completely so they removed 45 tons of padlocks that weighed down the bridge.