Home B&H Medjugorje, A place where the sky is kissing the earth

Since the day when the Blessed Virgin Mary had first appeared in Medjugorje, the village grew into one of the major Marian shrines. Nowadays, it is often compared to Lourdes and Fatima. A number of pilgrims attest they have found their peace and faith in Medjugorje. Each year, more than a million persons from all over the world visit The Shrine of the Queen of Peace. 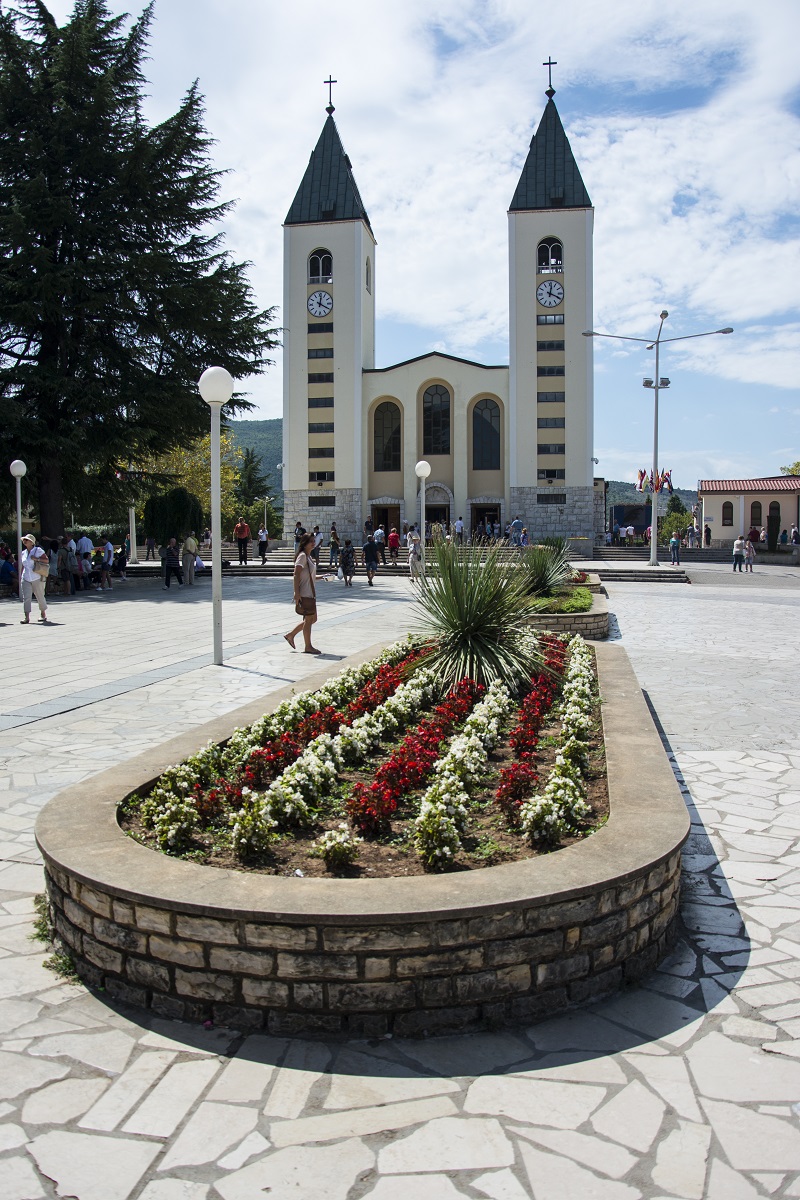 Medjugorje is a Herzegovinian parish located 25 km southwest of Mostar. Marian apparitions, first recorded in Medjugorje in 1981, made this village one of the most famous Roman Catholic pilgrimage destinations of the world. From Medjugorje, Our Lady (Gospa) is sending messages about peace, faith, conversion, prayer and fasting, both to the parish and to the world. As the visionaries described, she always stands on a small, whitish cloud, wearing a white veil and a crown made of stars, dressed in a simple, long dress. And they said her beauty cannot be put in words. It is not of this world, but „made in heaven“.

On June 24, 1981, six young people from Medjugorje claimed that Our Lady appeared to them on the hill Crnica, in a place called Podbrdo. This will make the village famous in the whole world. From that moment on, the life of the parish began to change. Before, the inhabitants had lived just like other people in the area. They worked on the land, planted tobacco and vineyards, produced wine and vegetables. Due to social circumstances, many were forced to leave their hearth and look for a better life.

Therefore, the phenomenon of Marian apparition eventually transformed an ordinary village into one of the largest religious centers. More than a million people per year come from all over the world looking for spiritual peace, conversion and consolation, making Medjugorje one of the most attractive tourist destinations of BiH.

Pilgrims gather daily, weekly or annually, and there are three places everyone wants to see. The first point is the Apparition Hill, above the hamlet Podbrdo (in a place called Bijakovici), where the visionaries claim they saw Our Lady for the first time. Since the first apparition, the pilgrims praying the rosary can be seen around this place at all times. Day or night, there are always groups climbing to the place of the first apparition, which is marked by a bunch of rocks and an embedded cross. Krizevac, a hill above Medjugorje, is also a privileged place of pilgrimage gatherings.

In 1934, on 1900th anniversary of Jesus Christ’s death, residents of Medjugorje had installed an eight-meter high concrete cross in this area. Since then, groups of believers and individuals perform devout ritual Stations of the Cross, going from station to station. The Eucharist and sacramental life are celebrated in the parish church and the surrounding area. As the parish itself, the church is also dedicated to St. Jacob the Older, the apostle and the patron of pilgrims. Next to the church there is also an altar for outdoor celebrations, and a number of confessionals, along with the chapel for Eucharistic adoration and rooms intended for seminars and spiritual discussions.

The celebration of the mystery of salvation is the main event for pilgrims who stay in the Shrine, when they experience encounters with the mystery of faith. In Medjugorje, preaching is done in a simple manner, attempting to reveal the way to realization of the Gospel in life of a modern man, through celebration of peace, prayer, fasting, forgiveness and acts of love – the messages sent by Our Lady.

The story from Honduras witnesses the impact of the Shrine of the Queen of Peace on pilgrims’ hearts. In Honduras, a replica of Medjugorje was made in dedication to Our Lady, where believers are trying to reach the spiritual growth while waiting for the new opportunity to visit BiH. The replica was created in a small town named Danli, which is now affectionately called Hondugorje.

Undeniably, Medjugorje attracts the pilgrims and sets them in motion. They are leaving the parish grateful for the deep spiritual experiences. Some of them are trying to start a new life carrying the essence of the Messages, which are believed to be sent by the Virgin Mary herself, within their hearts and acts.