In the north of Tokyo, in a mountainous area known as Tochigi, Nikko, a town that has been renowned for centuries as a place where numerous temples and shrines of exceptional architectural and artistic value are hidden in a wonderful natural ambiance, is situated. 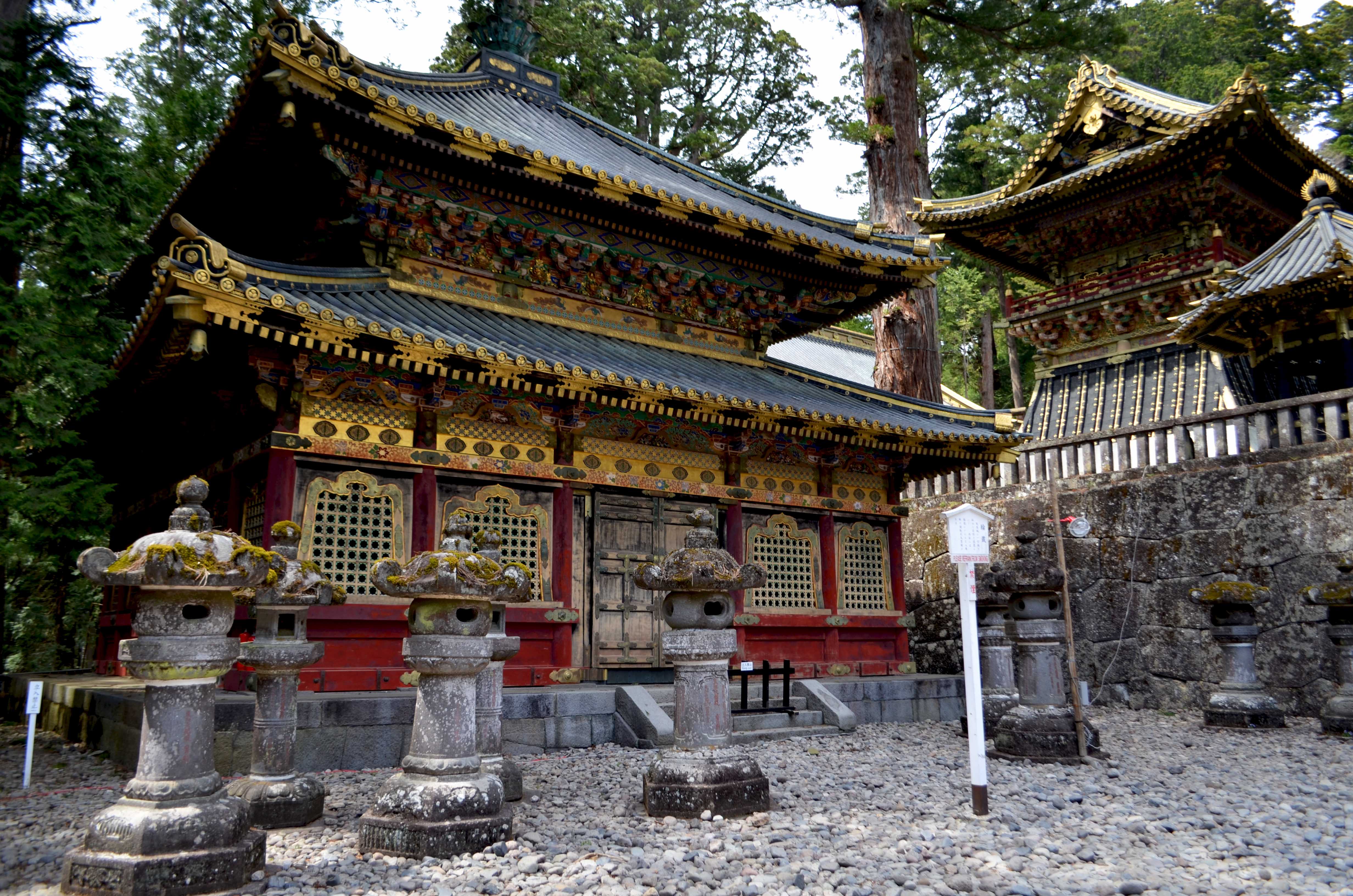 The Nikko complex of temples and shrines in Nikko consists of 103 buildings nine of which have the status of a national treasure, and the remaining 94 of them have the status of a cultural monument. The Nikko temples have been inscribed on the UNESCO List of Cultural Heritage sites in Asia.

The Sacred Bridge, Shinkyō, which leads up the entrance to the complex, is one of the three most famous old bridges in Japan. This vermilion lacquered wooden structure was built in 1636. Its red color is typical of Japanese torii gates (sacred gates).

The first temple you will come across is also the most famous one in Nikko—Rinnōji Temple, which is the first Buddhist temple in Nikko founded in the 8th century by monk Shodo Shonin. Sanbutsudo Hall, the main temple, houses large, gold lacquered, wooden statues of Nikko’s three mountain deities: Amida, Senju-Kannon (with a thousand arms) and Bato-Kannon (with a horse head).

Tōshōgū Shrine is the final resting place of one of the three most famous Japanese samurai, the founder of the Tokugawa Shogunate, Tokugawa Ieyasu. This shogunate had ruled Japan for more than 250 years, and a thousand years later, in 1898, the Tokugawa shogun was toppled and the power and the throne was handed back to the imperial dynasty. Ieyasu is enshrined at the temple as the deity known as Tosho Daigongen (Great Deity of the East Shining Light).

A five-storied golden pagoda located at the entrance of the Tōshōgū Shrine can only be seen from the outside. Its interior can be seen only on special occasions.

Within the complex there is a Sacred Stable bearing a world-renowned relief carving of the Three Wise Monkeys, who respectively Hear no evil, see no evil and speak no evil. The monkeys symbolize Confucius’s moral code related to the human life cycle. 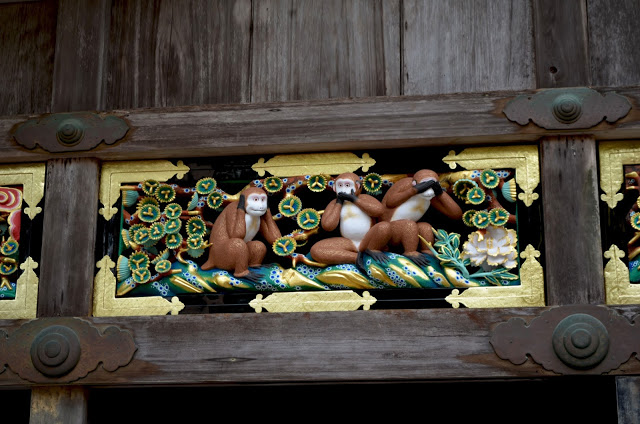 One of the most popular sections of the complex is Yomeimon Gate. Beyond it is the main shrine building, which consists of the praying hall dedicated to the spirits of Japan’s most distinguished historical figures from the Middle Ages—shogunate rulers Tokugawa Ieyasu, Toyotomi Hideyoshi and Minamoto Yoritomo.

To the right of the main shrine building is the Sakashitamon Gate, whose transom bears the famous carving of the Nemurineko (sleeping cat). Sakashitamon marks the start of a long flight of stairs that leads uphill through the woods to Tokugawa Ieyasu’s Mausoleum. 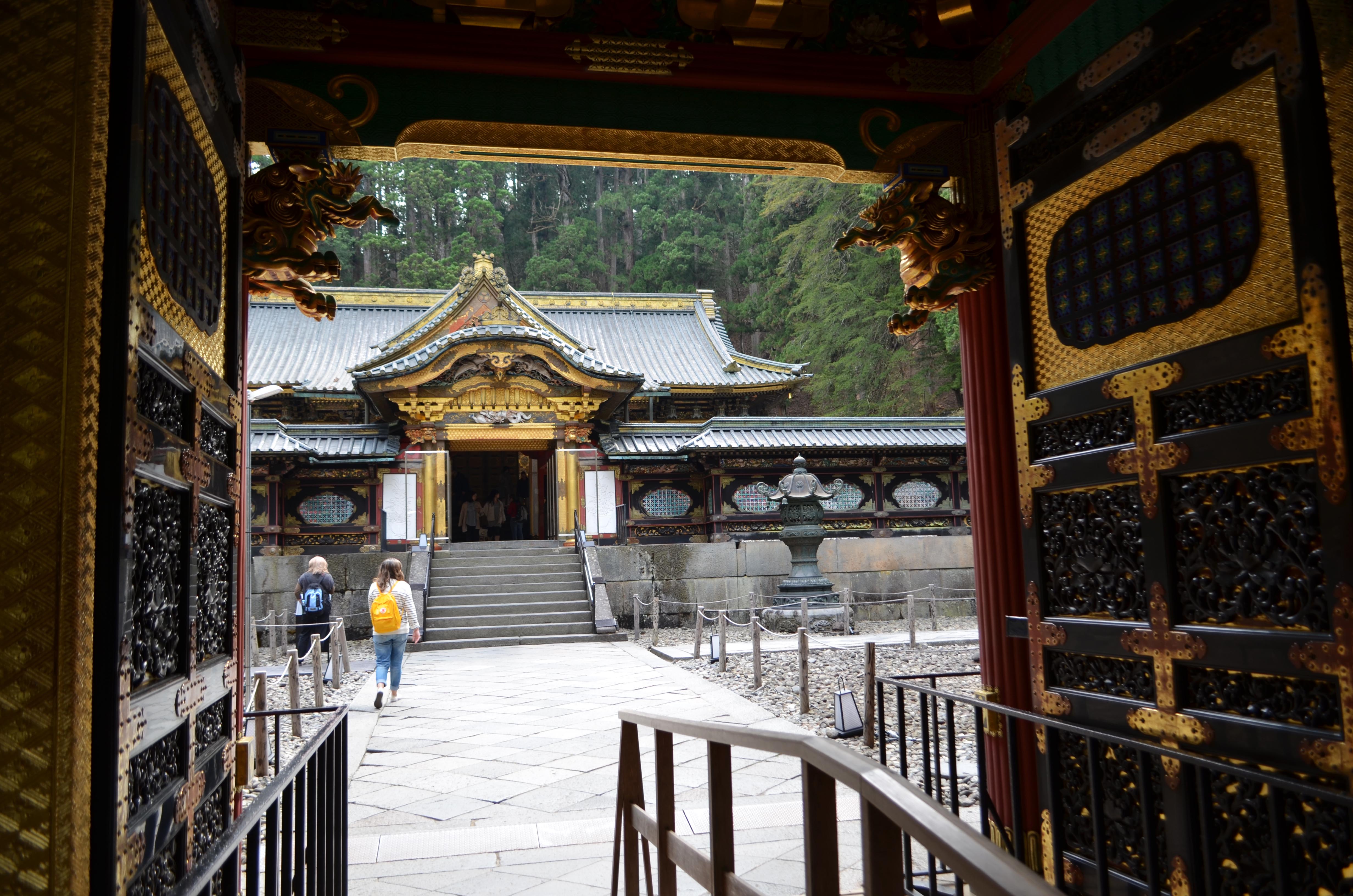 Taiyūinbyō Shrine is the mausoleum of the third Tokugawa family shogun, Iemitsu, the grandson of the famous shogun Tokugawa Ieyasu. Taiyuin is the posthumous name of Iemitsu. If you go through the Nitenmon Gate, which is decorated with two heavenly kings and two wooden towers on both sides, you will arrive at the Karamon Gate which stands in front of the praying hall with a sculpture of a white dragon. Over time, Taiyūinbyō Temple became a part of Rinnōji Temple. In its immediate vicinity is the Tamozawa Imperial Villa.

Nearby is the Futarasan Shrine, shrine of the female deity known as Takinoo, which protects women and those seeking love. The shrine was also founded by Shodo Shonin in the 8th century.  It is dedicated to the deities of Nikko’s three most sacred mountains: Mount Nantai, Mount Nyoho and Mount Taro.

In addition to the temples and shrines referred to above, there are other landmarks in Nikko worth mentioning such as the 35-kilometer long Cedar Avenue (a tree similar to fir tree), the world’s longest tree-lined avenue. In the city, there is a botanical garden established at the beginning of the 20th century which houses around 2200 plant species, as well as Nikko National Park which features Chuzenji Lake, a fascinating 97-meter high Kegon Waterfall and numerous geysers and quite a few picturesque tourist trails. Beyond the complex, but in its immediate vicinity, Nikko Toshogu Museum (Homotsukan) is situated. It was open in 2015 on the 400th anniversary of Tokugawa Ieyasu’s death and is home to an impressive collection of personal belongings of the late shogun such as weapons, a shield, a writing kit, personal letters…

Nikko is really a unique and a must see place anyone should visit because it genuinely depicts the spirit of Japan’s rich culture and tradition.