Walking down the streets of Bascarsija, you will get to a turning point, and Sebilj will arise on your left. Just a step away from this unique monument, in a small street on your right, the copper souvenirs and the sounds of coppersmith tools will call for your attention. Suddenly, you will realize you are in Kazandziluk, in the street of coppersmiths, the masters of an old craft brought to B&H long ago by the Ottomans. 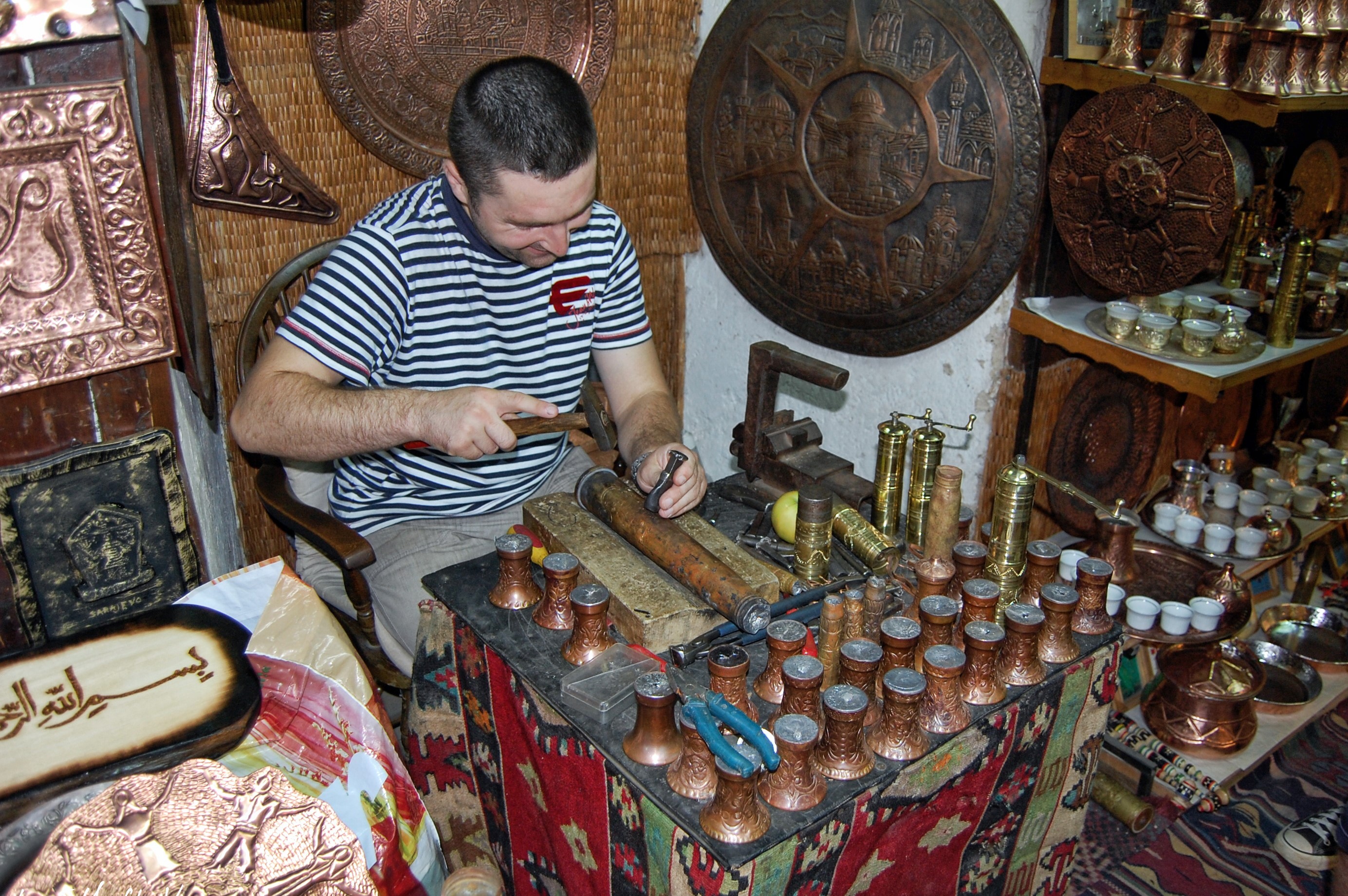 The first coppersmiths in Sarajevo were mentioned in 1489. As time passed by, they grew in number. Therefore, at the beginning of the 16th century they formed a guild (esnaf). Some families were in this business for more than 150 years. Moreover, as mentioned in historical papers dating from the beginning of the 18th century, this was the first guild whose members started trade of copper, tin and coppersmith products. Formation of a specific workshop for arts and crafts during the Austro-Hungarian rule was an additional encouragement to development of this craft.

Slowly step into a workshop owned by Hajji Mirsad Brkanic. Since 2005, this coppersmith has been listed as UNESCO World Heritage. As a small boy, he wished to learn and continue his father’s and older brother’s coppersmith work. He was raised this way. As Mirsad explained, all the families engaged in traditional crafts that are more than 500 years old wished to have a male child. Not only to inherit a family name or the property, but the craftwork as well. To keep the business in the family.

His education of a future coppersmith began when he was only ten or eleven years old: that is, when he grew old enough to come to the workshop by himself and bring his father a lunch. The father motivated him wisely and discreetly, praising and rewarding his first steps into the future of a craftsman. At first, he used to keep him in the workshop for a while. Mirsad’s job was to hand his father the tools, so he would have learned their names. When he turned twelve, Mirsad had already started doing some easier tasks himself, e.g. decorating small plates.

“The first products we made were given to strangers for free, as gifts. But our father was convincing us they were sold. We were so happy that somebody wanted to buy our creations, so we worked even harder to create more beautiful pieces”, Mirsad recalls.

Apart from the family business, Mirsad also graduated on the Faculty of Mechanical Engineering. Although he had worked as an engineer, he remained faithful to his craft. Twelve of his close family members make him particularly proud: the high quality coppersmiths who are also in the business. The youngest member, Mirsad’s 9 years old grandson, surpassed the tradition and started coming to the workshop when he was only seven. He insisted on holding a hammer in his hands, and started getting used to its sounds very early. 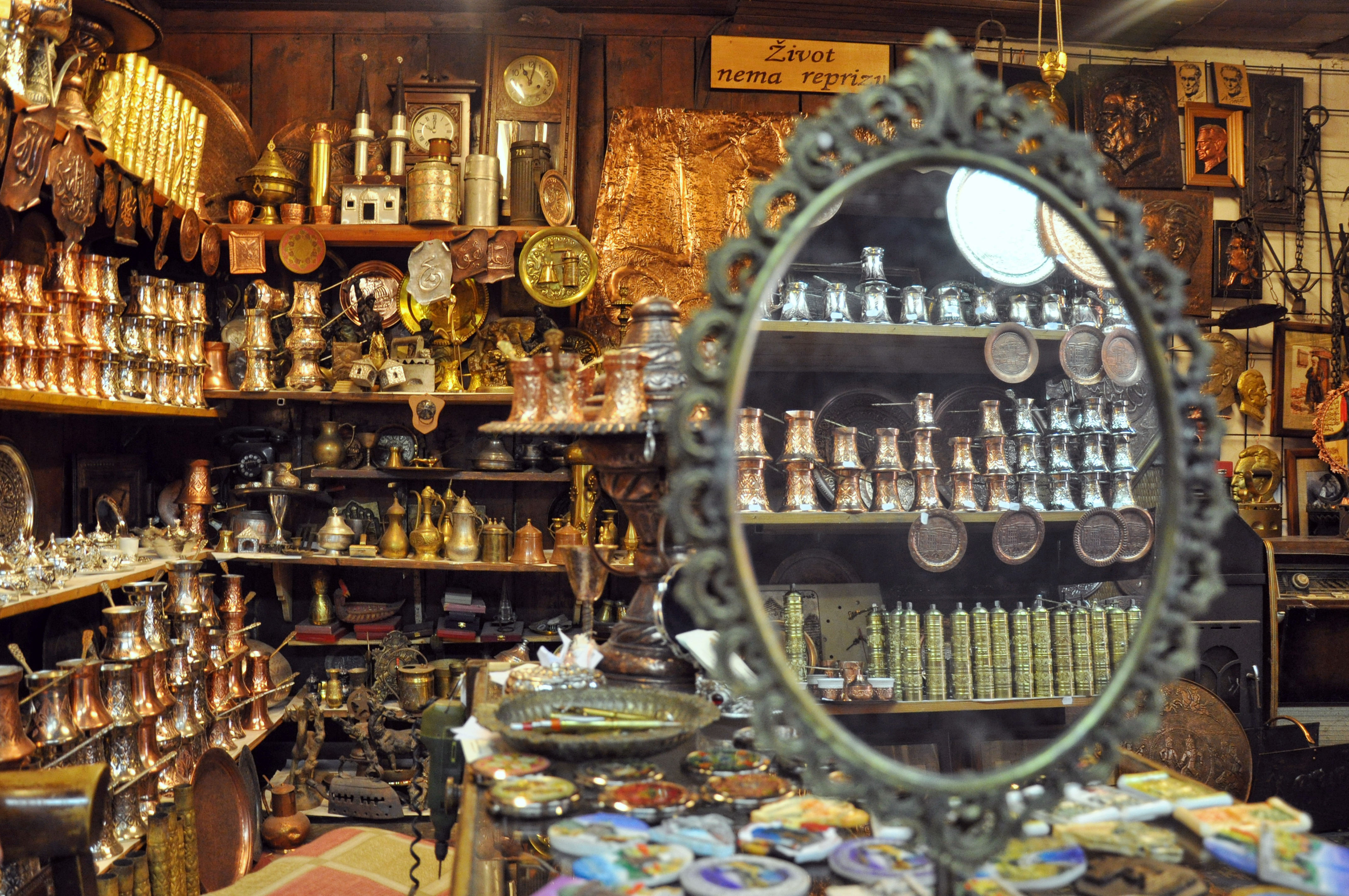 Nearby, we passed by another workshop, the one owned by Mirsad’s son, Vedad Brkanic (41). This year, he is celebrating 20 years as a professional coppersmith.

In these modern times, when there are so many attractive professions, it was surprisingly soothing to hear someone saying: “I am happy with my job”.

Asked if the job ever gets monotonous, he explained: “That could never happen. You always want to make something more beautiful than you did before. In fact, you are constantly competing with yourself. I am always trying to make ornaments that are even more challenging than those I made before. It is like a video game with no end. There are many levels, but you can never get to the end.”

Another workshop in Kazandziluk belongs to Ismet Alagic. His story with coppersmith craft began as he turned 15, old enough to start the vocational training.

“For three years, I was taught by the best craftsman in Bascarsija, Asim Jabucar, may he rest in peace. I stayed there for two more years to practice my skills. Afterwards, I have opened my own workshop, the one where I have kept working to this very day. I have spent last fifty years in this street”, stated Ismet. Entering his workshop, a visitor cannot but notice a large tray on the left wall, approximately one meter in length. Ismet refers to it as his masterpiece, emphasizing it is a 20 years old product. But the tray is not the only one of this type. Other walls in the workshop are also decorated with the two trays of the same size. The price of each is the same – 2500 BAM.

On the same side of the street, slightly ahead, toward the entrance to Kazandziluk, we have reached a young, 27 years old coppersmith, named Jasmin Muratovic. He was attracted to coppersmith craft two years ago. Jasmin studied under a well-known coppersmith Nasir Jabucar.

“My experience of art implies something very big, important. It brings plenty of love, attention, interest, acquaintances, and an opportunity to avoid bad things in life”, stated Jasmin, pointing out that he likes everything about his job.

“I do not find anything about it hard to do. One just needs to have a good will, a reason, and be willing to make an effort.”

Kazandziluk is a street shrouded in tradition. Coming here and feeling its creative history still alive and breathing is undoubtedly a well worth experience.