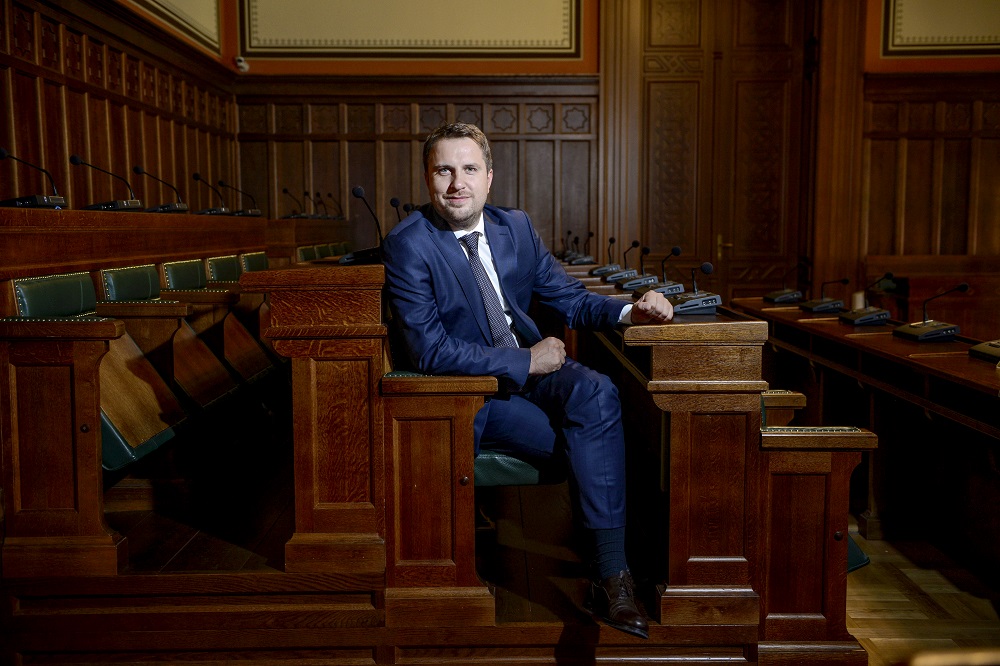 Abdulah Skaka was elected to lead the capital of Bosnia and Herzegovina several months ago, which marked the beginning of the most exciting period of his life.

“Foreigners, and even ambassadors leaving the city at the end of their mission, often tell me that they feel at home in Sarajevo. Our capital is still a place where people find the time for themselves, the time to enjoy themselves, and to hang around with family, friends and neighbors.”

Construction of Bicycle Lanes is about to be resumed

“In February 2019, Sarajevo and East Sarajevo will host the European Youth Olympic Festival (EYOF), and welcome about 1500 male and female athletes from over 40 European countries. BiH Presidency has confirmed that it’s going to be the general sponsor of the event, and the European Olympic Committees have expressed satisfaction with the financial guarantees the BiH authorities have provided thus far. However, this is not just a sport competition; this is an opportunity for a lot of business people, tourists and people who love winter sports alike to have meetings and spend time together.”

Throughout its 555-year long history, Sarajevo was governed by great men. That is why the city’s 38th mayor, Abdulah Skaka, feels extremely honored and privileged to be the mayor of the city he was born in, the city his family lives in and the city he wants to live in, but he is also aware of the great responsibility that comes with the position entrusted with him.

“This is me stepping forward to enter the most exciting period of my life. I’m doing my best to be the mayor for all the citizens of Sarajevo, but also to represent our city on the international scene the right way, through city diplomacy above all, which resulted in Sarajevo becoming a twin city to 28 other cities and member of quite a few important international organizations and institutions.”

What do you see as the greatest challenge involved in being a mayor?

– The very fact that I’m the youngest mayor of Sarajevo, a city of vast possibilities, is a great challenge in itself. The greatest potential in turning it into a brand and commercializing it lies in the rich cultural and historic heritage the city has to offer, the unique mixture of different religions and culture, the amazing natural attractions, the open and hospitable people of Sarajevo and their famed sense of humor, the Olympic Games, the city’s various cultural festivals and sport events, the young people and a growing number of various tourist offers. Our Sarajevo is becoming a successful city and this shows everyone that Bosnia and Herzegovina is also a part of Europe and the world as well as a part of the integrations leading to spiritual and material progress. I’d also like to say that I’m determined to solve the existing problems by raising the level of quality of life in Sarajevo.

During your mandate, what will be your top priorities?

– The current city administration’s program is based on the vision for Sarajevo in 2020 when our mandate ends. According to that vision, Sarajevo will be the capital city of the European Union’s future member state, its economy will be focused on tourism and the rendering of services, it’ll strive to be Bosnia and Herzegovina’s social, economic, educational, political and communication center and will be an indispensible factor in this part of Europe. There are several priorities and, for now, I can reveal only a few of them. Principally, we’ll continue working on projects that started to be implemented in the past, such as the construction of the cable car, completion of the construction of bicycle lanes, as well as the implementation of the youth winter Olympic games: the 2019 EYOF. International cooperation with cities across Europe but also across the world, as well as in the Balkans, is also our priority. We’ll show this at a conference scheduled for August this year. We mustn’t leave out the support we’ll provide to culture, student scholarships, the activities we’ll coordinate with other administrative levels, cooperation regarding different projects, and we’ll also start solving problems related to city infrastructure, the traffic, energy, water and waste water infrastructure.

At what implementation stage is the Trebević Cable Car (Trebevićka žičara) now?

– Apart from being an infrastructural project, the Trebević Cable Car is also a symbol of devastation of a capital which has undergone the longest siege in the history of warfare, but also a symbol of its indestructibility. All preparatory work for the construction of the new Trebević Cable Car is going according to plan. We’ll soon start building the cable car base and end station, and pouring concrete footings for the columns. Based on an international tender procedure, the contract was awarded to Leitner, an Italian company which is currently producing the equipment for the cable car facility. When conditions are met, the facility will be delivered and installed. The cable car will comprise 33 cabins—gondola cars offering panoramic views, each seating 10 passengers, carrying 1,200 passengers per hour in total. Gondola cars will be in the five colors of the Olympic rings colors representing Sarajevo’s multiethnic spirit and unity. When we implement this project, we’ll get an important tourist potential and another location for both the citizens who live in and tourists who come to visit the capital of Bosnia and Herzegovina. On the other hand, the once popular day trip location—Trebević—an oasis of peace and green vegetation close to the big city and an open air spa with the highest oxygen concentration in the area, will be brimming with life again.

View from a viewing Point

If you were to plan a tour of Sarajevo for your guests, how would it look like?

– What to choose and how when this city has so much beauty to offer? Passing through the living oriental museum—Baščaršija, and then the city center, you can hear the murmur of people speaking various languages, because Sarajevo has become a top tourist destination in the Balkans. Sarajevo is one of the rare cities in the world where you can come across places of worship of the world’s major religions—Islam, Christianity and Judaism—in a slow ten-minute walk. The City Hall (Vijećnica), a unique architectural pearl, has become a real tourist attraction. Sarajevo is also a city hosting several festivals among which the Sarajevo Film Festival has grown into the largest regional film festival and a cultural event on the world’s film festival list one cannot avoid. Tourists are also drawn by the buildings constructed during the Ottoman and Austro-Hungarian Empire, such as bridges, museums, galleries, theaters, cafés and restaurants, but numerous day-trip places too: Vrelo Bosne (the Spring of Bosnia), Barice, Čavljak, and Bijambare, as well as the surrounding Olympic mountains: Bjelašnica, Jahorina and Igman. They say, “Whoever drinks water at Baščaršija is destined to return to Sarajevo”. And you can’t live without water. We can’t live without Sarajevo. Perhaps that’s the secret behind its survival.

What are you favorite places in Sarajevo?

– Some claim that all the cities around the world are best viewed from a high, viewing point offering panoramic views. That’s why I frequently decide to invite mayors and other guests to start to get to know Sarajevo from and take a short walk with me around one of the most popular viewing points among Sarajevans—Zmajevac. The White Fortress (Bijela tabija), a fortified medieval fortress, and the Yellow Fortress (Žuta tabija), which is very dear to me, also offer a fascinating view of the city. It’s during Ramadan that I feel particularly good around that place as I witness a hundred-year long tradition of the Bosnian Muslims—the breaking of fast as a cannon goes off to mark it.

What profession did you dream of pursuing when you were a boy?

– Like other boys, I went through a phase when I wanted to become a doctor, a pilot or an architect.

You are married and have two kids. Are you a tough father and what values do you want to teach your kids?

– I faced new life challenges, new experiences, when I got kids. Even though they’re the most wonderful experiences, they’re also, at the same time, full of dread. Both my daughter and my son are small kids, but in spite of it, I realize that they know, see and feel quite a lot. I want to raise them well, help them become good, honorable and diligent people. I’m not tough on them; I try to be fair.

How do you relieve stress?

– Sometimes by working in quiet places, but most of the time by spending time with my family. Also, a good night sleeps helps me to recharge my batteries.

Do you have a favorite old saying which plays an important role in your life?

If you could pick a historical figure of Sarajevo to have dinner with, who would it be?

– That would definitely be the founder of the urban Sarajevo, Isa-beg Ishaković, whose waqf represents the earliest recorded source for exploring the development of Sarajevo, and 1962, the year of its issuance, is the date which marks the city’s founding year. His endowments “cannot be sold or given away, or become somebody’s property by way of full ownership transfer until God remains as the only master of Earth and of everything on Earth; He is the best heir.” I intend to bring back to life certain activities starting from next year which would pay homage to Isa-beg Ishaković in a dignified manner. I’d also like to believe that time would come when we’d rebuild his tekke in the authentic style and reconnect with our roots. Such a building would make the local tourist offer better.