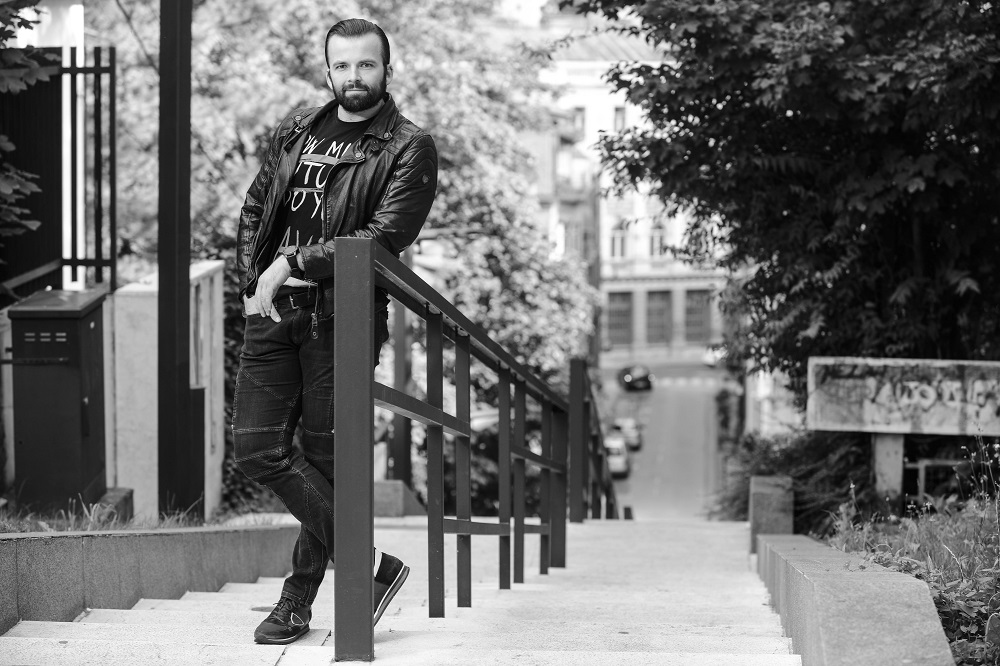 Adnan Hasković: I live for acting

Whenever he appears on a set abroad, he’s different –appearance-wise, by his energy, and acting

He started his career in the theater, but he was always a man of film. He recalls that he discovered his talent by watching TV; he’s been in the spotlight with his performances since kindergarten and as a seven-year-old he got a role in a film, which was disrupted by the beginning of the war. Film is therefore his first love, a medium which he can say more with and it is why, he says today as an accomplished actor, he does acting at all. Even though his time is yet to come, Adnan Hasković (33) is one of the rare B&H actors with an international career who got his big break in films like Venuto al mondo, Snowpiercer and the TV show Legends.

Is it necessary to live in Los Angeles in order to be part of the big film stories?

–  I spent almost four months in Los Angeles with my wife after we, like in the movies, quickly met and married. It was a business trip, as well as our honeymoon. Global access to everything has made it possible for actors to be based anywhere in the world and still have the opportunity to communicate about their jobs with business partners. You can live in LA for a long time, but if you don’t have contacts and access to certain things it doesn’t mean much that you’re going to stroll along the famous Venice or Sunset Boulevard, even though it’s nice, the weather’s great and it’s a beautiful place. Many renowned European actors who made it big in Hollywood don’t live there, like Javier Bardem, Gérard Depardieu, or Vincent Cassel, while, on the other hand, many Hollywood projects are filmed in Canada, Prague, London… When I was in LA, I had a bunch of castings for which I made so called self-tapes, because nowadays live castings happen less often. Then if you get shortlisted, you go there in person, and you can go anywhere for that.

Who’s in charge of your career?

–  An agent in Italy, an agency in London, and as of recently I’m in talks with new agents in America. In my line of work, it’s natural that each year, year and a half, you change your team of people due to growing tired of old ideas and because of different visions. It’s a free market. You are your own boss, your product and it’s normal to surround yourself with people who will do the job at a certain moment better than others.

What’s currently in in Hollywood?

–  There are no rules, as Hollywood is a wide term which includes, among other things, soap operas, and stupid sitcoms. Also, some low-quality actors can sometimes stray into the A category of actors, which is a result of powerful politics and strong lobbies. However, the longest-serving actors are those that God made for this job. If they follow each step consistently, they find their way. Generally, it is indisputable that there has to be quality in order to succeed in Hollywood. It’s desirable to be charismatic and noticeable, and it’s equally important to keep working on yourself and live for your calling.

What do you do for yourself?

–  Apart from carefully selecting my associates, I learn languages, I want to be informed, I communicate all the time, I keep in touch with contacts, educate myself, read, work, train… I’ve started resolving the issue of work permits in the USA and Great Britain. It’s been known to happen that an agency needs to find a new actor for one of the key roles in seven days, they like you at the casting, but as you don’t have a permit collaboration isn’t possible. I want to be ready at any moment. Flowers have to be watered. Otherwise, they wilt.

An anecdote to remember

Dead tired, during the filming of Venuto al mondo Penélope Cruz and Adnan Hasković were unable to evoke the real emotion of fear, surrounded by masked soldiers who were stopping their van in the dead of the night. The scene had to be repeated a record 15 times, and then director Sergio Castellito used a wise trick.

”Sitting in the van during a break, all of a sudden, a soldier opened the door and hit Penélope on the head with a pack of cigarettes, while putting a rifle to my head. He did all these things that were not agreed upon. There was real drama. Just when I wanted to react violently, the extra took off his mask and it was the director underneath it. Sergio dressed up as a soldier in order to provoke what he wanted to get – the natural emotion of fear. Penélope was a little angry, because he hit her with the pack of cigarettes a bit awkwardly. He started hugging us both, and when we watched it back, there was applause.”

In September there’ll be a new film set waiting for you. Tell us more.

–  Emre Coşar, a first-time Turkish director, has an impressive international story, a drama with elements of a psychological thriller. The story is universal and could take place anywhere, just like Hamlet could be in any castle in the world. He’s worked a lot on the executive production of Hollywood movies filmed in Turkey, from the latest James Bond to the film The Water Diviner, which was directed by Russell Crowe. He’s very talented, and his mentor for the film will be the famous European director Fatih Akin.

Do you find it hard to transform for your roles?

–  I had to gain weight for the new role, i.e. get more muscle mass, as I’m playing a sergeant, one of two main roles. Those are all processes I’m used to, and as I love sport I can easily regulate my weight.

Which role do you identify with, with your entire being?

–  In theater I’d go back to the show Legenda o Ali-paši (Legend on Ali Pasha) by Sulejman Kupusović, and on film the role of Gojko in Venuto al mondo, as I was involved in the whole story with my own personal experiences. Actors have to be believable as certain characters, as if they’re not acting. Only identifying with the character brings authenticity. Because of this film, even five years after the premiere, I get messages from different parts of the world on Messenger. I feel excited when I see how far the story went.

How did you find Penélope Cruz?

–  A great professional, a great actress. She has great human qualities and isn’t where she is for no reason. I believe that God always rewards you when you’re a great person, as well as a professional.

Who did you find most fascinating from all the famous actors you’ve worked with?

–  Emile Hirsch and Penélope Cruz left the biggest impressions on me, as well as her husband Javier Bardem, who spent a lot of time with us on set. In essence, they’re all wonderful and normal people. And Tilda Swinton, and the late John Hart, the old bard of English acting, and Sean Bean, and Octavia Spencer… The main thing when you’re working with someone is that you be kind, positive and pleasant to work with.

Do you ever turn down roles?

– As a young actor, I’ve experienced the best and worst things in theater, as well as on film. I’ve acted in shows where I’d get my lines the night before, or just before starting to film a scene. Today I know exactly what I want and why I do this job. I pick my roles carefully. For example, I turned down three soap operas in Croatia where I was offered the lead role, because acting for me isn’t about making money, or about popularity. That’s a banal approach. I see myself more like the English actor Daniel Day-Lewis. Quality has to be at the forefront at the cost of having a slower progression in my career, but that type of approach to work fulfills me.

Why did you decide to invest in a Bosnian cuisine restaurant?

–  I travel a lot and when I return to Sarajevo I become aware of what we’re missing in our cuisine. There’s no country that I’ve been to that doesn’t have the cuisine of that country in the very center of town. I wanted to invest in something Bosnian, work on raising national awareness, give back the soul to our tradition. It’d be ideal if there had been a Bosnian corner with local establishments and motifs in SCC from the very beginning. The point is to brand ourselves and communicate it in a number of languages. I used the motif of a rose, which was always a symbol of dignity, beauty and elegance for the restaurant, which is designed like scenography for a show. When they come, tourists want to see what’s traditional, and it’s an ideal combination when they also have the opportunity to feel the taste of local food as if they were guests at your grandma’s house.

Which country’s culture left the biggest impression on you on your travels?

–  Italian culture is very close to me. I love Italians because they’re like us – passionate and hearty people. I also like London as a city. Of course, the Orient is magical. I’m particularly fascinated by Persian culture. I haven’t visited Iran yet, but I have a great wish to do so. I’m fascinated by their spiritual and cultural heritage. I want to experience it.