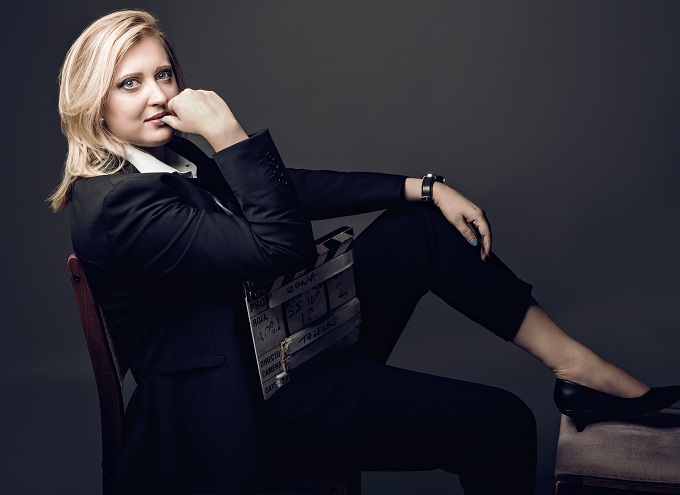 While still a student of literature of BH. peoples and Bosnian language, Anila Gajević (36) opted for journalism, in which she stayed until founding Casting and talent agency Zona. She thus never worked as a professor, but she left a mark after several years dedicated to studying literature with her book of poetry, The Ex, which she published in 2004.

Working as a culture editor and at the same time writing film and theatre reviews, Anila Gajević had the opportunity to meet almost the entire acting scene of the region. The idea of founding an agency which would gather actors and represent them in foreign markets came about accidentally, whilst having one of many sit togethers at National Theatre bar, when she realised that actors would be delighted if given the opportunity to have foreign projects available to them too. That’s when the story of making a Casting and talent agency Zona began, the first of its kind in BiH, which now represents actors not only from our country, but from Croatia, Serbia, Montenegro, Macedonia, Romania, since recently Turkey as well, and Kosovo too.

What was it like to start building a business system which did not have a tradition in BiH?

–  It was ver interesting, as I am curious by nature and I love to learn. First I got to know the work and researched the market. My first important contact was with the casting director Nancy Bishop. She worked on a NBC’s show Philanthropist, which was being shot in Prague. She needed actors from Kosovo. After getting in touch with her, she was interested to look at the offered portfolios, and that’s when Macedonian actor Visar Vishka and bh. actress Nikolina Jelisavac got parts. It was our first large international project. I started building this business from zero, and today, Zona is a fact on international and European movie markets.

Where do our actors have better chances to prosper?

–  In large markets, absolutely. Today borders do not exist. We live in a global village, in an Internet era, where anything is possible. It doesn’t matter where the actor lives. He can live in the remotest village, but with Internet connection he can be available to everybody. To actors who are members of  Zona the whole world is a market. We videotape actors here and send materials to castings from  London, Prague and Los Angeles to Canada. BiH is a small country, small market. One movie gets made per year, or none. It is very hard for actors to gain experience on film, and most actors, apart from theatre, daydream about the film.

What would be your advice to young actors?

–  I think that young actors should not have big expectations, which is hard in that line of work. I often tell actors that once they shoot the casting, they should forget that they’d done it, that they should not wait for the results. This is hard, because this is such a specific profession which is very public and actors who enroll at the drama school, do so because they are talented and because they have expectations from that job. I would like for them to understand that the road to success is difficult. They need to be persistent, ambitious, not to the extent of burning out, but they need to be willing to learn and to constantly go to castings. That way the are allowing the world a chance to see them. We never know who might see the casting and then eventually remember the actor in it. You do not pass on the opportunities, even if it is not so good now – in future it may turn out to be good.

Who would you single out as special talents?

–  Every day we discover new people, new talents, not just because they get in touch with us, but through certain projects. I regularly go to Academy of Performing arts and I watch the exams. Actors Dino Sarija and Maja Jurić, for example, fluently speak English and German languages. I also find interesting Saša Krmpotić, also from Sarajevo, and Kruno Bakota from Zagreb, who lived in the US for a long time and speaks English without the accent. We work a lot with Slavko Sobin, a relatively young actor also from Croatia. There are many talented actors, but also the ones who are in their ‘thirties. Out of the Turkish actors that we collaborate with, some are already famous, such as Nesrin Cavadzade. As for the BH. ones, there are Amila Terzimehić, Igor Skvarica, Edin Avdagić, Muhamed Hadžović…

What type of roles do you negotiate most often?

–  We are basically famous as agency from Southeastern Europe, so more or less we get contacted by casting directors and producers if they need parts of that type, nationalities from this region, with roles that come from Russian-speaking areas or any other non-English area. Sometimes they have an interesting part and want to see talented actors from all over the world. Since Reshad Strik, Australian actor with bh. origins, is a member of our agency, we are trying to raise the profile of Zona towards an agency which represents actors whose mother tongue is English.

What would you single out as your biggest achievement?

–  The continuous growth of the agency. We are constantly expanding the client base, but also the productions that we collaborate with. I am proud of the projects that we worked on, i.e. our actors worked on. Some of them are Mission Impossible, The November Man, Twice Born, Child 44, In Order of Disappearance, Skyfall… We work a lot on TV series made by big networks, big studios, like, for example, NBC, ABC, BBC or FOX. A recent Screen International award, which included me as one of  leading world agents, is actually a crown of my work thus far and the proof that I am on the right way.

How much is visiting Sarajevo Film Festival important to you, business wise?

–  We have a great collaboration with Sarajevo Film Festival and consider it our partner to some extent. In the past five years – and we shall do so this year too – we organised Zona’s party at the festival, and usually this turns out to be one of the most visited events at the festival. Festival is an important place for our work, our actors, getting together of all film workers.

What do you expect from future?

–  Professionally, further growth of the agency and hiring more agents who would represent particular actors.

–  I go to a set when I find something interesting there. I was at the Mission Impossible shooting and met, among others, Tom Cruise. He is a lovely, kind and humble man. All big stars that I met while interviewing them, or now through this job, are very modest. Recently I’ve also been delighted by a German actor, a rising star, Tom Wlaschih, by his modesty, decency and cultured behaviour. This is what I’m traying to pass on to our young actors, that modesty is an important virtue of all artists.