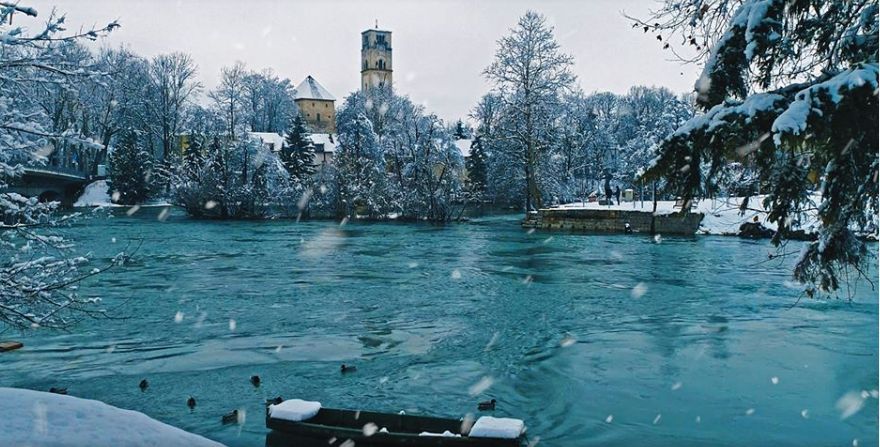 Bihać – The Gentleman on the Una River

Some say that if you begin the new year by dancing and wearing something red, happiness will be guaranteed for all 365 days. Maybe that is not true, but dancing and red color are always a good idea.

That was the Una River. Father was laughing, thinking that I was frightened so he held me and told me not to be scared, that the bridge was solid, but I was not afraid: I was flying, illuminated by this Una River, this invisible miracle, for which I could only say, beauty, beauty, not enough eyes to see, not enough lungs to breathe. This is how writer Skender Kulenović described the Una River. And it is indeed beauty, beauty.

Maybe we would not know what Skender meant if we had not seen with our own eyes the waterfalls and cascades and smelled the emerald droplets dispersed over the rocks with which the river fights an endless fight without a winner. Neither the Una nor the rock surrendered. The river cannot break the rock, the rock cannot stop the river.

On its 212 km long course, the Una river has enriched every stone and every town, all the way to the Sava river into which it flows as its the purest tributary.

Did you know that Bihać, the Gentleman on the Una River, is one of the most visited towns in our country? And it’s not by accident.

Bihać was previously attractive to tourists mostly during the summer. Numerous festivals, concerts, and events, and the renowned adrenaline Una regatta, attracted numerous guests. Tourism professionals thought this was not enough, so they decided to “shake up” the town.

Numerous cultural projects were initiated, interesting events at the Sokolac fort, touristic boards and instructions were set up, and the town was spruced up, as the Gentleman should be.

Bihaćko ljeto (Bihać Summer Festival) is getting bigger and bigger, mini-festival ‘Bihać Summer Gigs’ is an excellent story of promoting Bihać throughout the summer through gigs of local bands. Indeed, Bihać is the most interesting town to visit in Bosnia and Herzegovina during the summer, and the Tourism Office of Bihać sponsors the event “Jesen na Gelenderima” (The autumn in Gelenderi park) to expand the tourist season to the entire year.

In the medieval town of Sokolac, a staircase is being built, wooden windows are installed and oak entrance doors, creating the possibility of organizing different events. The project of merging two towns, the existing and the medieval one – Bihać and Sokolac, was implemented, so you can walk from one town to another by a pathway. It is so lovely, you have got to see it.

By demolishing a dilapidated Fire Station building, the project of creating a mini city beach began within reach of the city center. How many towns in our country can brag about this?

It’s how it is in the spring and summer.

The white winter of Bihać is another story. Although the preparations begin in the autumn.

The Bihać winter story becomes the center of Krajina every December. Numerous sports events, theater plays, and concerts produce magical moments. During the holidays, the town is visited by people of Bihać who live all around the world, so there are many hugs and kisses, and tears of joy.

This, now traditional, story offers an abundance of events for everyone, so the Days of December in Bihać are a place of meeting, gathering of friends and family, and sharing joy and fun.

Bihać Winter Story or Winter Park will be held for the 6th time this year and has already become a beautiful and important tradition, because everything tells us that this year will surpass all previous ones.

The creative energy of the organizer, warm ambience, culture, entertainment and sport, as well as tempting smells from the kitchen this region is known for, attract an increasing amount of events to the City on the Una River and make Bihać a perfect destination for New Year’s Eve. And if the snow falls, the fairytale will be complete. The creaking sound of boots walking on snow is always a lovely sound.

There will be everything when the magic of December begins. Theater plays Pedagogija otpora Branka Ćopića, Sajber skuština, and Ne brinite o nama, will be performed at the Culture Centre. Pop and rock concerts, tambourine players’ shows and choirs will warm our hearts almost every night. On the penultimate days of the old year, children’s New Year will be celebrated with BelCanto choir, and Bihaćka petica race will be also held this year. To mention only a few.

Everyone agrees on the goal – ensure an unforgettable December and New Year’s Eve in Bihać. Tourism Office of Bihać says that we are welcome. They only require a smile and good will as a ticket to enjoy the holiday atmosphere in Bihać.

The 6th Winter Park festival will take place at the Town Square in Bihać. Amazing Tijana Dapčević will be singing to the citizens of Bihać for New Year’s Eve of 2023. Some say that if you begin the new year by dancing and wearing something red, happiness will be guaranteed for all 365 days. Maybe that is not true, but dancing and red color are always a good idea.