Danka Savić, the Ambassador of BiH in the Kingdom of Spain: In a Country of Impressive Contrasts

Before her diplomatic career, Danka Savić spent almost 20 years in journalism, which is a chapter she closed as a multi-award-winning journalist. Afterwards, this graduate of European Studies was employed in the Ministry of Foreign Affairs of BiH. After spending time in the Czech Republic and Slovakia, she was appointed BiH ambassador in the Kingdom of Spain, where she became an honorary member of the Diplomatic Academy of the Kingdom of Spain this summer.

Long before she started working in diplomacy, Danka Savić kept up with the topic of foreign policy as a journalist and traveled a lot. She only realized how much experience she gained as a journalist for almost 20 years when she became an ambassador in the Czech Republic and the Slovak Republic in 2013.

“While my appointment as ambassador may have seemed like a surprise, I felt it followed the natural course of things. After starting to work as a diplomat, in addition to cultural and other promotions of BiH, I worked on topics very important to me as a journalist, primarily the Euro-Atlantic integration of BiH. I even went back to the places I reported from. For example, I used to come as the only person from BiH to Bratislava for years when the security forum of Globsec was held, and after I was appointed in the Czech Republic, I became a nonresident ambassador in the Slovak Republic, so during my time in office in these countries, I still continued to attend this security forum, the second most important one in Europe. Journalism has helped me do my diplomatic work more successfully and professionally “, says Danka, who became an ambassador in the Kingdom of Spain in 2019. 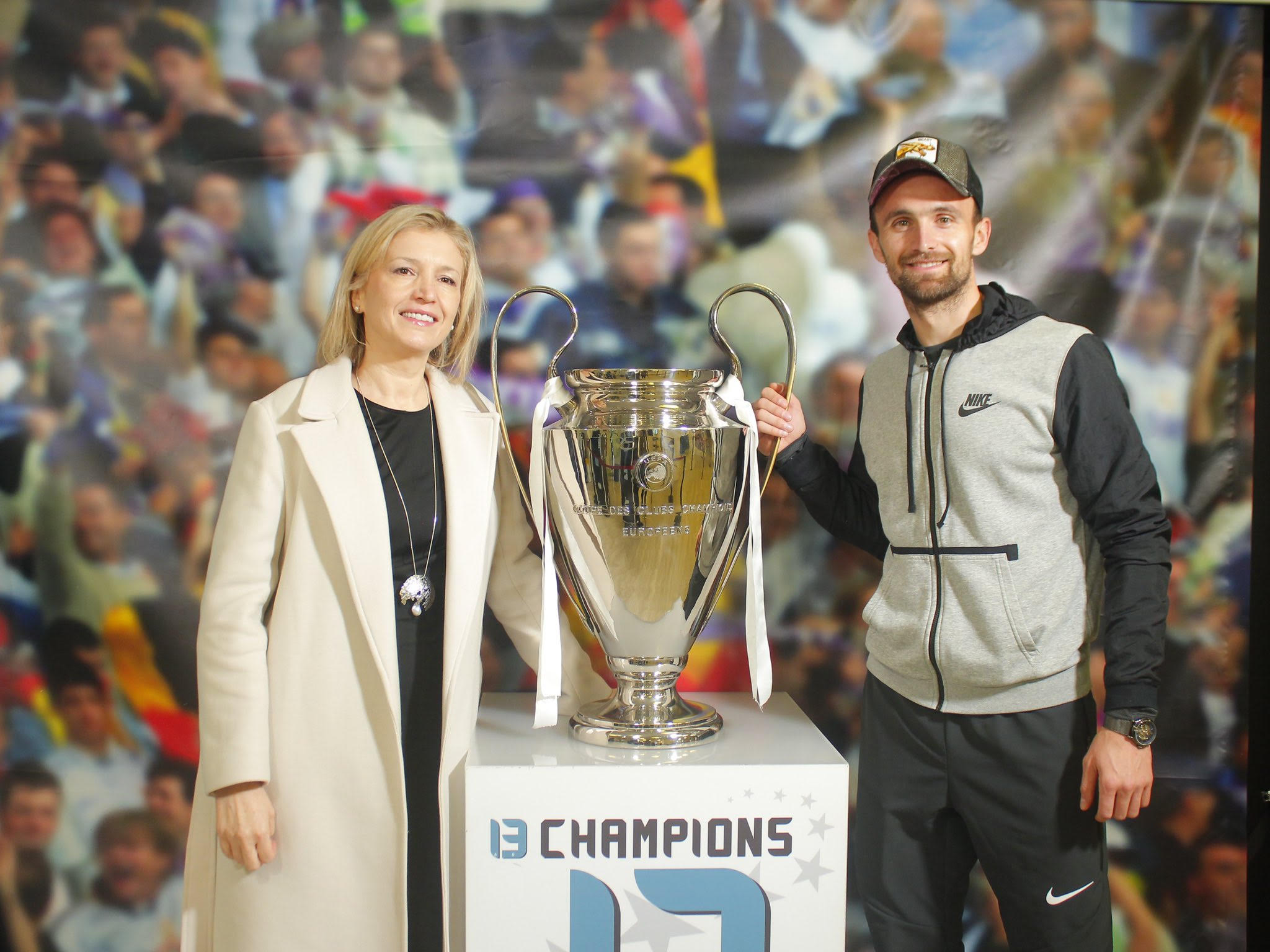 Which goals did you set to accomplish when you started working as ambassador and how close have you come to achieving them?

–  There is almost no profession that looks as attractive and prestigious to many who don’t work in the field as diplomacy does. However, hard work is involved beyond everything else, and it takes time to see results. In addition to your own efforts, you need other circumstances to help you. The main task of each ambassador is to better represent his or her country in the institutions of the country he or she is going to work in, to work on strengthening bilateral cooperation in all areas possible, but each country has its own specifics which determine your priorities. In Spain, I was very engaged in the process of having BiH become a member of the Olive Council, which I find extremely useful for my country. I did everything in my power to make this happen. Once the steps have been taken, our institutions need to do their part of the job. My initiative has received support, but the procedures leading to membership need to be completed. I hope that will happen while I am in Madrid. Furthermore, it is extremely important for me to reach an agreement regarding the recognition of driver’s licenses, which BiH has been trying to obtain for a long time. Upon my arrival in Madrid, I renewed the negotiations; we drafted a new agreement and the text is being adjusted. We are waiting for this work to be completed and technical preparations to be made for its implementation. These are just two examples that demonstrate how everything is achieved very slowly in this field and how it does not depend only on the diplomat who initiates such things. Promoting BiH culture is also one of my priorities. I am satisfied with what I have achieved so far, especially when we consider the circumstances in which I have worked for the past two years. I would like to emphasize the exhibition of the Sarajevo Haggadah facsimiles, which received huge publicity in the local media, the British Guardian, and a recently opened exhibition in Andalusia by BiH photographers as well as an online exhibition by sculptor Adis Fejzić. 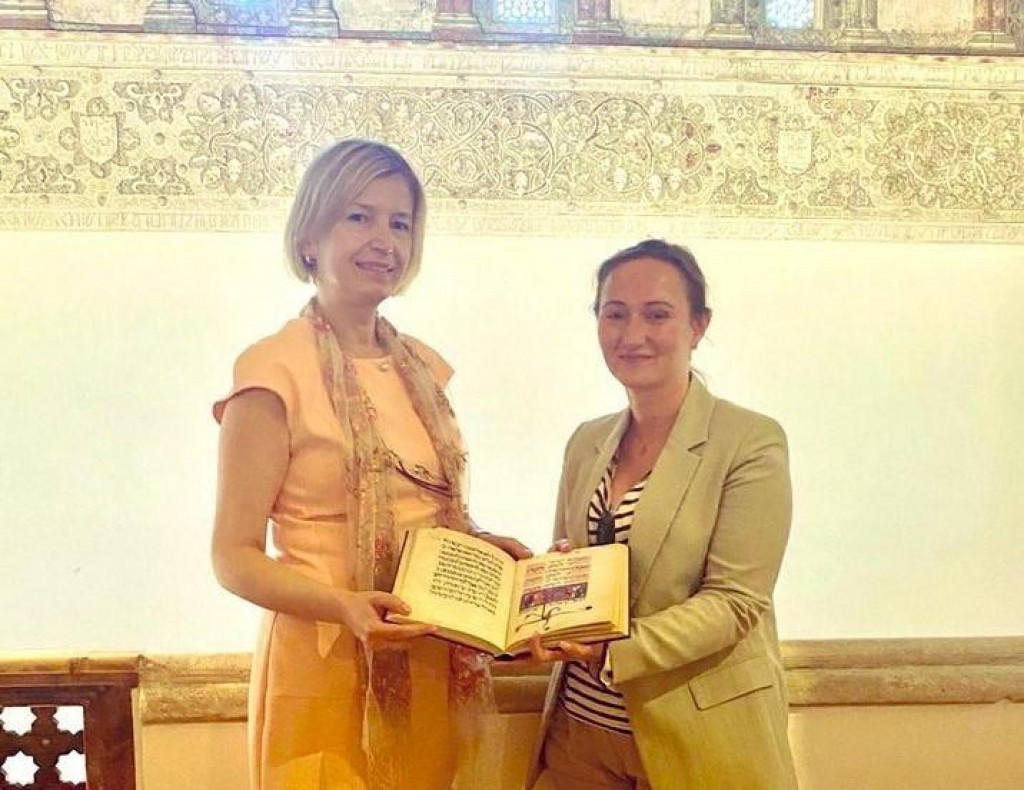 What impressed you most during your time as ambassador?

– This country is really impressive in itself. The mixture of Christian, Arab, and Jewish cultures make Spain indescribably beautiful and interesting. I consider the progress made in the last few decades a huge achievement; it fascinates me. Since the beginning of its democratization in the late seventies and its entry into the EU in 1986, Spain has been completely reborn and modernized in every way. Its example is instructive and inspiring for countries going through that transition.

What projects do BiH and Spain best collaborate on?

– Spain is very proud of its role in peacekeeping missions in BiH; around 46000 Spanish soldiers have participated in them for almost 20 years. It also participated in the post-war reconstruction of BiH. It made significant contributions to the reconstruction of Sarajevo City Hall, the Cathedral of the Holy Trinity in Mostar, and the construction of the Spanish Square also located in Mostar. Spain also assists BiH on a multilateral basis through the institutions of the European Union among other things. We have strong connections; Sarajevo is a sister city to Barcelona and Madrid. Recently, we had an announcement about a joint candidacy for the 2030 Olympic Games of Barcelona and Sarajevo as well as for the reconstruction of the bobsled track on Trebević needed for the event. Next year will mark the 30th anniversary of the establishment of our bilateral relations.

How much do you cooperate regarding tourism?

– Every year, at the FITUR tourism fair, one of the largest of its kind in Europe, we have representatives from BiH. We had several conversations and plans for tourist promotions, but due to the pandemic, we were unable to do anything more in the past two years. We are working on the promotion of publications about the tourist potential of BiH, and we are looking for a way to translate a part of it into Spanish. Tourism is an area which we want to really improve on. Madrid is also the headquarters of the World Tourism Organization (UNWTO), which BiH is a member of. In addition to all of that, Spain is of interest for another reason: this country is practically Europe’s entrance for everyone who comes from Latin America, which is a large but undiscovered market for us. Until the pandemic, a significant number of Spanish believers visited Međugorje, and the first group of Spaniards to visit BiH a few months ago was a group of believers, who arrived in Mostar on a charter flight with the intention of visiting Međugorje. Recently, we have been recording a large number of calls from Spaniards, who are seeking out information about our country because they have a desire to learn more about BiH. As of this year, we have the Honorary Consulate of BiH for the Spanish regions of Andalusia, Valencia, and Murcia in the city of Alicante, and we have initiated the establishment of an airline to connect our countries and establish the best possible conditions for tourism cooperation. 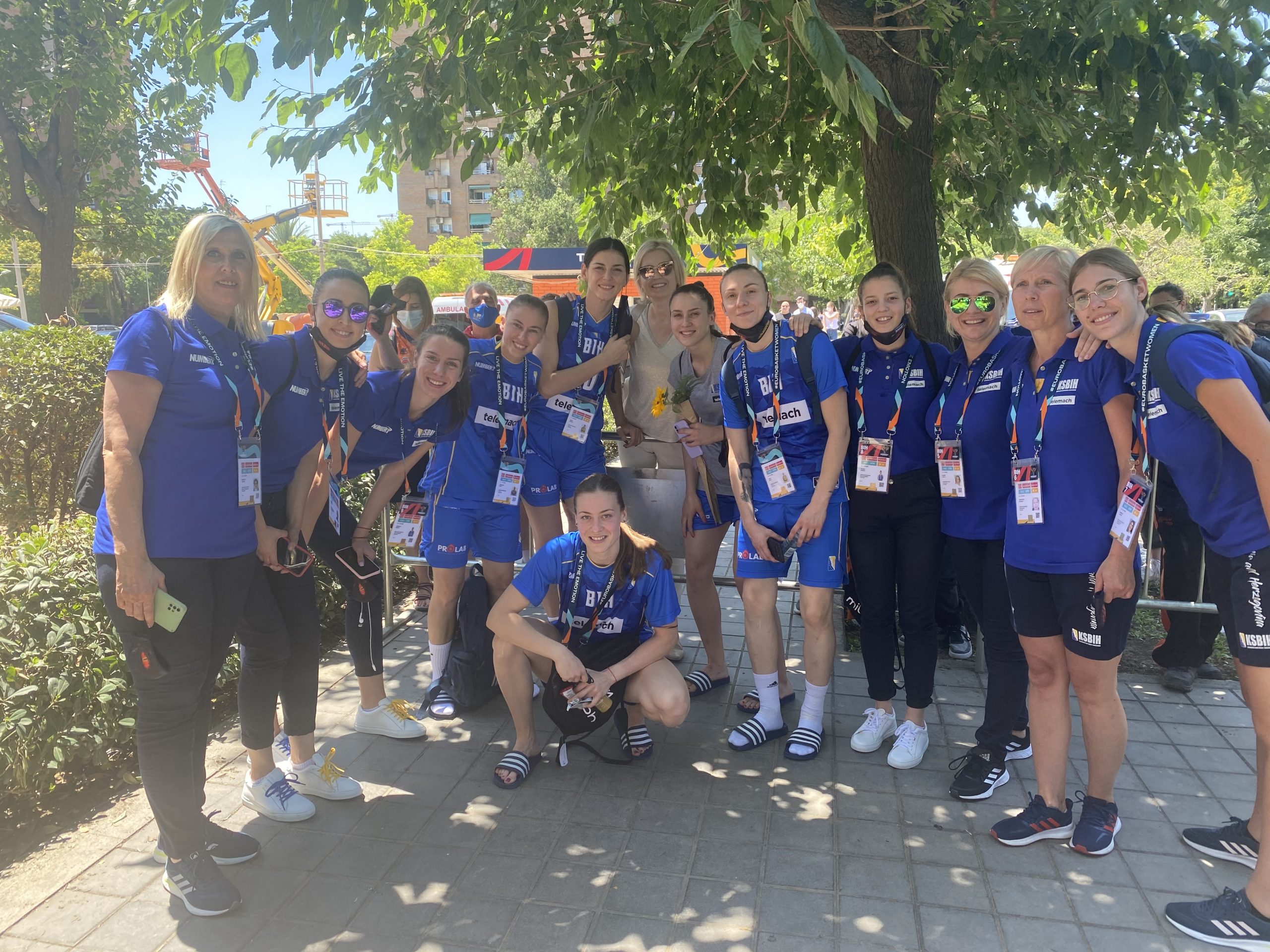 The Covid-19 pandemic has changed our world picture. What does life in Spain look like today?

– In recent months, incomparably better; I would say that life is slowly starting to look like the pandemic is behind us. Spain has gone through a complete lockdown and is among the top list of countries in terms of the number of vaccinated citizens; more than 80% of the population is fully vaccinated. Although it is a nation known for how much it loves life, going out, gathering in restaurants, and socializing, it is to be commended that its citizens showed a high level of discipline and responsibility during the pandemic. This was one of the most affected countries, but the introduced epidemiological measures were respected. Even today, when the situation is incomparably better, a significant number of people on the street wear a mask and respect social distancing.

How many BiH citizens live in Spain?

– In addition to the constant need to work on changing the image of our country, it is of great importance for our diplomats to gather and connect our people around the world. BiH expats represent a huge potential for BiH, and we need to do everything to develop and maintain strong ties with our people, including in countries where their numbers are not large. There is a very small community of our people in Spain, and my efforts are to make all of our citizens feel welcome in the embassy. Immediately upon arrival, I organized a reception for our citizens, and I use every opportunity to be in contact with them. Of the approximately 3500 Bosnians and Herzegovinians who came to Spain at the start of the war in BiH, most have Spanish citizenship today. According to the statistics of the Kingdom of Spain, about 1200 of our citizens live here, but, unfortunately, there is no association that connects them.

What in Spain reminds you of our country?

– People here are cordial, open, and friendly like in our country. As a stranger you feel comfortable. I think that such hospitality is present in our country.

And what do you miss the most?

– My loved ones and friends, of course, although time passes by so quickly that I find it hard to believe that I have been here for two years. 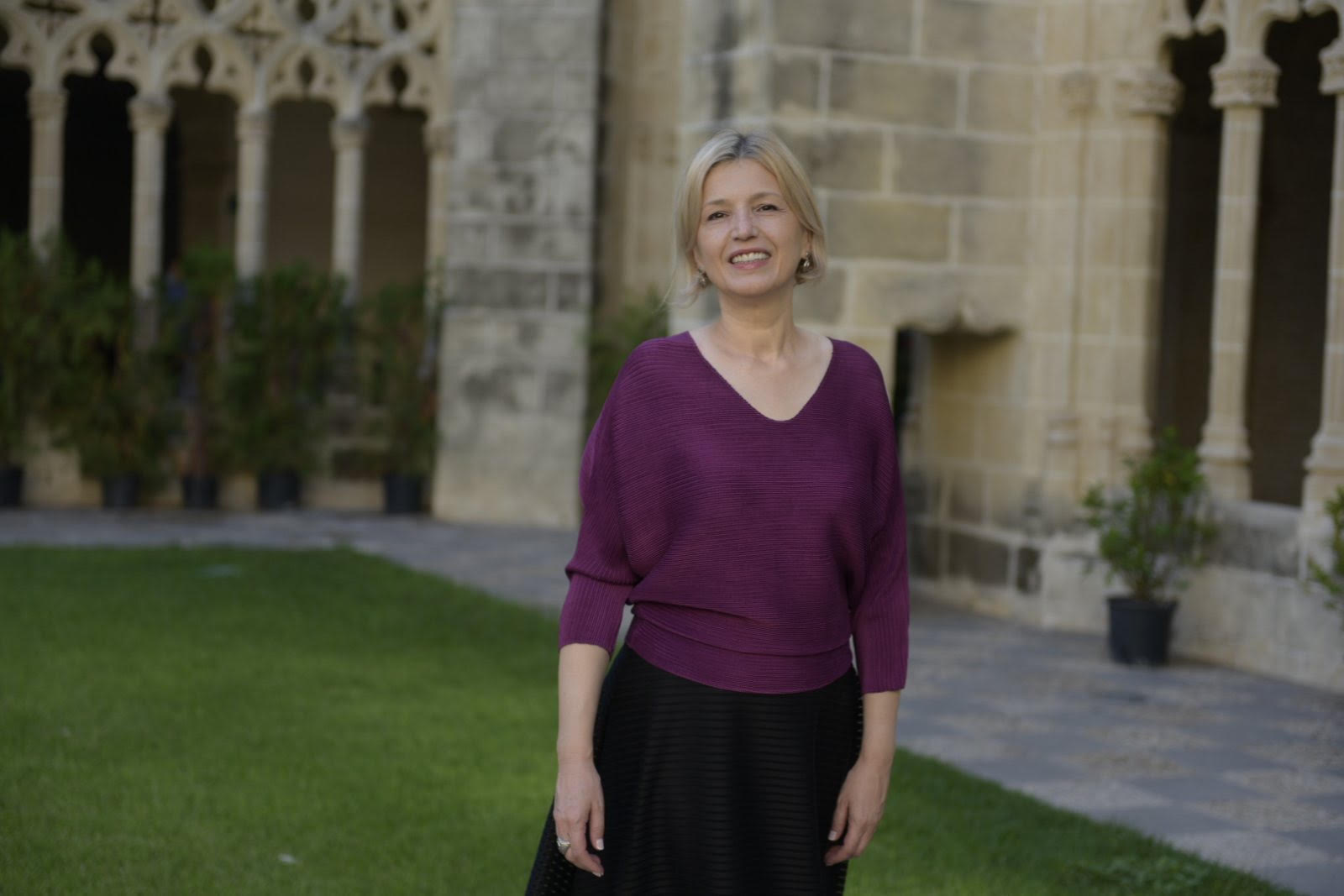 What is your favorite corner currently?

What profession did you daydream about as a girl?

– About archeology. The first book I read as a little girl dealt with Egyptian pharaohs, and discovering ancient worlds and cultures has been appealing to me for as long as I can remember. Just like traveling.

What do you think the highlight of your career is?

– It was a great honor for me to become an honorary member at a solemn ceremony in Madrid held at the beginning of July this year on the occasion of the 25th anniversary of the founding of the Diplomatic Academy of the Kingdom of Spain.

What is your greatest wish?

– To be surrounded by people I love and to do things that I find useful and valuable.