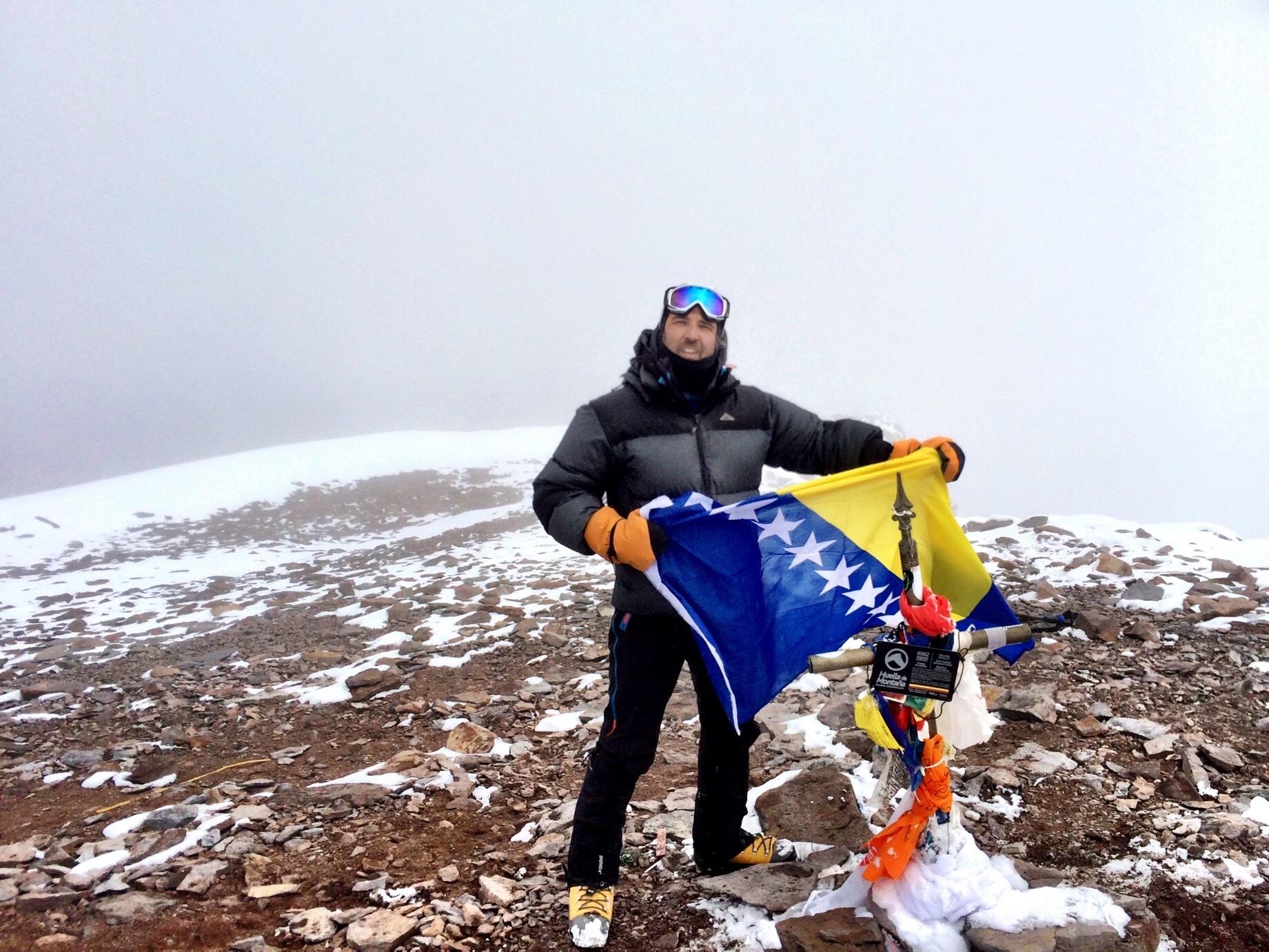 Wherever he had gone, he was welcomed with the great hospitality of the hosts. He believes that one of the reasons for that is the fact that people recognize alpinists as persons with good intentions and open heart

Even if you know nothing about him, during your first meeting, you will easily realize that Tomislav Cvitanusic is a passionate sportsman. His facebook photos, on which he runs at 5a.m, can additionally confirm that. Thanks to him and his colleagues, another Sarajevo Half Marathon, with over 1300 runners from 36 countries, was successfully held. Besides running, it was dedicated to alpinism, bicycling and swimming.

He devoted himself to individual sports after his basketball career, during which he had played for the first team of BC Bosnia in the late 80s, playing at that time with Mirza Delibasic and Ibrahim Krehic. He came for the interview filled with positive energy and frankness. He is basic example of a person in whose healthy body lives healthy spirit.

‘I wanted to stay healthy and fit because if you are not, you don’t have energy and thus you will hardly accomplish other things’, says Tomislav at the beginning of the interview.

You are engaged in various disciplines. What does it mean for you to be at the source of adrenaline?

I am physically very active every day for at least hour or two. I do programs which depend on what I practice for, that is for what type of a contest. When I practiced for IronmanTriathlon, I had 15- 18 hours training a week, including swimming, cycling and running.

How important is ranking after training so hard?

Triathlon and marathon competitions are enormous where even 40000 people participate. In the marathon in New York, where I ran in 2008, was precisely that number of people. In Ironman, Klagenfurt in 1012. were 2400 competitors. We, who do this discipline, first compete with ourselves. You always have professionals who live from that solely; they win first places and get large money prizes. I am not a professional; I see it as a challenge to beat myself because, you are your self’s biggest opponent.

Can it be said that the greatest part of you is an alpinist?

I was “infected” with it by Muhamed Gafic, doyen of BH alpinism. Basically, many people don’t know that alpinism and mountaineering are different. In mountaineering, people go to mountains for big height, whereas in alpinism, height is not decisive, you use tools, ropes, wedges, techniques….I love height but I love climbing on Romanija or Visocica as well. For me, it is a combined.

Which mountain peak was a starting point?

When I show pictures from Bosnia to foreigners, video promotion of tourism and natural beauties which was broadcasted on CNN, they remain speechless. So, what is the problem? Why don’t we manage to bring people to enjoy here? To spend money and feel good? The responsibility lies in the tourist organization. What we have here, many don’t!

The highest mountain peak you reached was Aconcagua. How did you practice?

All my life. Climbing on 7000- meter altitude doesn’t mean that you are only physically prepared. You have to be mentally prepared likewise to resist the temptation. At 6000-metre altitude, you have only 40% of oxygen obtainable. You carry 25-30 kilogram bag loaded with essentials, a tent, you spend nights at -25 degrees, and you keep everything in a bag so that it doesn’t freeze… Your mental strength is shown in such circumstances. You can gain physical training but it takes more time for acquiring mental. Our expedition had four members, three from BH while the fourth, our guide, was from Argentina Emanuel Bocha. You mustn’t climb Aconcagua without a guide and the Government permission to enter the National Park. And of course, you have to respect the rules. In case you leave garbage on a wrong place or you do anything that is not in accordance with the law, your license is taken away, you pay 500 dollar fine and you will be expelled from the National Park without any chances of ever coming back. Climbing itself, from entrance in the National Park, leaving civilization to reaching the summit took 17 days.

What was the hardest temptation?

You always think of those who you have left behind in the valley, lack of communication, no Internet, you cannot call anyone…. Height consumes you energy and you don’t have appetite. We lost nine kilograms on average.

What did you usually eat?

We would always take gas stove so that we could prepare something warm. Food we carried wasn’t heavy because you take that into account, too. We consumed light food but you lose appetite up there. A man looses need for drink and food but you have to take food to renew the energy and to be able to continue. It is a huge, mental temptation. Many teams fell apart, returned half a way, and didn’t agree. We were ready, armed with knowledge and desire to complete the action and our flag flaunted on the Aconcagua peak.

How did you endure low, night temperatures?

The base camp was at 6100- metre altitude. There are neither animals nor any signs of life. Condors fly no more than 5000-metre. It’s hard to sleep, you sleep for several minutes, then you wake up because you don’t have oxygen, you fall asleep again and do it till dawn. Wind rages and if it blows away your tent, your chances for survival are minimal.

When we reached the summit, we had to come back because the storm was coming. Soon after us, Polish expedition arrived in which was Marek Radisevski, with whom we befriended at the camp. After we had praised him because he managed to reach the summit, he only nodded and lost his consciousness. We tried to give him first aid, but Marek died. It is a difficult moment when you have to leave an alpinist friend because you cannot carry him down. We covered his body with foil and placed rocks around. The unpleasant event happened on Wednesday and the rescue teams of the Argentina Military Forces managed to reach the summit only on Sunday to bring down his body in the valley to be buried. It is the reality and a man is always ready for it.

What will be your next venture?

My partner Ismir Jusko and I dream of Himalayas, a peak above 8000- metre where BH flag will flaunt. Everything we have dreamed of until now, we achieved. I like to say that if our ancestors hadn’t gone out from the cave and if they hadn’t seen what was over the mountain in the next valley, we wouldn’t be where we are now.

How would you grade people’s hospitality in various parts of the World where you stayed?

In southeast Turkey, I stayed in a region where PKK involved in clashes with the Government forces. We stayed in the region where the majority of population were Turkish people, then we stayed in the city below Ararat where Kurds live. Both groups of people were incredible and very hospitable. There were no differences among the people we came across on our journeys in the North America, southeast Turkey, Austria, Italy, France…. Perhaps we came among people who knew that we alpinists are people with good intentions, open heart and they simply accepted enthusiastically such guests. They questioned us very curiously about the country we came from.

How do you generally prefer to travel?