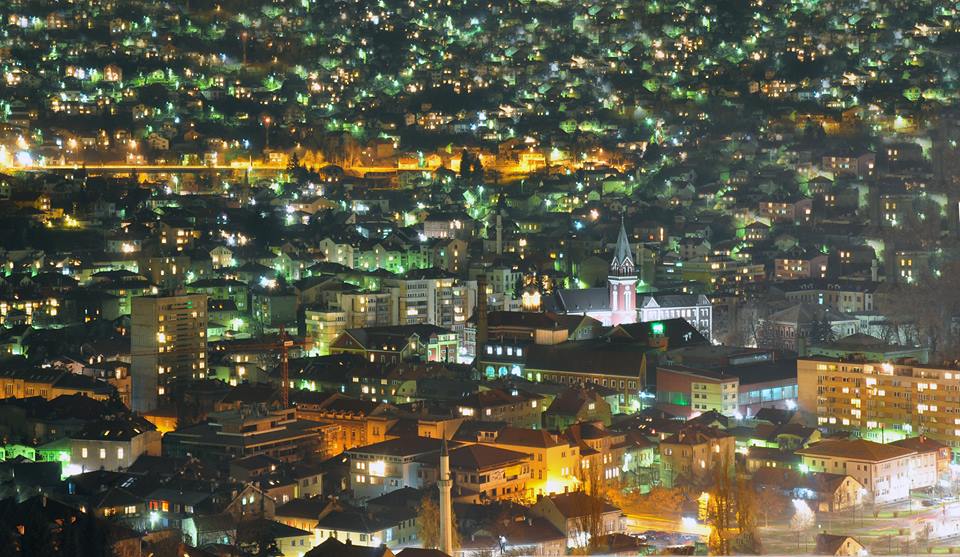 A view from a musty side

See if you can tell only one tale about Sarajevo. Just as you think you’re done, you start writing another, subconsciously or consciously, like in „1001 Nights“

A tale of musty and sunny sides stands there immovably for as long as Sarajevo exists. Two sides, two riverbanks of Miljacka, two neighbourhoods, Bistrik and Vratnik, Dino and Hari, two views and one tale. When God gave Miljacka a task to penetrate a canyon and come out into the field around the court, a poor fog couldn’t even imagine what theories and philosophies would be developed and elaborated on its riverbanks’ steeps.

Although I am, by my elementary education, a „building block boy“ from Grbavica, deep within me one can feel a whiff of growing up in mahala* on the musty side, or as one haji from neighbourhood Širokača calls it, a mubarak side. That’s the one up there on the left riverbank, where the snow dwells for longer, and the Sun appears less often. The legend says that young men from this side did not get recruited to the Turkish army because of the dampness and must in which they grew up. But these boys knew how to dream their dreams beneath Trebević, at Čola’s cap, Eights, Vranjače, Zlatište… Many of them still dream in Kovači and from time to time look across the river, to check whether each stone in Hrid and benath Bostarići still stands the way they left it. And they wait like white birds to ease our departure from this valley.

The city itself came upon on the left bank, around Emperor’s mosque, and one can feel it. The bey planned for it to be his, but it was destined to be Emperor’s. Officially, because of the number of steps on the minaret, human envy and vicious tongue. But it is only when you step inside it that it becomes clear why it was Emperor’s. Old Sarajevans distributed charity starting from Seven brothers, via Franciscan church of St. Anthony, then across Miljacka into the Old orthodox church. Younger ones are only accustomed to domed burial site of Seven brothers, and believe that they shouldn’t go back the same way they came, and that the first thing they hear will come true. The first word I heard before my anatomy exam I cannot even repeat. And I passed the exam. I was always fonder of the late afternoon or dusk time ritual walks through mahala’s, from Takiša and Megara to Toplik, and further towards Kozija ćuprija. At that time of the day, the eyes behind the curtains would tire from the day-long observing, and the stray dogs would settle down and stop barking at the passers by. They’d await a new day.

In time, many things came about – brewery, cable car and music pavilion in At Mejdan. As time went on, the barbers of Skaka circumcised more than million people. And noone can count the number of  evenings at Biban’s in Nišan, or siestas at Popov gaj. And only the ones who never climbed to the peak of Trebević past the Prvi šumar could wish to waste their energy senselessly at some hills far, far away. Sarajevan hikers know what it’s like to climb down Pogledine and talk to the City Hall – eyes to eyes.

And in one of Medina talks, Midhat-effendi said, as a response to my remark that I’ve never been to the mosque in Vratnik: “You’ve never been to Sarajevo”. He invited me to come, and I went and realised that he was right, that one cannot do without the other. And nowadays, almost as a habit at Ramadan time, after ikindija prayer, down the Čeljigovići, past the City Hall, to Jajce barracks and White mosque. And I look from the sunny to the musty side and just for a moment I go to some other world. But, that view starts a new tale.