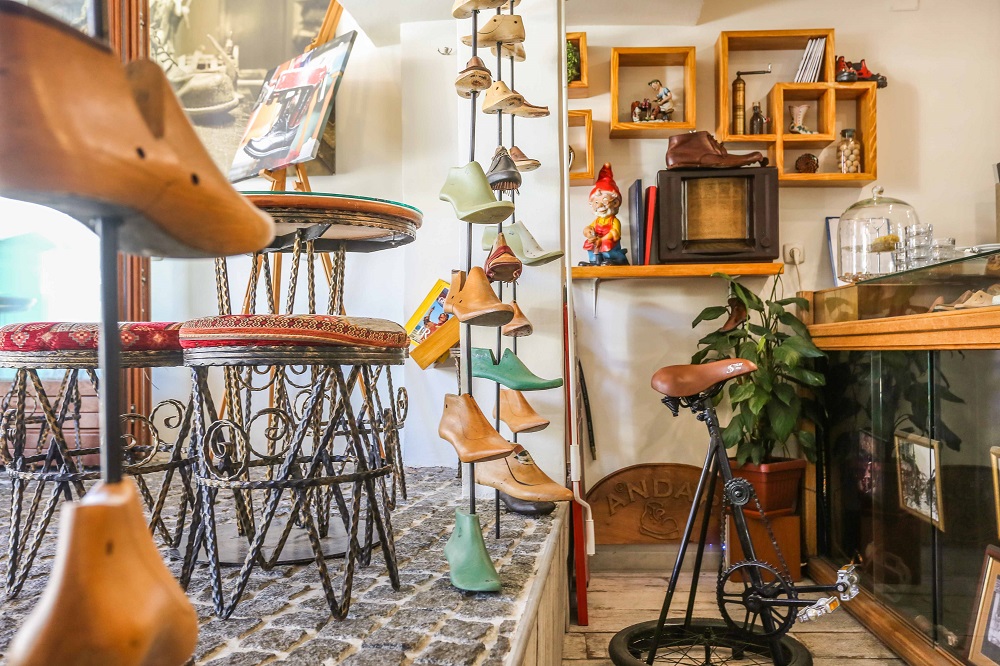 Andar – A café where shoes are celebrated

From a shoemaker’s shop to a popular café at Baščaršija.

In Sarači Street, at Baščaršija, a different kind of café began its story two years ago. Different because of its past, where the „soles“ of women’s favorite sport used to live – shoes. Namely, this used to be a shoemaker’s shop that was opened in 1933 by Muharem Dizdarević. Together with his employee Smajo, he began to make bespoke shoes, but, when he became ill, his son Osman took over the business. Despite his youth, he took to the craft, diligently learned about it and with time showed what an exceptional talent for designing shoes was hiding within him. They were in demand for a long time, and they still are even today, when the shoemaker’s shop no longer exists, as customers still enquire about some of them.

As the times are not favorable for traditional crafts, after Osman’s retirement, his daughter Maida Ablaković found it hard to resist the pressures of the modern age. Realizing that the moment had come when she would change the purpose of the shop that she had inherited from her father, she decided to make a café that would resemble an old Bosnian house. However, when everything was laid out and she saw the empty walls, she thought that her heart would break from sadness, so she returned some of the things from the old shop, mostly as a memory for herself. In the end, she got a place which still celebrates shoes and her family heritage.

After the redesign, furniture that fits in with the spirit of the old čaršija (bazaar) was selected. On the ceilings, like long chandeliers, decorations with shoe molds in different colors were set up, as well as parts of boots with tied up laces. Accessories from the shoemaker’s shop where her grandfather, father and Maida had worked fit in perfectly into this completely new story.

That is how café Andar came to be; its name came from the word radnja (shop), as the Dizdarevićs always called their shop. When read backwards, without the letter “j”, it sounded good, so there was no dilemma about whether it should stay. However, a sweet and very symbolic thing happened when Maida heard from one of her customers that the word also has its meaning in Spanish. None other than – to walk.

Andar is especially loved by foreign guests of the city. Probably because it is a unique experience to sit in the busiest street of the cultural and historical center of the city, feeling the beauty of the atmosphere of the old bazaar. And if you decide to come, you must try the dibek (hand-ground) coffee along with some of the traditional desserts – kadaif, divit baklava or ružica.