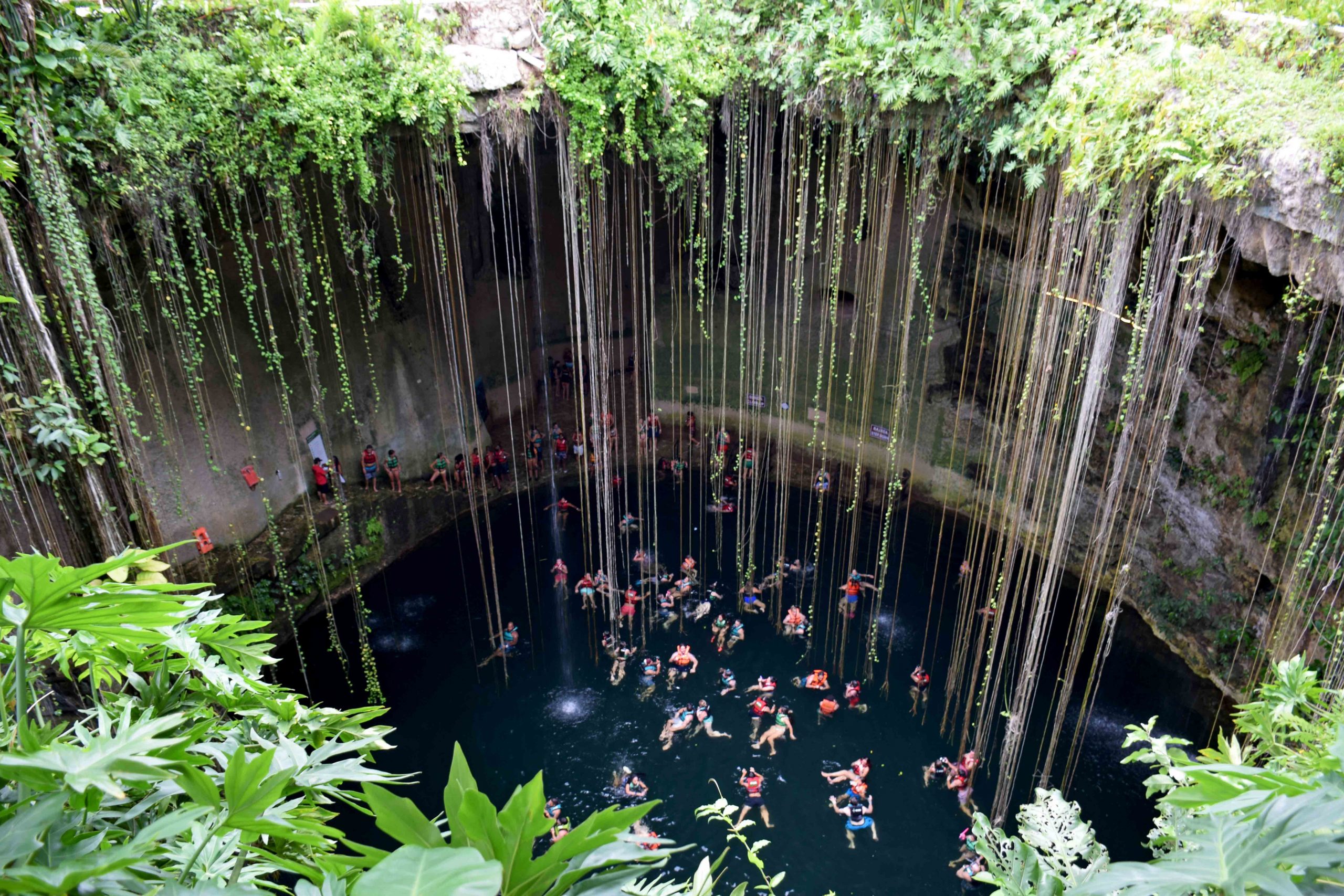 In the second half of the 20th century, a large meteorite that fell on Earth approximately 66 million years ago was discovered to have ended up in southern Mexico, in the north of the Yucatan Peninsula. 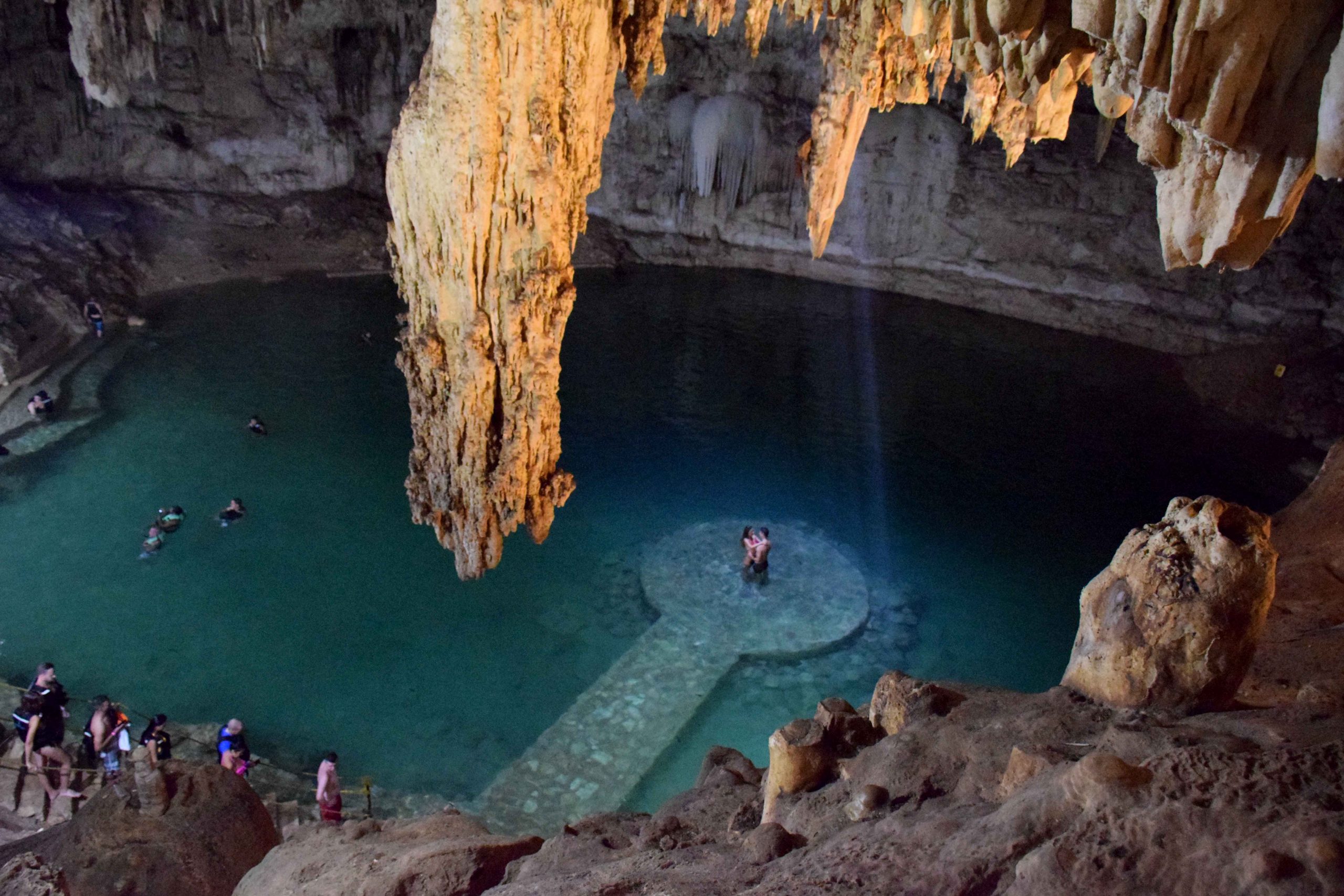 The Chicxulub crater was formed at a time when dinosaurs disappeared from Earth. When the site of the impact was found in the second half of the 20th century, it was a surprising discovery because the meteorite crater is extremely well hidden under a soft and very thick (around a kilometer deep) layer of limestone rocks. However, along the region of Yucatan, traces of craters can be seen on the surface in the form of a large number of very deep and large sinkholes filled with water called cenotes, which are naturally aligned along the edges of the crater’s basin. 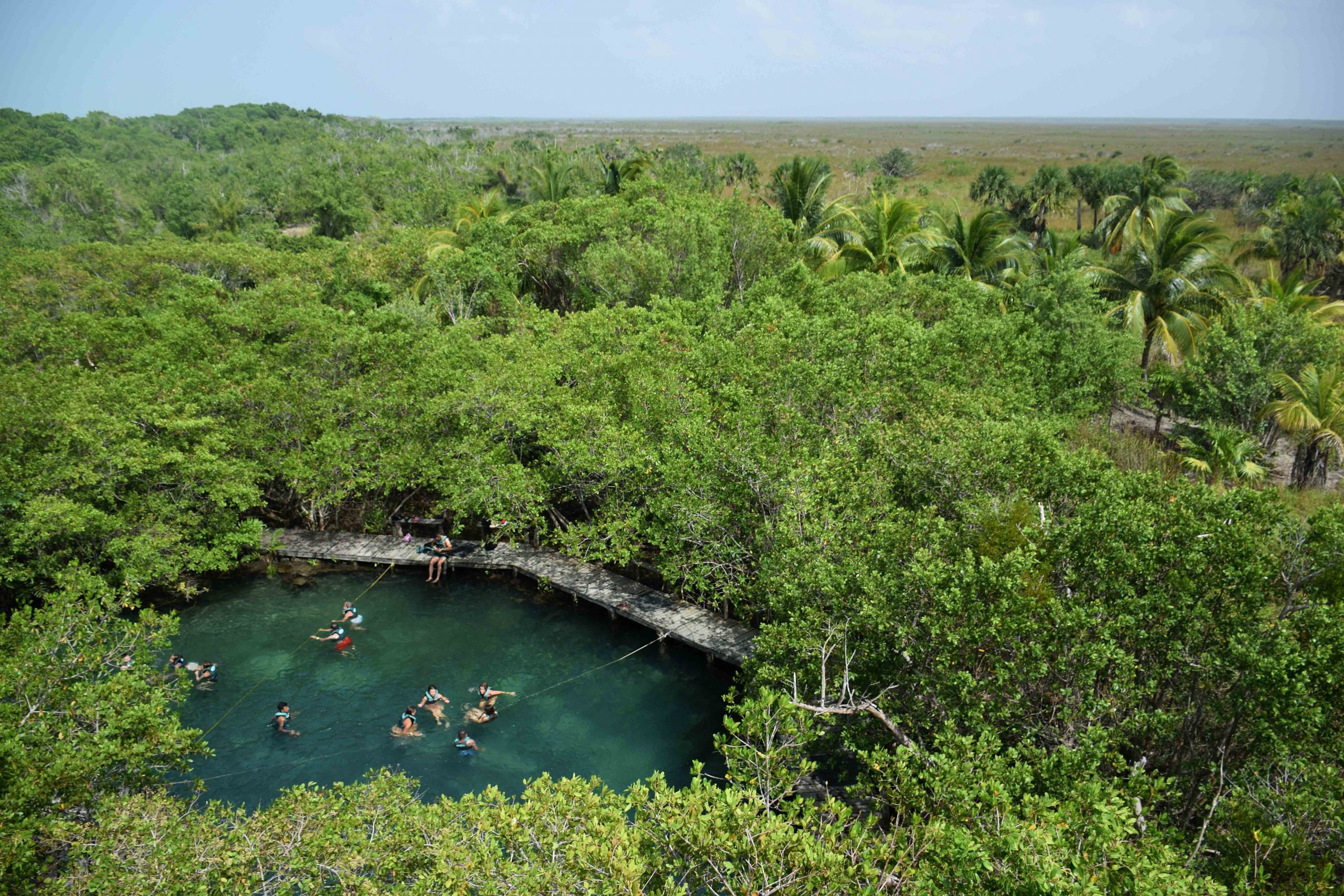 The Yucatan Peninsula has a net of underground rivers and cold freshwater lakes that can be seen inside limestone caves, which are called cenotes. Interestingly, over 6000 cenotes exist only on the Yucatan Peninsula and nowhere else in the world. The ancient Mayan civilization traditionally used them as sources of drinking water but also as holy places. In the craters,  inside the basins within the caves, Mayan relics used for rituals were discovered, which can be found today in museums all over Mexico. In the Mayan dialect, the word cenote (Ts’ono’ot) means “a hole filled with water.”

Swimming in the Underground Lakes 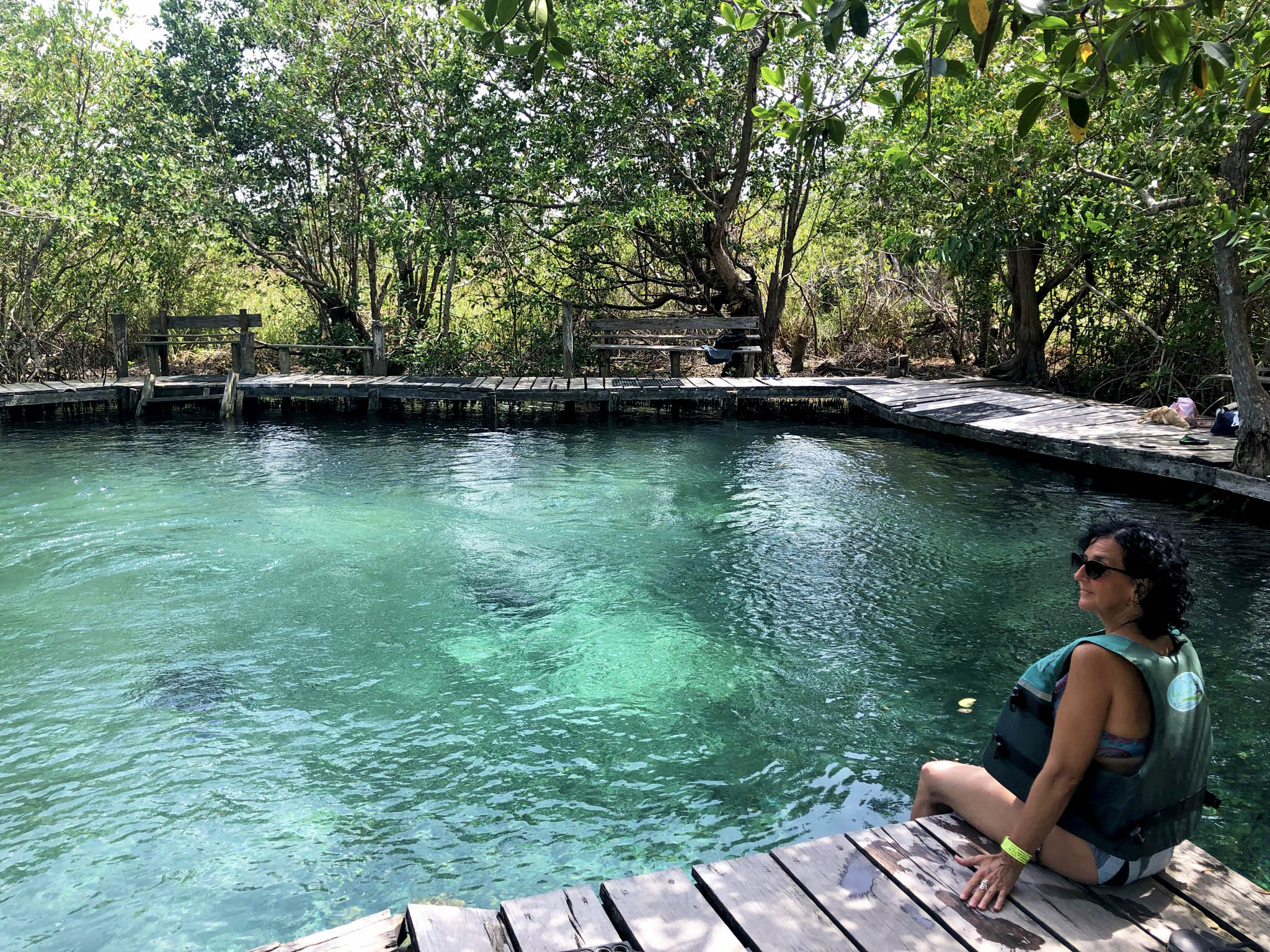 During my stay in the Yucatan, I visited several very different underground freshwater limestone lakes and swam in each of them. Today, the cenotes are one of the biggest attractions of this peninsula, and they are visited by an extremely large number of tourists. Yucatan is the sixth most visited tourist region in the world, and Mexico as a country ranks seventh.

The underground limestone lake Suytun (Cenote Suytun) is considered one of the most photogenic limestone caves in the Yucatan region with its natural freshwater basin filled with dark-turquoise water. It is interesting that this underground cave with its lake is completely underground – almost without a light source – and it can be reached by stairs. The only ray of light, which penetrates the ground and is seen in a dark environment above the turquoise color of the water, falls exactly on the place in the lake that is built like a stage, where people often wait in lines to take photos. Like other cenotes, the complex has an arranged entrance where visitors are charged an entrance fee not far from the crater itself. Instead of a ticket, we were given a paper bracelet (like in all-inclusive hotels) that you can use to move around the complex, use lockers to leave belongings, and use toilets and locker rooms. After you take off your bathing suit in the locker room, you must first take a shower and put on a protective swimming vest. It is not permitted to swim in the underground lake without a vest. 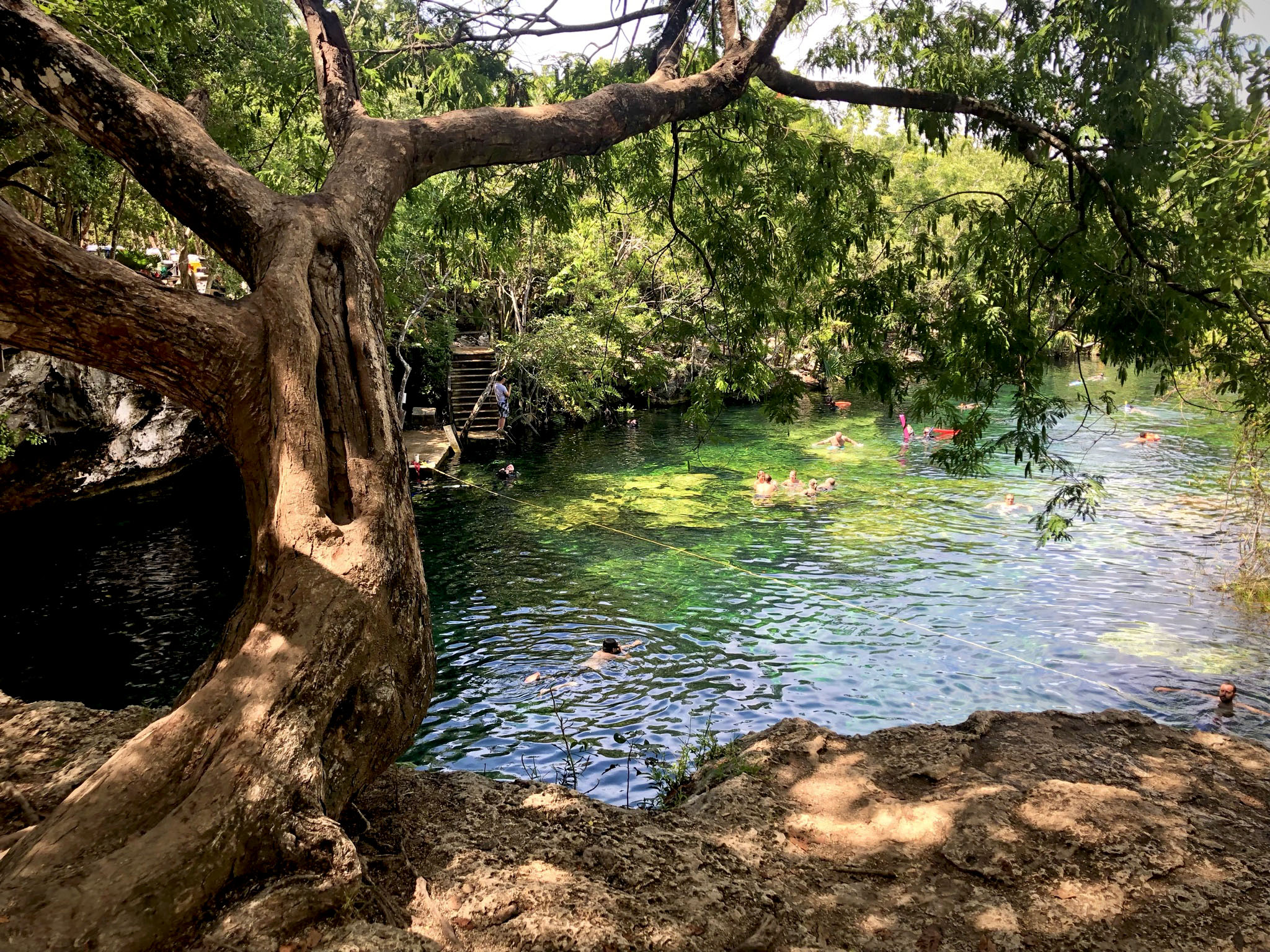 The underground limestone lake, Cenote Eden (Cenote Jardin del Eden), is not as popular as some other lakes, but swimming in this lake is much more relaxing than in those visited by a large number of tourists. The natural freshwater basin here is quite large, and the cenote itself is surrounded by a jungle, where iguanas can be seen, and a path that can be used to walk around the entire lake. The lake is often visited by divers, who explore the caves in the depths of the limestone lakes with oxygen tanks.

The underground limestone lake Ik Kil (Cenote Ik Kil) is considered one of the most beautiful limestone caves with its natural basin of turquoise-green water. This cenote is known for its incredible color and beautiful long vines but also as a place of history. This cave, which reaches depths of up to 26 meters, was visited by Mayan pilgrims in ancient times, who sacrificed objects and people here in honor of the god of rain, lightning, and storms (Chaac). Many valuable relics, which were found at the bottom of the pit, are kept today in history museums throughout Mexico. As in the case of other cenotes, this underground lake is reached by going downhill using a staircase.

With its nature and cultural heritage, the Yucatan region is one of the most interesting parts of the planet. It was ruled by the ancient Mayans until 10th century AD, and jaguars, pumas, quetzals, macaws, flamingos, tapirs, and adorable coatis (raccoon-like animals) live in the jungles of the peninsula. On the shores of the Gulf of Mexico, crocodiles and a large number of different species of birds live in the lagoons.