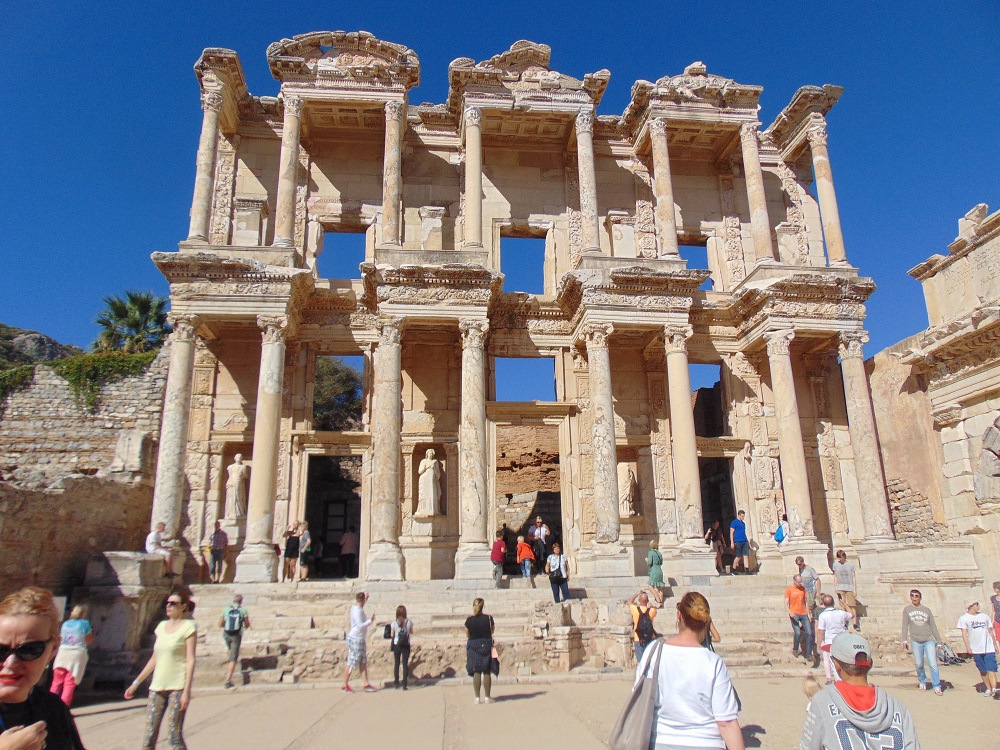 It began writing its history in mid-7th century B.C., and if we are to believe the legends it was founded by Amazons, female warriors.

As is the fate of many great people, cities, and countries, it seems that since its foundation, Ephesus has never had peace. Travelling through the time of imperialist pretensions, it was exposed to various forces, and it also changed location many times in accordance with needs and customs. During the rule of Lydian kings, it became one of the wealthiest cities in the Mediterranean world, and part of its story were also Persian rulers, such as Alexander the Great, who was proclaimed as divine here. Due to the intense events that took place there, Ephesus today is an important destination for studying history. It is considered that during Roman times there were over 250000 inhabitants living there, which compared to today’s times corresponds with the size of a metropolis. Today, Ephesus is one of the best preserved Greco-Roman cities in Europe and a top tourist attraction in Turkey.

Ephesus was the largest city in Asia Minor, which is today’s Turkey. It was a Greek port and a city of magic. It is also the place of birth of Greek philosopher Heraclitus. It is situated on the western coast of Turkey, near Kusadasi, a popular tourist destination on the coast of the Aegean Sea, and it is also not far from Izmir. Its former residents used to have immense respect for goddess Artemis, who was known as the goddess of fertility, and also as the goddess of the hunt in Ephesus. She was the daughter of Zeus and Leto. The Temple of Artemis, which was declared as one of the Seven Wonders of the World, was constructed out of white marble with over 100 huge columns towards the end of the 4th century. Even though today we can only see its remains, we can still imagine the nobility and sublimity of the temple at this location, which used to leave visitors breathless. The Temple of Artemis was a highly respected holy place. It served as a refuge for people in need, and as nobody dared steal anything from inside of it, it also served as a bank under the administration of a priest. It was lost completely when Christianity became the official religion of the Roman Empire, only to have its remains discovered by British archaeologist John Turtle Wood in the 19th century.

Ephesus was also home to the famous Celsus Library, a public institution of Roman times in Ephesus, the remains of which were discovered at the beginning of the 20th century. The library was erected at a time when there were numerous public libraries in the Roman Empire, and these were founded most often by wealthy or influential people of that time. Such is the case with Celsus Library, erected between 117 and 125, by virtue of the family of Julius Celsus, a politician and senator during the Roman Empire; his family belonged to the order of knights.

The library was located in the ancient city centre south of Lower Agora, one of two market squares designated for ceremonies, gatherings and trade. Its doors and windows opened towards the east, based on the instructions related to the construction of libraries by Roman architect Vitruvius, who considered that the morning light could dry books and preserve them from mould.

House of the Virgin Mary

On Mount Nightingale, a few kilometres from Ephesus, there is a small and humble Roman stone house with a special symbolic power. It is a house where not long after the death of Jesus, his mother, the Virgin Mary, took residence, and who, according to legend, arrived in Ephesus together with Jesus’ disciple John. Here, pilgrims believe she died, or, as is said in the spirit of Christianity – this is the place of her Assumption. Mary’s house, which was discovered by a German monk in 1891 while on his pilgrimage, is decorated as a chapel with an altar. Believers see it as a shrine and today it is known as one of the most visited important pilgrimage sites in Christianity. It is frequented by thousands of visitors, and even Holy Fathers from the Vatican have come to see it. However, it is not just Christians who come here, but Muslims as well, who respect her as the chosen one among all women, the mother of prophet Isa (Jesus) p.b.u.h. Mary’s house is mostly maintained by nuns from the USA.

Two streets in Ephesus are very significant because of their cultural and historical legacy: Marble Street and Curetes Street. While there is a Hellenic theatre located in one of them, there is a tomb of princess Arsinoe IV from the 1st century B.C. in the other one. Behind, there is an entrance to Roman villas, and nearby there are the remains of a male public toilet, where sometimes even important discussions used to be held.

The locality of Ephesus was also the place of the construction of the Basilica of St John, Temple of Hadrian, Trajan’s Fountain, Hercules’ Gate, a monument dedicated to Gaius Memmius, Temple of (Emperor) Domitian, and Odeon Theatre where concerts were held and the city assembly congregated.