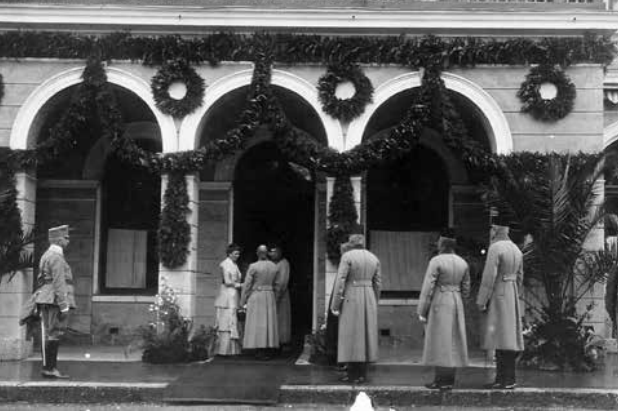 Although the Third World is used now as a derogatory term, the phrase was actually coined to describe the nations of the world who refused to follow the narrative of the Cold War; refusing to be subservient client states to either the Soviet Union in the East or the United States in the West. It was the history of these Third World nations that gave them the strength to refuse to be governed by outside powers, and few moments changed the trajectory of history so completely as the assassination of Archduke Franz Ferdinand and his wife Duchess Sophie in Sarajevo.

The events of 28 June 1914 are seared into the conscious of the entire world; as put by the historian Vladimir Dedijer, “… no other political murder in modern history has had such momentous consequences as the assassination of Archduke Franz Ferdinand…” And yet, for all that the names Gavrilo Princip and The Black Hand easily spring to people’s lips, very little is known about the week the Archduke and his wife spent in Bosnia and Herzegovina before they were killed.

It is a remarkable oversight, particularly given the abundance of tourism potential that stretches far beyond the square in front of the Latin Bridge and the former deli that is now a museum.

The morganatic marriage of Franz Ferdinand and Sophie Chotek remains at the very center of the assassination story. Targeted by most of the nobility in Vienna for daring to marry “above herself”, the Duchess took her treatment in the Imperial Court with equanimity and calm, even through such petty treatment as having the Grand Master of the Imperial Court, Count Montenuovo, alter her official photographs to make her look uglier and older.

Restrictions on Sophie had been gradually lifted through the years, however, and by 1914 she was allowed to appear with her husband during military engagements if not during royal ones. The visit to Sarajevo was a military visit, where Franz Ferdinand was to observe troop exercises on Mount Igman. Sophie could appear in public with him – but she could not be seated next to him at official dinners.

The Imperial couple arrived in Sarajevo separately. Sophie traveled the entire way by train, arriving in Ilidža early on 25 June and taking up her suite at what is now the Hotel Austria and Bosna. Franz Ferdinand traveled down the Adriatic coast on the dreadnought Virus Unitis, disembarking in Croatia and traveling up the Neretva River before disembarking at Metković and boarding a train that would take him to meet his wife. Before reaching Sarajevo, however, the Archduke had a stop in Mostar, where he was met by the Mayor and did a small tour. The Archduke, who had tremendous trouble with languages that were not German, even spoke a few words of the local language.

When Franz Ferdinand’s train arrived in Ilidža, trumpets and cheers greeted him. One journalist of the time reported the Archduke’s reaction to the cheering people who watched him drive along the street, saying he appeared, “… deeply moved with emotion, and saluted the gathered people, smiling and thanking them.”

Sophie waited on the steps of the hotel, rushing to greet her husband with a hug when he arrived. The suite of rooms that the Imperial Family used at the Hotel Bosna was on the first floor. Little remains today of the old decor of the hotel or of that suite (which was badly damaged in the 1990s), but the bannister on the stairs is the same bannister the Archduke and the Duchess gripped when they made their way down to the main areas of the hotel, and the long terrace from which they took in the views and clean air of the resort is still standing and has been beautifully restored.

The suite was decorated by a local Sephardic Jewish merchant, Elias Kabiljo. Kabiljo spared no expense creating luxurious Ottoman-style quarters for the Archduke and Duchess, with carpets, embroideries, wall hangings, and even an Ottoman-style suit of armor. The decor was arranged and overseen by his wife and Franz Ferdinand and Sophie were enchanted with it. “We have delightful quarters,” the Archduke sent in a telegram to his children. “The weather is beautiful.”

Following Them in Secret

The evening of their arrival, the Imperial couple decided to make a last-minute visit to Sarajevo’s Baščaršija. While there they made a specific stop at Kabiljo’s shop and purchased even more rugs, porcelain, needlework, and jewelry, making a specific effort to praise the beauty and quality of the shopkeeper’s offerings. The couple had no visible security, and were nearly mobbed in several places by crowds shouting, “Živio!”

Most likely because of the lack of security, a gaunt looking student with an intense expression was not noticed. But Gavrilo Princip followed the Archduke and Duchess as they made their way through Baščaršija, a gun in his pocket remaining unfired on that day.

It was not the Imperial couple’s only encounter with one of their future assassins: while they walked in the hotel park Nedeljko Čabrinović was seen skulking around the couple, but because his father was known to be a spy for the Austro-Hungarian government, the police did not detain him.

While Franz Ferdinand observed the maneuvers of the 2nd Battalion of the 92 KuK Infantry Regiment on Igman, Sophie returned to Sarajevo on the 26 and 27 of June. She visited Catholic and Orthodox cathedrals along with their associated orphanages as well as a weaving mill where she purchased even more carpets. All along the way she donated funds from her private accounts to Catholic, Muslim, and Orthodox organizations. Sarajevski List newspaper reported, “… people gathered in great numbers, cheering her all the time.”

For fourteen years, Archduke Franz Ferdinand had been enraged by the treatment of his wife at the hands of the Imperial Court, but her popularity and warm welcome in Sarajevo greatly moved him.

He had fought against visiting the city before the journey commenced, but during the banquet at the hotel on the evening of 27 June, his gratitude to the city for its traditional Gostoprimstvo had him raise a toast saying, “I’m beginning to fall in love with Bosnia. If I still had prejudices, they are gone now.”

The safety of the Archduke was a major discussion point amongst the 41 guests of the banquet (which featured nine courses). The vice-president of the Bosnian delegation attempted to appeal to the Duchess, who responded to his concern by saying, “Things don’t always turn out the way you say they will. Everywhere we have gone here we have been greeted with so much friendliness, and by every last Serb, too, with so much cordiality and spontaneous warmth.”

Franz Ferdinand, however, seemed swayed by the arguments of safety until Bosnia’s Governor-General Oskar Potiorek broke in and nearly accused the Archduke of cowardice, claiming that cancelling the visit to Vijećnica on the 28 would cause incalculable insight and very well might lead to open rebellion against the Habsburg rule. The Archduke acquiesced, the meeting the next morning would go on as planned.

A small chapel had been prepared for the Imperial couple’s private worship within the hotel (its location has been lost to history), and as was their habit they prayed in the morning before attending breakfast and their daily schedule. It was the last prayer service the two would attend.

The rest of the story is well known. The Archduke and his wife were driven from Sarajevo’s train station and narrowly escaped a bomb thrown at them near the Ćumurja Bridge. The Archduke gave his speech at Vijećnica from bloody notepaper. The Muslim wives of Sarajevo’s elite met Sophie for a reception. All of Franz Ferdinand’s group, with the exception of Oskar Potiorek, argued for a change to the day’s schedule in the wake of the assassination attempt, but Potiorek again used shame as a tactic against the Archduke, “What, do you think all of Sarajevo is filled with assassins?” he shouted.

As we now know, Sarajevo was. The Archduke and his wife were murdered on the now-iconic intersection at the Latin Bridge. Their bodies were taken to the Konak where they were laid out and autopsies performed, and the local sculptor Ljudmila Valić was called to make death masks of the two. A Sarajlije undertaker provided his best coffins.

When the coffins were taken to the Bistrik Train Station, Archbishop Josip Štadler gave a final benediction. As reported by Sarajevski List, “All present had tears in their eyes and the deadly silence spoke louder than any words.”

As the coffins pulled out of the train station, the staff of the Imperial couple gave the Sarajevo Youth Center 1000 crowns, which the Duchess had planned to donate before her death. Her last act in Sarajevo was not her death, but her bequest to a charitable organization.