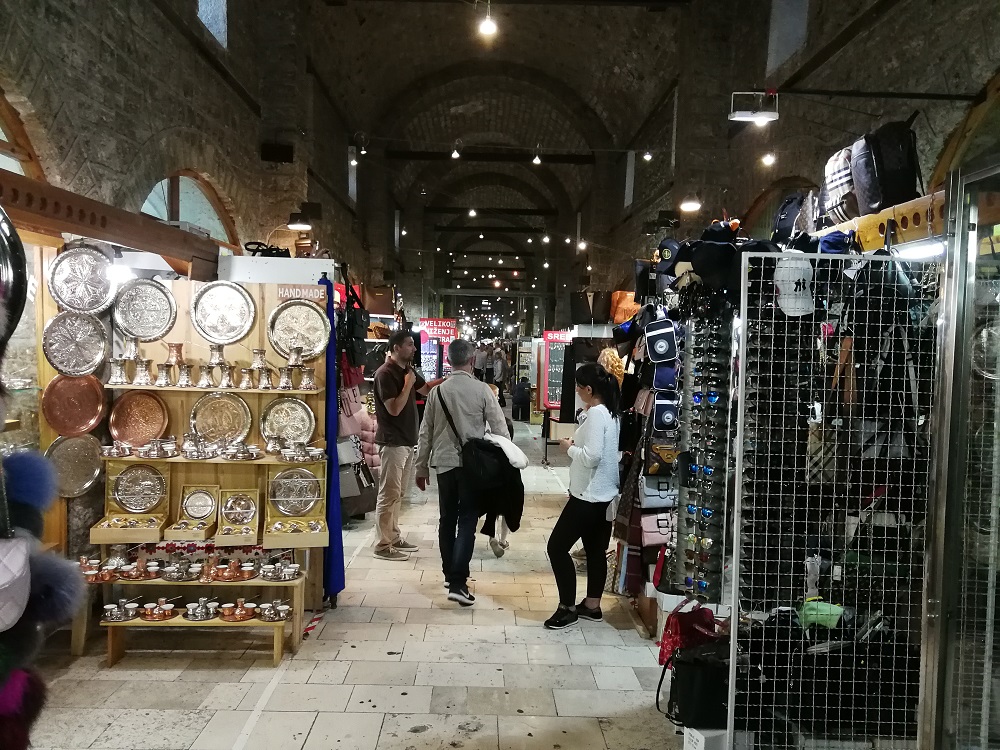 While B&H was still under the wing of the Ottoman Empire, the most well-known pages of history books covering Sarajevo as it was back then were full of stories of renowned Ghazi Husrev Bey, a great hero who later become Bosnian sanjak-bey (governor). He gave an urban vibe to the city by endowing his fortune in a waqf, an inalienable charitable endowment under Islamic law, and by building impressive structures used for different purposes; in other words, in the name of God, he gave over his property to people so that they could make good use of it.

Small Part of Istanbul in Sarajevo

If you head to Baščaršija from the Eternal Flame and stroll along the Ferhadija Street, about a hundred meters before the most famous structure he ordered to be built—the stunning Bey Mosque—your eyes will become fixated on an impressive stone edifice: the Ghazi Husrev Bey Bazaar.

After descending a few steps, you begin to detect the smell of the structure that was built in the 16th century bearing the features of the architectural style and design associated with that period. The central corridor is stuffed with lots of shops with large windows made of glass and wood giving the bazaar’s shopping area a unique vintage touch. Since the temperature in the bazaar is somewhat lower because it was built below the level of the neighboring streets, it is particularly pleasant to shop here in summer.

Ghazi Husrev Bey Bazaar reminds one of the Kapalıçarşı in Istanbul, but it is substantially smaller. The central area of the bazaar is covered by an elongated barrel-shaped vault and numerous little lights resembling a starry sky shine underneath it. Its exterior is made up of semi-circular arches, and one can get into the bazaar through one of the four entrances: two from the Ghazi Husrev Bey Street, which is dotted with shops stretching over an area of 100 meters in length, mostly jewelry shops after which it was named the Jewelry Street, and one entrance from both the Ferhadija and Branilaca Sarajeva streets.

The vaulted area on the west side of the Bazaar used to link it to the Tašlihan garden, the third caravanserai built in Sarajevo, which also used to be a part of the trading complex where caravans and travelers could stay and rest. It was constructed at the same time when the bazaar was constructed and represents a part of Ghazi Husrev Bey’s endowment. Destroyed remains of a stone wall leaning against the Ghazi Husrev Bey Bazaar, which was designated a national monument of B&H, is all that is left of it.

Construction of large shopping malls of contemporary architectural styles marks the modern era in business in Sarajevo, but still, tourists find it particularly appealing to peek into the bazaar which had also been a shopping area five hundred years ago. And, it has stood the test of time, and its value is enormous.