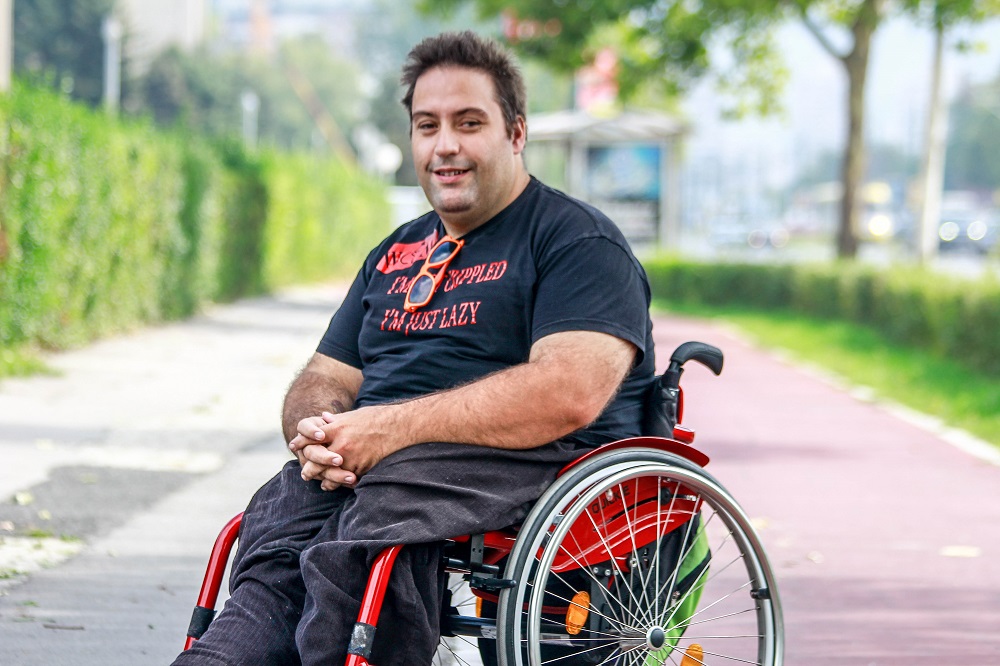 “It makes me feel good when I manage to make someone laugh sincerely and send a message. That is why I love being on stage”

A person can educate themselves for anything they want to become, but this is hardly the case for being a comedian. On that topic, among other things, American comedian Steve Harvey said on one occasion: “You have to be born with it. It is a gift from God.” For Sarajevan stand-up comedian Jasmin Džemiđić (35) it was a gift from up above, but it took a long time to realise that entertaining people can turn into a profession.

As he was born with polio, Jasmin always knew that the time when he would no longer be able to walk would come. That is why even as a child he dreamed of being an actor, of being on stage, which, he himself believes, is connected to the fact that has a disability.

“I probably wanted to feel what it means to be someone else, or some other people. But as the Academy of Performing Arts is not architecturally fitted for people with a disability, and the actual study program required movement, I never even tried. Because, when I do something, I want it to be thorough”, says Jasmin, whose path to comedy opened up through an online advertisement by Magacin Kabare (Little Warehouse Cabaret) for a stand-up comedian.

“I decided to give it a shot, because I always liked making people laugh, and during that performance I realised that it could be a job. People reacted well and awarded me with a huge applause. It was breaking the ice, but also an opportunity to talk about the problems that people with a disability face in our city in a humorous way, not just people in a wheelchair, but also blind and visually impaired people, and others. It has been five years since then, and this whole time that I have been working comedy has been primary to me, but along with that it is very important to me to point to our harsh reality”, explains our interviewee, whose health was made even worse when he was hit by a motorcycle. This is how at 18 he became immobile, losing his beloved mother at the same time, and ten years later also his father. 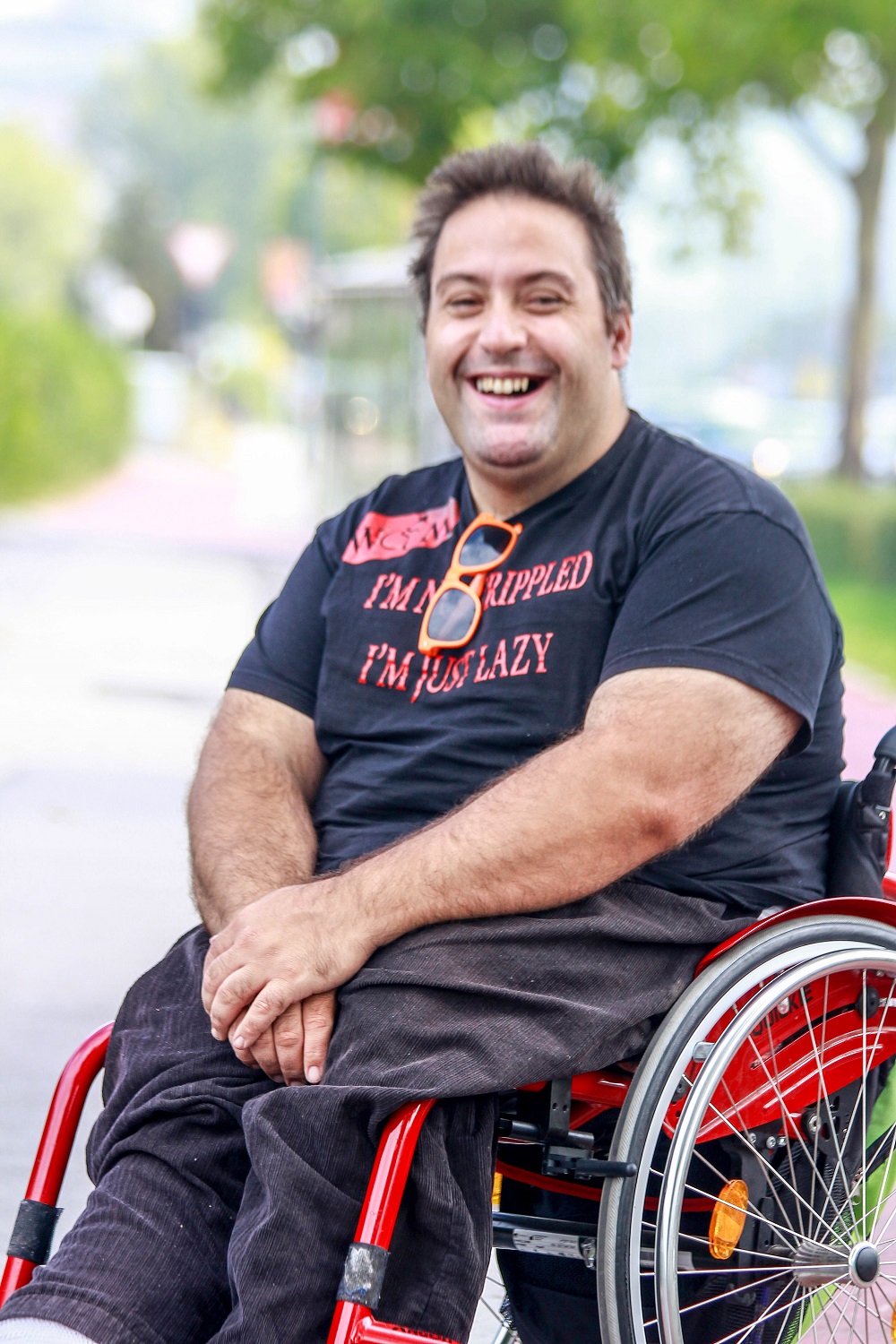 He used everything he lived through and witnessed as a young man for writing his material, which in the beginning had some sensitive reactions from people with a disability.

“I spoke of things which at first glance are not visible, but I managed to break through the shame and the truth began to be viewed differently. I don’t mention anyone personally at my shows. The stories just affect people through their diagnoses. Today things are different. Acquaintances usually say to me: ‘Go for it, whatever happens’. It makes me feel good when I manage to make someone laugh sincerely and send a message. That is why I love being on stage.”

The effects of Jasmin’s work are best seen through reactions in everyday life.

“One time I was going up Otoka towards home and a man stopped his car to tell me: ‘It’s because of you that I no longer park on the sidewalk, I learned that it’s not something that should be done.’ Those are the small triumphs.”

Jasmin duly records his jokes, especially when he hears something interesting.

“I’m quite self-critical. I write, and then I throw something away, as I always expect to feel a joke – that is the only way to tell it”, says Jasmin, who likes to follow the work of a few world-famous comedians, like Fluffy, as well as British comedian Jimmy Carr, because he tells it like it is.

“I don’t write jokes in the form of long stories, because I don’t like to memorise long chunks of material. Even though it is practiced and repeated daily, stage fright is still there. If I have 50 jokes, I’ll forget five.”

Currently, Jasmin Džemiđić is on a break for health reasons and he will return to comedy when he has completed some necessary surgeries. A huge challenge would be to perform at clubs in the region, and something new which he also plans to do in his work is to write material for his shows in English.

“English opens the door to a large part of the world. I’d like to see what I can achieve that way”, he concluded. 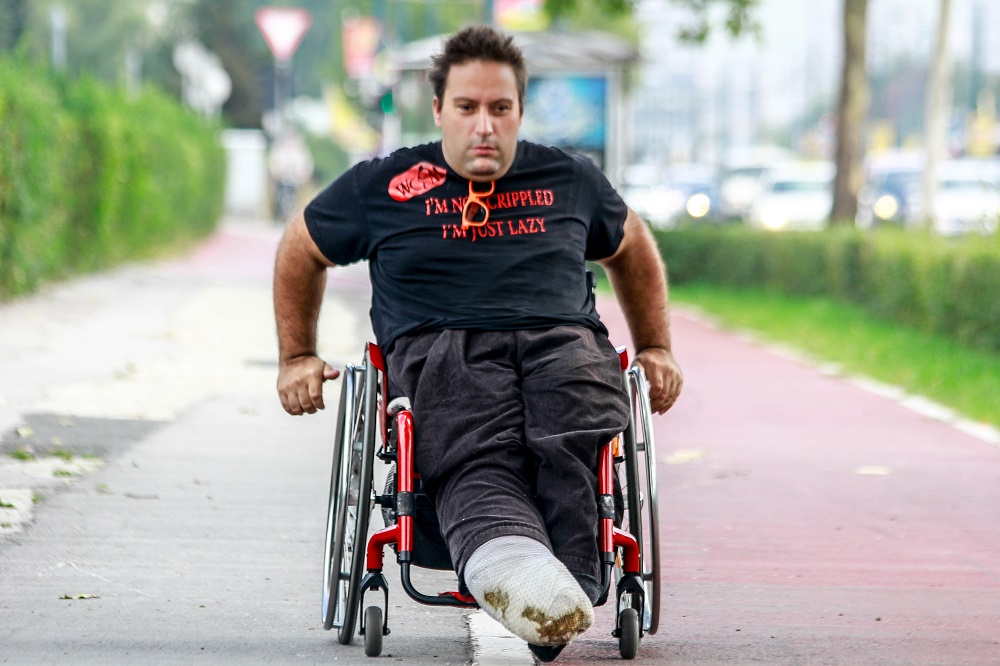 Family as a support system

“My family had the most significant role in preparing me for what was coming even as a child. My mum told me to do what I want, but that if I saw that I couldn’t, to simply accept it as something completely normal. Today my greatest support comes from my sister with her two children. We live together and the kids fulfil me completely. I’m a strict uncle, but it’s for their own good. It’s not easy to raise children, however, it’s important to me that they learn that there is a system and that commitments are fulfilled.”

“I’m never the sole focus of my thoughts. Happiness is not just about changing things for myself personally. I want more than anything for the way that this country treats people with a disability to change drastically. I’m trying to make that happen also as a member of the Association of Paraplegics and Polio Survivors of Canton Sarajevo, where I am also a board member, all for future generations. You can remove the architectural barrier, you can turn stairs into a ramp, but it is important to change the barriers in people’s minds.”