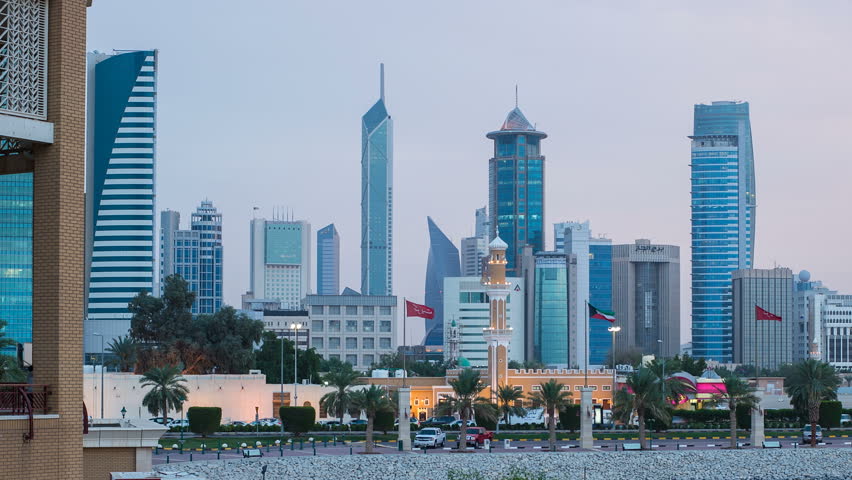 Kuwait city can be described as a vibrant metropolis of countless skyscrapers, broad boulevards and beautiful parks, trimmed and watered regularly, even when the temperature outside soars to scorching 40° C.

This amazing city is located in the immediate vicinity of the confluence of two famous Biblical rivers, the Tigris and the Euphrates, near the place where they join, just to end their journey in the Persian Gulf. Situated between Iraq and Iran, Kuwait has enormous reserves of oil, concentrated in a relatively small area. In addition to large oil tankers, the Kuwait harbour also welcomes large freighters and smaller vessels transporting tourists.

The most famous Kuwait attractions are the Kuwait Towers, the Liberation Tower and the Grand Mosque.

The old part of the town is where one of the two palaces of the ruling Emir of Kuwait – the Al-Seif Palace is situated. It was built in 1896. It is the place where the Emir of Kuwait administers the state affairs. The Ruler’s residence is located in the Dar Salwa Palace. Neither of the palaces is opened to visitors. The Bayan Palace is the official seat of the Government of Kuwait.

The famous Kuwait Towers are the unofficial symbol of the modern-day Kuwait, represented on most souvenirs or posters portraying city landscape. The towers complex consists of two towers featuring two spheres and the third – an elegant, slender tower, which illuminates them at night. Their fascinating design and tiled façade which reflects the light capture the attention of local and foreign tourists. One of the towers serves as a water tower, while the other features a rotating restaurant and observation post offering remarkable panoramic view of the city.

It is interesting to note that the towers, built in 1979, were designed by the Swedish engineering company, while “Energoprojekt” from Belgrade, a major Yugoslav construction company, implemented the project.

In addition to a wonderful panoramic view of the city, the tower also features an exhibition of photos which captured the beginning of the Gulf War. Most of them depict the scenes of the Iraqi army damaging the towers during the conflict. If you decide to travel to Kuwait, note that you would not be able to enter the towers, since extensive renovation works are currently underway. It is expected that the works would be completed in August of 2016.

The famous Kuwait Water Park is situated in the immediate vicinity of the towers. Another major landmark worth mentioning is the famous Liberation Tower, which is currently closed to visitors.

This town features amazing cultural institutions, located just a few hundred meters apart. These institutions include the National Museum (displaying a modest collection of Kuwaiti artworks and reconstruction of the so-called “souq” – a street in the Middle Eastern bazaar); the Grand Mosque; the building of the Kuwait Stock Exchange; Bayt Al-Badr house – one of the rare buildings showcasing the traditional architecture; the Sadu House – made of coral and plaster, featuring an impressive display of the exhibits showing the old Kuwait crafts; the National Assembly Building and the Kuwait Gulf War Memorial, displaying the exhibits from the Gulf War era.

However, many people agree that, apart from the Kuwait Towers, the most interesting place in Kuwait City is its fascinating Fish Market, remarkably clean and neat and incredibly attractive. It offers tremendous variety of fish and shellfish.

As you conclude your visit to Kuwait, make sure you reserve one of the late afternoons during your visit for an easy stroll along one of the lovely promenades by the Persian Gulf. Once there, you can take a quick break and rest on one of the benches across the street from the most famous Kuwaiti shopping mall – Souq Sharq Mall, get a piece of pastry with fruit or olives and enjoy the view. Those who want to experience the local restaurants will not be disappointed. The city features wonderful Lebanese, Iranian (Persian), Chinese and Indian restaurants.