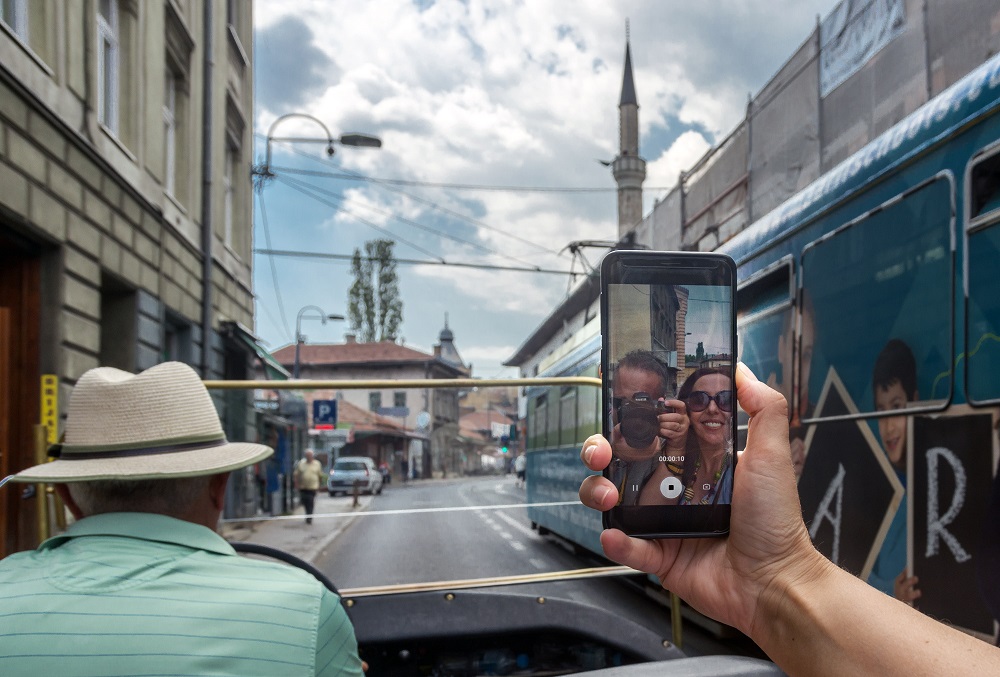 Sarajevo has preserved the remains of the first Illyrian settlements and traces of medieval life, the Ottoman and Austro-Hungarian buildings have made it one of the prettiest cities of the world, you cannot miss the marks of former Yugoslav architecture, and since it started rising like a phoenix from the ashes from the war – modern buildings and towers have been built.

In order to experience it in its full glory and size, we recommend that you try seeing it in a completely different way – try some of the excursions that clever Sarajevans offer

From spring until fall, you can take a ride along Sarajevo in a replica of the car in which the Austro-Hungarian heir to the throne and archduke Franz Ferdinand and his wife Sophie were assassinated on June 28, 1914, which is what set World War I into motion.

You will be cordially greeted in the car by Sarajevan Edo Kapetanović in front of the Museum of Sarajevo 1878-1918, near the place where the assassination took place. Kapetanović created the replica of the car branded Gräf & Stift-Double Phaeton from 1910 himself, and manufactured it, calling it Ferdinand. He now introduces tourists to the city in the car, aiming for them to see all the beauty of Sarajevo in a good mood, and to only take positive impressions and nice stories with them.

Full of positive energy, Edo tries to be the best promoter of Sarajevo. He likes to first show tourists Austro-Hungarian and Ottoman cultural legacy, and he also loves to take them to a vantage point with local specialties, all with the purpose of giving Sarajevo a great reputation across the world. Apart from tourists, he has given a ride to many celebrities in the Ferdinand – from politicians to artists, both local and international.

Panoramic sightseeing of Sarajevo by autogyro

Seeing Sarajevo from a height of 300 meters or 3 kilometers from an open aircraft is an experience that will remain with you forever. The expansive and fascinating landscapes in front of you and beneath you, and a heart beating loudly from excitement will contribute to your enjoyment of every kilometer of the autogyro ride; the autogyro is actually an open aircraft with two seats.

If you decide to experience the city in a completely different way, the service of panoramic sightseeing is offered by private airline FUNFLY. Their autogyro takes off from the Sportski Aerodrom (Sports Airport) in Visoko with a professional pilot.

Old horse-drawn carriages have been driving from Velika Aleja (Great Lane) at Ilidža to the very spring of Vrelo Bosne for the last hundred years – the ideal place to escape the noise of the city, because of the invigorating clear air, pleasant climate and beautiful landscape, which probably makes it the prettiest place in the city. Even though you can reach Vrelo Bosne by car or on foot, you must not miss a ride in the horse-drawn carriage. The ride along the 3.5-kilometer-long lane lined with chestnut and plane trees that are over a hundred years old will last for around fifteen minutes, but you will remember it for the rest of your life.

On the very plateau at the entrance to Velika Aleja, you will be greeted by many coachmen with tempting offers. One of them is Dženan Mahmutović, who is preserving the hundred-year tradition of his family of blacksmiths from Butmir. He still drives and maintains the carriage of his grandfather, who had one of the first horse-drawn carriages in Sarajevo to be privately owned by a family. He inherited his love of the carriage from his father, and he had his first solo ride in the horse-drawn carriage along the Aleja and back when he was only ten.

He has been in this specific field of work for thirty years. As he meets different groups of people from all over the world on a daily basis, he has learned English and a lot of information about his city, so Dženan is also a kind of tour guide now. He loves having a chat with tourists, revealing some details to them that they would never hear elsewhere, and there is always a lot of laughter in his carriage.

All the listed excursions you can book a ride by phone