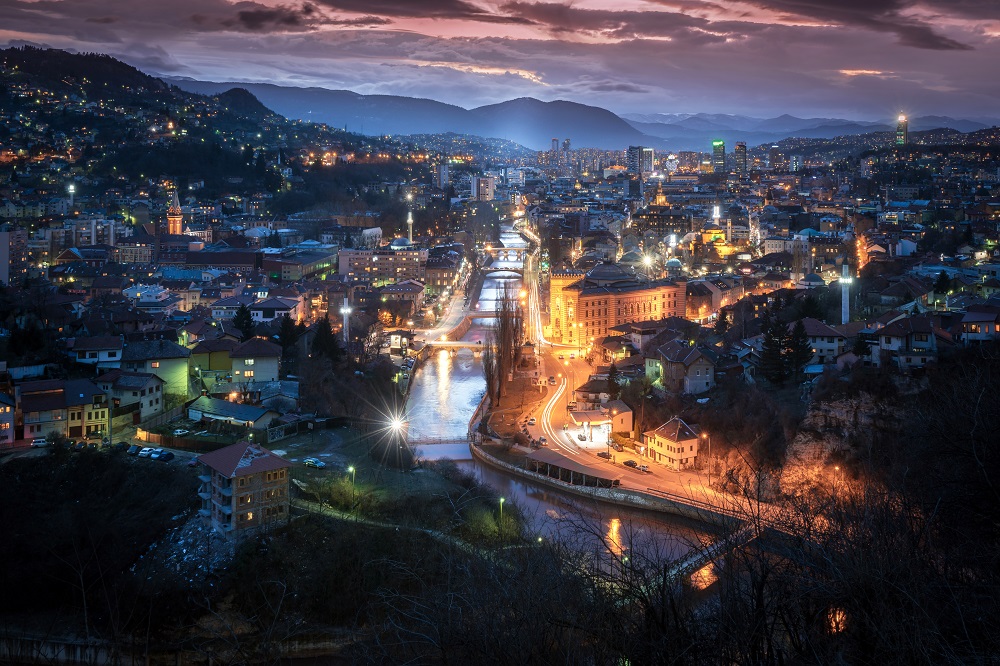 About twenty bridges have been built on the Miljacka River, which runs through Sarajevo. Some of them long ago, some more recently. However, each one is interesting in its own way.

When you stand along Miljacka River, in the part of the city where architectural beauty Vijećnica (City Hall) is located, towards Bentbaša, you get the impression that there must be a lot of bridges looming over this river. From that perspective, with shorter distances, you can see a couple of them, lining up one after the other, connecting the banks of the river with their arches, a river that forms a few kilometers east of Sarajevo, in the village of Dovlići, where Paljanska Miljacka, which originates at Pale, and Mokranjska Miljacka, which originates at Kadino Selo, merge. Miljacka River then flows towards the west, to Sarajevo. On the riverbed, which can for the most part be seen from the main road, there are twenty bridges, and then there are another two, once the Miljacka River turns towards the suburb of Halilovići. Miljacka River flows to Bosna River, where they merge.

One of the oldest bridges in Sarajevo, Goat’s Bridge is situated in the canyon of Miljacka River and is located only a few kilometers from Vijećnica (City Hall), a top tourist attraction. Presumably, it was built in the 16th century, during the time of vizier Mehmed Pasha Sokolović. At one time, there was an „Istanbul road“ here, which one could take from Sarajevo to travel to the eastern parts of the Ottoman Empire, all the way to its capital – Istanbul.

You’ll find this national monument of B&H in the immediate vicinity of Vijećnica (City Hall). There is a family story related to its construction, which tells of a father who decided to build a bridge, because his son went away to Istanbul and decided to not come back. However, due to his death, construction was suspended, and then continued by the son, who came back to Sarajevo once he heard about what happened to his father. According to some legends, the bridge was built in 1585/1586, while others claim that it was in 1620.

The name itself points to where it is located, near Vijećnica (City Hall), on the other side of the road, which leads towards the shops and hospitality establishments of Baščaršija. The bridge is newer, in existence since 2003, and due to its construction traffic has improved in this part of the city.

Despite the fact that it has been built, as well as demolished, ultimately, this bridge has managed to keep its original appearance. Firstly, the Emperor’s Bridge was built by nobleman Isa Bey Ishaković in the 15th century, but it was demolished during a flood in 1619. The stone bridge, which would later be built by Hajji Husein Aga Haračić, would have to be reconstructed. During Austro-Hungarian rule, it was already in a bad state. It was demolished and rebuilt to look like the original one.

Latin Bridge is also known as Princip’s Bridge in Sarajevo. For multiple decades, it was named after a young man, the instigator of an event known as the Sarajevo Assassination, when the heir presumptive to the Austro-Hungarian monarchy, Franz Ferdinand and his wife Sophie, were killed. In 1541, the Latin Bridge was initially a wooden bridge, but, sometime later, in the same century, it was rebuilt as a stone bridge. As it connected the right bank of the Miljacka River with a suburb with a Christian population – Latinluk, the bridge was called Latin Bridge.

This bridge also dates back to the distant past, to 1556, when it was built by Hajji Hasan, and it is believed to have been named after charcoal (ćumur) which used to be disposed of in its vicinity for the use of blacksmiths. As time went by, it had to be repaired, and in 1886 it was replaced by an iron construction. It is located near At Mejdan park.

The bridge was built in 1898. With the exception of the wooden fence, which has been preserved, its wooden construction was replaced by a concrete one in the 1980s, because it would often be flooded by a swollen Miljacka River. It is always dynamic at Drvenija, due to its proximity to high schools and higher education institutions.

The Čobanija Bridge is located one tram stop away from Drvenija, right across from the National Theater. At one time, it was also a wooden bridge, and its construction is accredited to Hasan Vojvoda in 1557. Over time, it was reconstructed, and at one point, an iron bridge was built in place of the old one, which did not withstand time. A new one rose above the Miljacka River in 1888.

Festina Lente is an unusually pretty bridge, which when translated means Hurry Slowly. It was built in 2012, near the Academy of Fine Arts, when its students of product design Adnan Alagić, Amila Hrustić and Bojana Kanlić came up with the concept design. The bridge connects Obala Maka Dizdara with Radićeva Street.

A bridge intended for pedestrians, it is also known as the Eiffel Bridge, because of a legend, which, truth be told, has not been confirmed by any written document, that it was designed by the same architect as the Eiffel Tower in Paris – Alexandre Gustave Eiffel. Firstly, the wooden bridge was built towards the end of the 15th or at the beginning of the 16th century by Ottoman governor Skender Pasha, and the suburb on the left bank of the Miljacka River was named Skenderija after him, while an iron bridge was built in 1893. After the war, the bridge was restored in 2004, and today it serves as a place where people hang up love messages.

Bridge at Skenderija with lanes

About twenty meters from Skenderija Bridge, there is a concrete bridge open to traffic, which was built in 1969, in the same year as cultural, sports and fair venue Centar Skenderija. Due to the war, the bridge suffered great damage, so it was restored in 2014. The bridge represents one of the busiest spots in the city.

The Suada and Olga Bridge stretches over the Miljacka River in the part of the city that comes out onto Wilson’s Promenade and the suburb of Marijin Dvor, where institutions of state importance and shopping centers are located. It was named after Suada Dilberović and Olga Sučić, the first victims of the siege of Sarajevo. They were killed on this bridge by Serbian army units on April 5, 1992. Kap moje krvi poteče i Bosna ne presuši (A drop of my blood runs and Bosnia does not dry up) is written on the memorial board, which was set up in their honor.

This bridge is located at Wilson’s Promenade, near the National Museum of B&H and the Historical Museum of B&H. It was designed by renowned Italian architect Renzo Piano, an honorary citizen of Sarajevo. The bridge was opened in 2002, representing a signpost towards the space of the future museum of contemporary art Ars Aevi, which is currently located at Dom Mladih (Youth Center) at Skenderija.

Former Bridge of Brotherhood and Unity

The bridge is located in Hamdije Čemerlića Street, connecting two large Sarajevan suburbs – Grbavica and Pofalići. It was built in 1951, during the time of communist Yugoslavia, when politics were permeated by the idea of togetherness and equality of all people, relying on the partisan worldview, which was summarized in the slogan of brotherhood and unity in the fight against fascism. That is why it was named the Bridge of Brotherhood and Unity.

The small pedestrian bridge is located across from Bristol Hotel, at Wilson’s Promenade, between two large bridges open to traffic – former Bridge of Brotherhood and Unity, and the bridge in Topal Osman Pasha Street. The bridge has been in existence since the time of former Yugoslavia.

It was built in 1973, at a time when Sarajevo was developing dynamically. It connects the suburbs of Grbavica and Socijalno, in the immediate vicinity of Elektroprivreda BiH, Robot Shopping Center and the Municipality of New Sarajevo. During the siege of Sarajevo, it was in the firing line and suffered great damage. It was restored in 2013.

Most often, Sarajevans call it Malta Bridge. Namely, it connects the suburbs of Dolac Malta and Hrasno. It was built in the 1970s. It was also damaged during the war, as well as many other city sights. It was restored in 2011.

Symbolizing the friendship between Malaysia and B&H, this modern bridge was put into use in 2005, when it was opened by former Malaysian prime minister Mahathir Mohamad. The Malaysian-Bosnian and Herzegovinian Friendship Bridge connects the suburbs of Čengić Vila and Hrasno, leading towards the large business and residential building – Bosmal City Center.

The bridge is located in the suburb of Otoka, near the famous Otoka Market. It was built in the 70s, but in 2010 it was named after American congressman Francis Xavier Frank McCloskey, a friend of B&H who advocated for the cessation of the war in B&H.

Close to Congressman McCloskey Bridge, there is a bridge which connects the promenade with the other side of the Miljacka River, where the Istiklal Mosque is located. The Olympic Pool is not far from here.