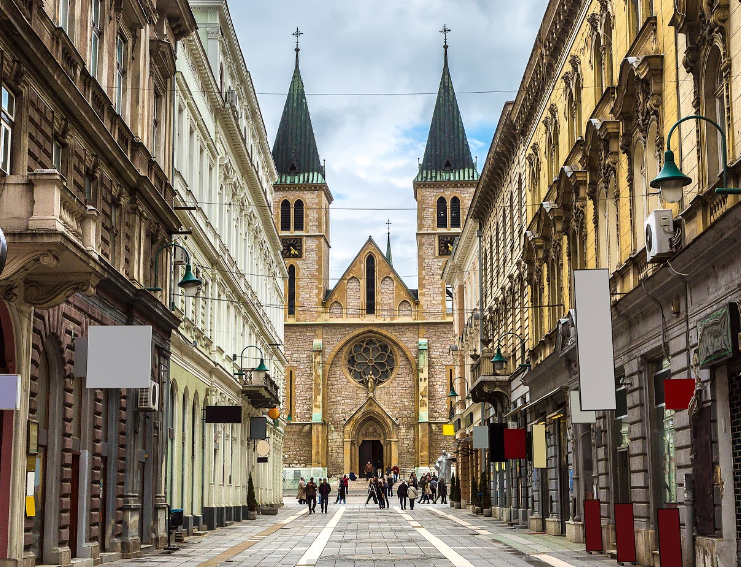 The Sacred Heart Cathedral in Sarajevo, one of the national monuments of Bosnia and Herzegovina, marked its 130th anniversary in September this year.

Since 1889, when it was solemnly blessed, this unmissable tourist attraction of the capital of B&H, has been a pillar of spiritual life for Catholics in Sarajevo, and it is dedicated to Jesus’ Sacred Heart, whose name it bears. To come to Sarajevo, and not visit the Sarajevo Cathedral, one of the most significant symbols of this city, is almost like not going to Baščaršija at all.

THE CONSTRUCTION OF THE CATHEDRAL

The cathedral is located in the municipality of Stari Grad (Old Town), at an attractive location; you can arrive here via the main city promenade. It was built at the initiative of Josip Stadler, the first archbishop of Vrhbosna, once regular church authority was reestablished in B&H. Stadler was enthroned in the small wooden Crkva sv. Ante (St. Anthony’s Church) at Bistrik, and one of his first tasks was the construction of a cathedral in Sarajevo, so construction of it began in 1884.

Heinrich Ferstel was offered the project of designing the Cathedral, as he had in the same year designed a project in Vienna and suggested that the church be constructed in a Romanesque style. However, that project was too costly for Sarajevo. Ferstel envisaged for the building to be in a spot which was in the meantime taken over by the army in order to build their own casino, so the whole idea fell through. A solution had to be sought again, and Friedrich von Schmidt, a professor at the Academy of Applied Arts in Vienna, recommended Josip Vancaš, along with the promise of helping to design such a significant building.

Vancaš came to Sarajevo as a young, but very well educated and talented architect. He offered Stadler solutions which he had no objections to, and the newly finished cathedral in Đakovo served as a model for both of them, and for many other masters of the trade who later brought their experience to Sarajevo. During winter in 1884, detailed drawings were made in the newly formed atelier of Josip  Vancaš. Vancaš became a sole trader, and the cathedral was envisaged as a building with space for 1200 people, with a very simple exterior, made out of stone. It was finished and solemnly blessed on September 15, 1889.

FUSION OF THE ROMANESQUE AND GOTHIC

By combining the elements of the Romanesque and Gothic style, Vancaš created a synthesis, which sets this building apart from others of this type. The length of the Cathedral is 41.9 m, and the width is 21.3 m. The facade is decorated with two massive towers 43.22 m in height, and above the shrine, a 33 m tower proudly rises. Under the towers, there is a horizontal front arch, and under it, there is a richly decorated rosette made out of stone and stained glass. Under the rosette, there is the Jesus’ Sacred Heart statue; Stadler dedicated the Cathedral and archdiocese to it. Above the slight Gothic overhead arch in the tympanum there is a relief of the Holy Trinity, based on the drawings of Aleksander Seitz.

The stained glass was done in Innsbruck, and the main altar was made out of Italian marble. The two frescos in the shrine are the works of Aleksander Seitz, as well as the ones on the side aisles in the inner walls of the towers. The shrine is separated from the main and side aisle by an iron fence, which was made by Antun Biro from Vienna, based on the drawings of Josip Vancaš.

The floor is made out of so-called Wienerberg tiles, which were very popular at the time. The Cathedral also houses the tomb of  Josip Stadler, and right next to the entrance to the Cathedral, a monument was erected in honor of the head of the Catholic church, pope John Paul II, who visited Sarajevo in 1997.

During the war, the Cathedral was not hit directly, but shrapnel damaged the copper roof in 580 places, and there is also visible damage to the outer walls.

The Sacred Heart Cathedral was declared a National Monument of Bosnia and Herzegovina in 2005, which speaks of the significance of this truly specific place of worship. The interior of the Cathedral was restored from September 27, 2010 until October 15, 2011.

Along with all the attractions of the city, many tourists who visit Sarajevo always gladly visit the Cathedral, where they form wonderful memories of its interior design and external harmony. Whenever you pass by the Cathedral, you will see visitors gathering and taking photos of it and enjoying its beauty. Join them and discover all the magic of the Sacred Heart Cathedral!