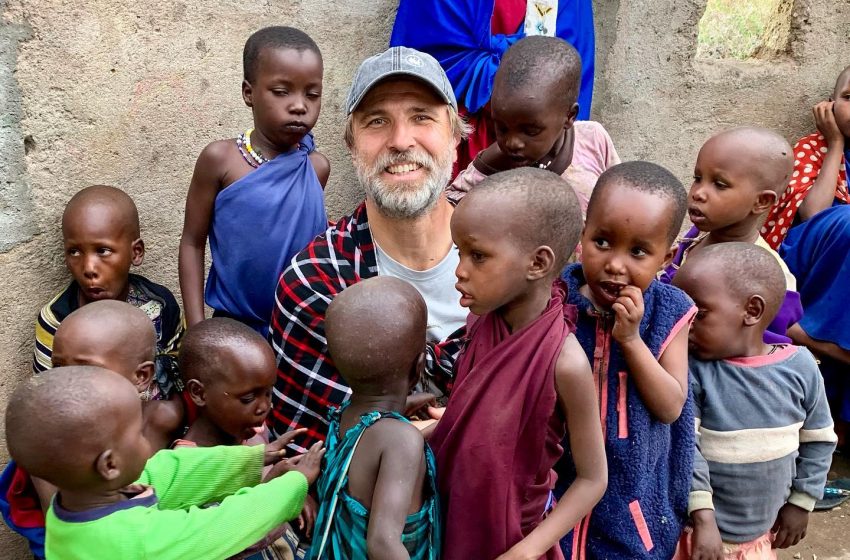 Tomislav Cvitanušić: At the Top of Africa

Tomislav Cvitanušić, triathlete and Bosnian-Herzegovinian alpinist, together with a group of alpinists from B&H, Serbia, Montenegro and Croatia, summited the highest point in Africa—Uhuru Peak—that sits on Mount Kilimanjaro. This is his odyssey

Mount Kilimanjaro is a volcanic crater dominating with its three peaks the border between Tanzania and Kenya. At a massive height of 5,895 metres above sea level, Uhuru Peak is the African continent’s highest peak. Rising 4,600 metres from its base to Uhuru Peak, Kilimanjaro is the tallest free-standing mountain rise in the world. To protect its numerous endangered plants and animal species, Kilimanjaro National Park was inscribed on the UNESCO World Heritage List.

Adventure Starts at the Airport

The ascent to Kilimanjaro is also the ascent to one of the seven peaks on each of the seven continents known as the Seven Summits. So far, the only Bosnian and Herzegovinian to have fulfilled his dream and scaled the seven summits is Naim Logić, an exceptional man living in Arizona. I have personally summited on the highest peak in Europe—Elbrus in Russia at 5,642 m, in South America—Aconcagua in Argentina at 6,961 m, and in North America—Denali in Alaska at 6,190 m. 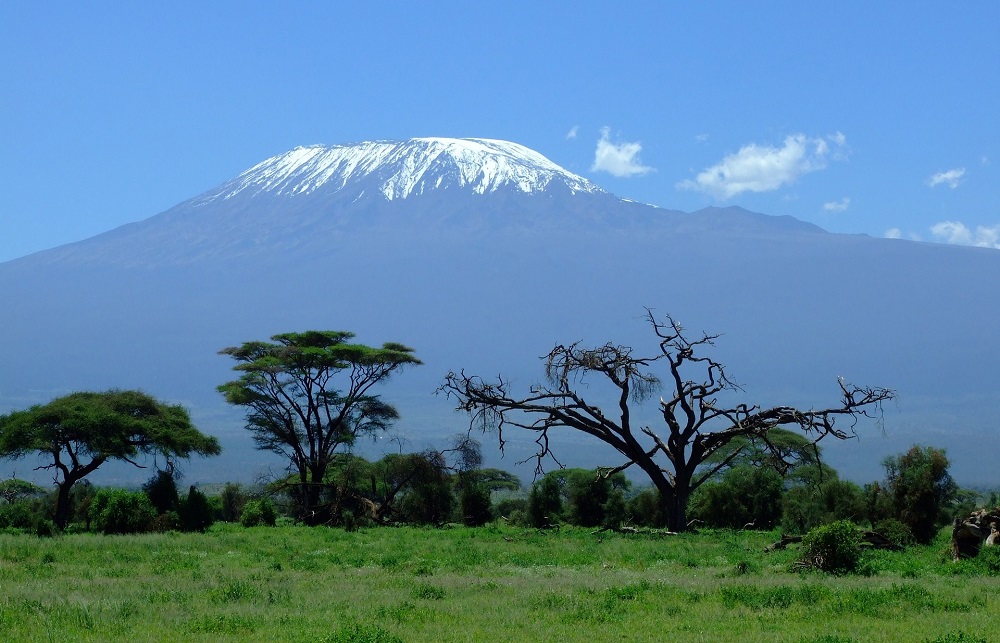 Making the climb to Kilimanjaro is an achievable challenge for hikers and high altitude mountaineers of all skill levels in good physical shape because it is a non-technical high altitude climb. For that reason, the number of people making the trek each year is large. The biggest challenge most trekkers face on the climb is the thin air at high altitude, but the trick is to acclimate to the thinner air they encounter as they climb.

Organised by EST Adventure, a team of climbers from Serbia, Montenegro, Croatia and Bosnia and Herzegovina met at Belgrade Airport. After about twenty hours of travel, we finally arrived at our destination. Adventure started at Kilimanjaro Airport. When we got our Tanzanian visas, we learned that our luggage had not arrived. The next flight was scheduled for the next day, at the same time, and we were trying to remain positive. It was going to be even more interesting to do a night-time route to the first base camp, because we were going to get off to a late start. We arrived at a hotel in Arusha, a poorly developed city by European standards, packed with sidewalk vendors selling food and souvenirs. We were only going to stay there for the night. 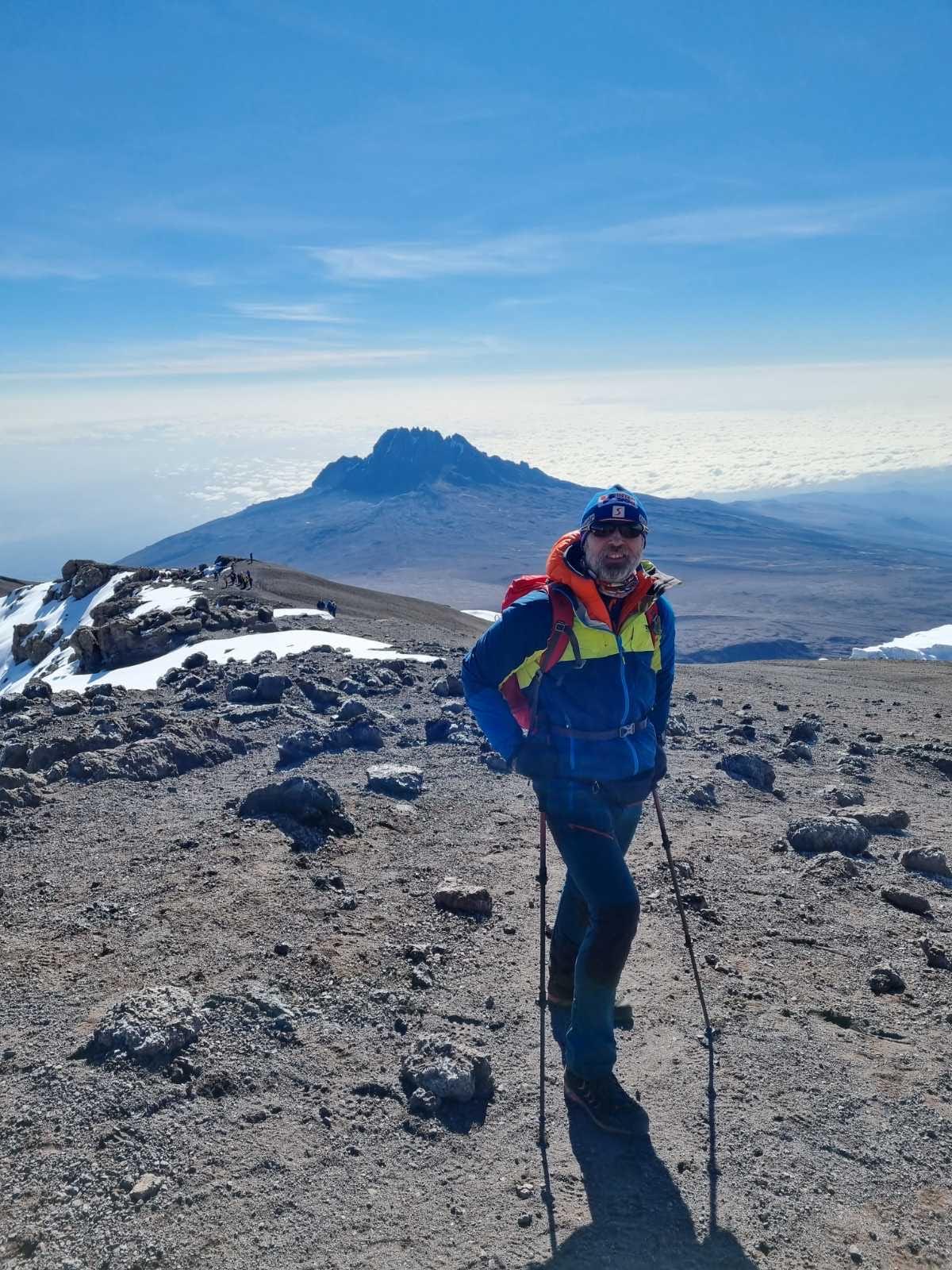 Luckily, our luggage arrived one day late. After retrieving it, we headed out to the national park. In the car park at the entrance to the national park we met the guides and porters who were going to help and support us to the peak. This was the first time someone was carrying some of my kit and gear for me so I was a bit embarrassed. I had always carried all my gear myself—in Alaska, I carried as much as 60 kg of my load on a sled and in a backpack. It was raining while we trekked through the tropical rainforest. After five hours, in the light of our headlamps we reached the first campsite, Mandara Hut Campsite, at an altitude of 2,720 metres.

The following morning after breakfast we continued to climb further towards Horombo Huts Campsite sitting at an altitude of 3,720 metres. As the path led us towards the top, we entered the steppe, and in the afternoon we reached our destination for the day. The trail turned into mostly-bare dirt trail with lots of rock, and there were several stream crossings on this stretch. A few team members were experiencing mild symptoms of high altitude sickness such as headache and loss of appetite. 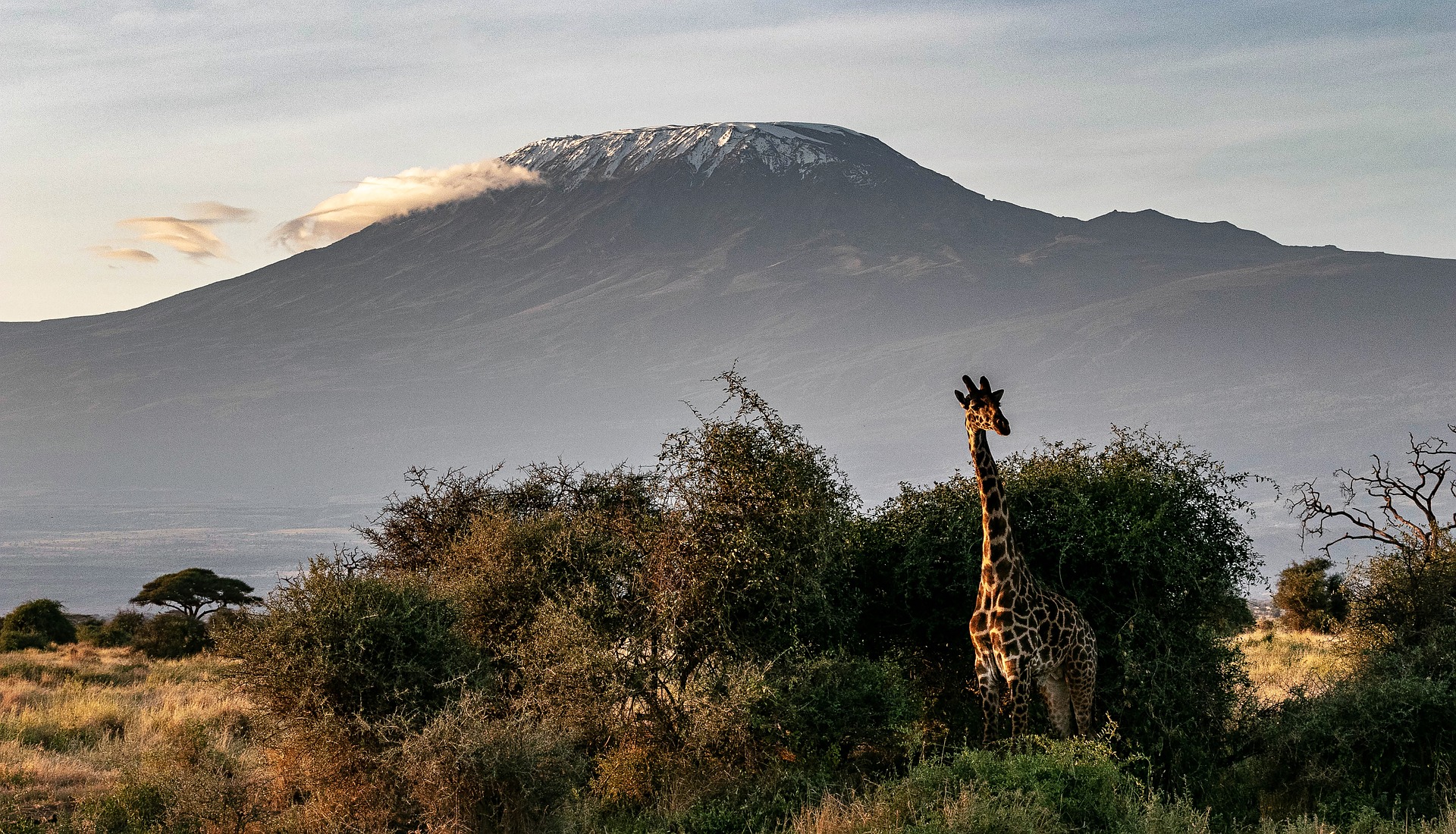 Our third day on the mountain was dedicated to adapting to the height. As planned, we reached the Zebra Rocks, located at 4,000 metres. It is an area with a set of large volcanic rocks and interesting plants. We then returned to Horombo Huts Campsite where we spent a pleasant time talking over dinner. We had medical doctors, engineers, economists, IT experts and other professionals in the team, but we were all united by a common passion for the mountains. The team was great and we all agreed that we were bound to succeed. The fact that there was poor or no mobile network coverage once we entered the national park meat that we were not able to access the internet and social media platforms, which is why it lifted our mood and helped strengthen our relationships. There is no hot water or electricity at the campsites on the way to the summit, so you need to bring a power bank or small foldable solar panels. The food is typical of the area—banana soup or eggs with white yolk. I would find it difficult to get used to these flavours and eat such food for extended periods of time. 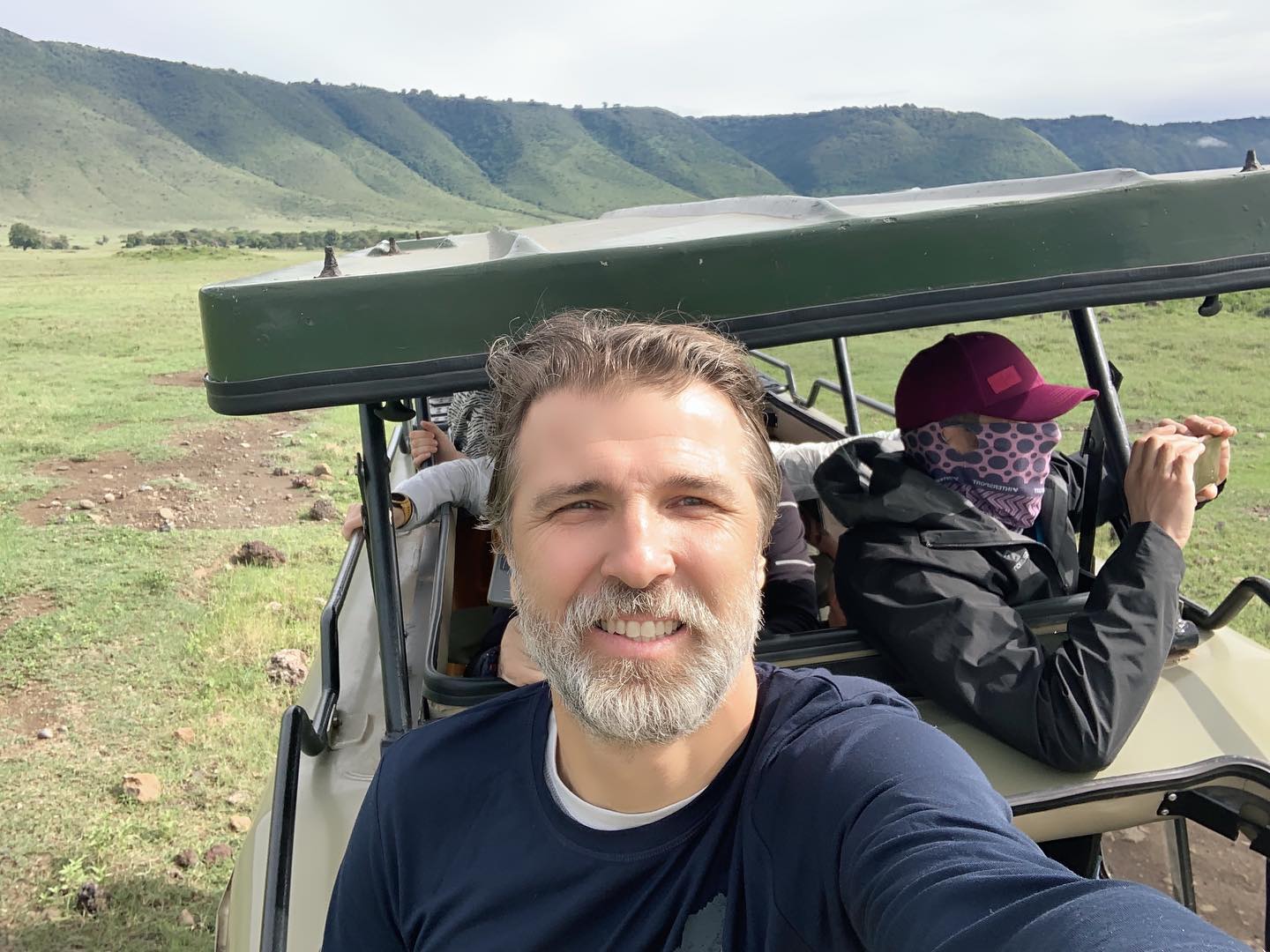 The ascent to Uhuru Peak begins at the Horombo Huts. As we moved through another climate—the alpine desert, green forests transitioned into the arid and rocky terrain of the heath zone. As we left Mavenzi Peak behind, in the distance we were able to see the side of the crater we would later climb. We did not walk any faster than Pole Pole, which is Swahili for slowly, because we were at an altitude that demanded respect.

At around two o’clock in the afternoon we arrived in Kibo, the last campsite at an altitude of 4,720 metres. After lunch, we had a brief meeting and rest before departure. The ascent to the top would start at midnight. In anticipation of departure, the majority of team members showed mild symptoms of altitude sickness and insomnia. Local guides were with us throughout the ascent, and to hear them happily sing the Hakuna Matata song (which means no problem) in unison made for the most memorable moment of all. The whole time on the way to the summit, particularly during the final ascent, we felt like we were a part of a team that had a higher purpose. 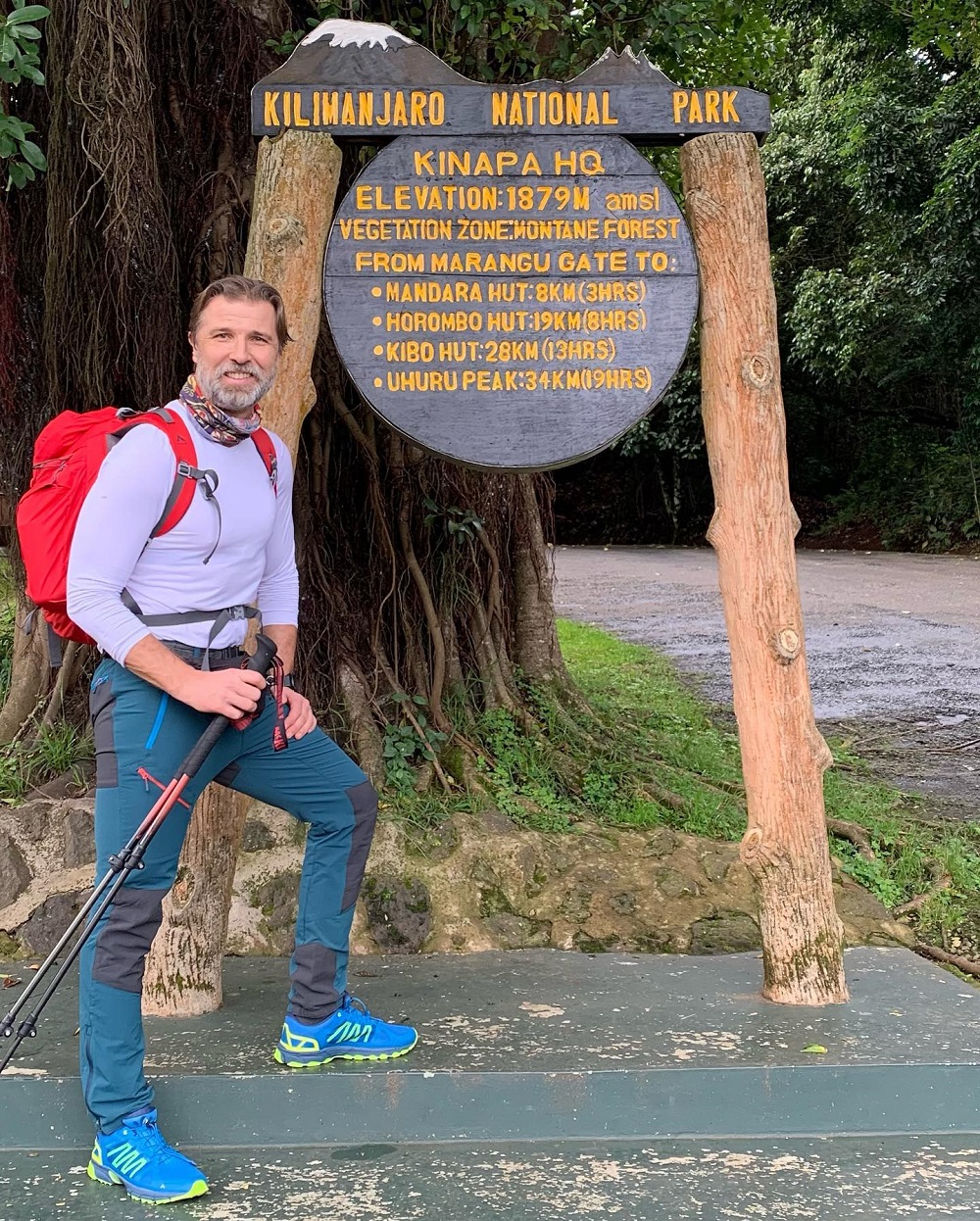 At midnight we gathered together at Kibo Hut and made the final preparations for the ascent. We climbed in a line, one after the other, slowly, putting one foot in front of the other, stopping for a break at areas with more rocks to shelter behind from the wind. Four hours later we stepped foot on Gilman’s Point, 5,756 metres into the sky. There, at the edge of the crater rim, we had a chance to see one of the most enchanting sunrises on the planet.

After we reached the edge of the crater, traversing around the rim to get to Uhuru Peak was much easier. In those moments, we enjoyed the well-known snows of Kilimanjaro and the highest peak of Africa that inspired Hemingway’s famous story, despite moving at a much slower pace with each step due to the altitude that was draining our strength, both physical and mental.

Glaciers on the southwest slope continue to resist climate change and stand in all their glory. After eight hours of climbing we finally summited the top of Africa. We stayed there for a short while and then began to descend. With each step it became easier do come down the mountain. Everyone was in good spirits when we returned to Kibo. We took a short break and then headed down to Horombo for dinner and overnight stay.

The morning in Horombo after the climb up was marked by a celebratory tradition full of merriment, dancing and singing of Hakuna matata songs. It was an opportunity for one last look at the mountain. The familiar landscape with low vegetation disappeared very quickly and in a few hours we descended to the Marangu Gate. The fact that we were completely soaked in the pouring rain did not bother anyone because we knew that our heart, the place where memories should kept, will hold the memory of Uhuru Peak safe.

The very next day we headed out on a two-day tour of the Ngorongoro Crater and Reserve were wild animals roam free. It was the perfect ending to our adventure trip. Within the crater, there is an incredible abundance of wildlife—antelope, giraffe, shy rhino, hippo, fearless lion and uninterested elephant all live here. We were already used to seeing baboons, so we held no particular interest in them. 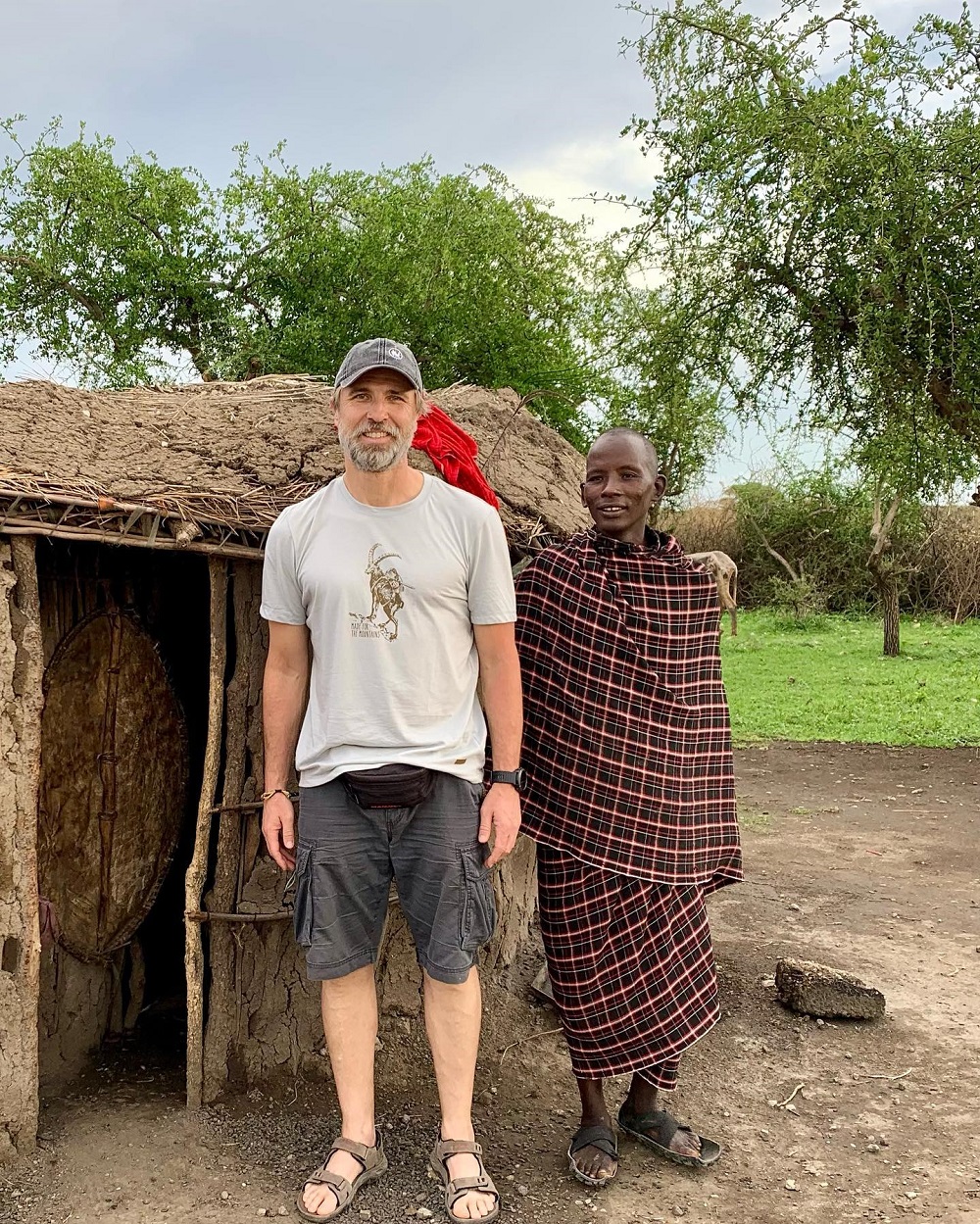 On the last day we attended workshops with the locals who make beautifully-crafted wooden sculptures and create tanzanite jewellery. We also visited an isolated village of the Maasai people who are still living in an authentic way. We then exchanged thoughts on our experiences.

The whole experience stirred up my deepest emotions. I know that I will be able to talk about Kilimanjaro for a long time.

“Anyone looking for a goal will remain empty when it will be reached, but whoever finds a way, will always carry the goal inside.”