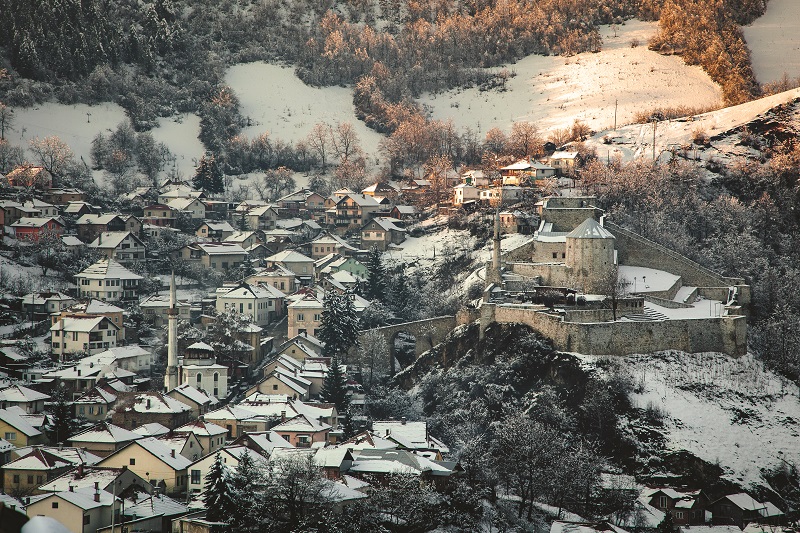 There is a house up above Lončarica and the cemetery. It appears as if it’s keeping the entire town under a close watch. I was thinking of how great it would be to get that house and watch what’s going on. It is for sale, but the price is so steep it feels like the owners don’t really want to part with it.

There’s an image you see as you enter Travnik. Some rocks, the meadow, the castle, minarets, the neighbourhood (mahala), the madrasah, the old town. As I remember, I came to Travnik for the first time from the west. Several years later, I entered the town from the east, which is only logical, given that Sarajevo, my starting point, is to the east from Travnik. I made an effort to try to remember if I have ever seen that image before.

I know, I was in Travnik and yet, I cannot believe that I forgot this image. In Bosnia, the most beautiful settings welcome visitors as they enter from the east or the south. It is as if the Turks were trying to make the arrival to the “Dark Dominion” more pleasant, to make sure that the first impression would last. To fool themselves and enjoy, if only briefly.

There are people in Travnik as well. The residents. They are difficult to describe. Whatever observation you make about them, it’s bound to be wrong. One striking feature shared by all citizens of Travnik is that they only have one “ć”, not two like the rest of us, who have to struggle to decide which one to use. People say Travnik is the town of the righteous ones and the executioners. On one side of the street the madrasah, on the other, the jail, so one must tread lightly.

Town neighbourhoods in Travnik are on the hills, either on the sunny or the shady side. The winter strikes both sides equally. When Vlašić meets Lašva and Hendek meets Plava voda, no sunshine’s strong enough to overpower the chill. The only real warmth is the one that comes from within.

The town has its fragrance too. To some, it’s the smell of “pitica”, a local variety of pita bread, which they like to compare with the smell of “somun”, but it’s really not the same. For others, it’s the hypnotising smell of “ćevapi” the high-fat Travnik variety of the popular dish. Again, these do not compare with anything else. There are those who think that it’s the smell of Vlašić cheese, referred to Travnik cheese in the entire world, but not in Travnik. To me, it’s the smell of the floor in “the Colourful Mosque” (Šarena džamija). I cannot tell if it comes from the wooden floor, or the carpets or the light or all of it, combined. This heart-warming fragrance is especially strong during winter.

There’s a chronicle as well. It is an ongoing feat, one never stops reading it, but also never stops writing it. I don’t really recall the point in time when I became a part of Travnik Chronicle, but it dawned to me one fall as I finished my morning prayer and was greeted by an unknown man on my way from the “Colourful Mosque”, who approached me with warm: “As-salamu alaykum, how are you, how’s the family”, and disappeared behind the tinted glass of bakery door, probably to get fresh bread rolls. I answered briefly and directly, without hesitation; when in Travnik, I try not to act smart. I prefer to listen. I appear wiser that way too.

There is a house up above Lončarica and the cemetery. It appears as if it’s keeping the entire town under a close watch. I was thinking of how great it would be to get that house and watch what’s going on. It is for sale, but the price is so steep it feels like the owners don’t really want to part with it. Not everyone can keep this town under watch. No need for it either.

There is only one who keeps it under watch. The town, the water, the mahala, the righteous ones and the executioners and the travellers. On their way in and out.