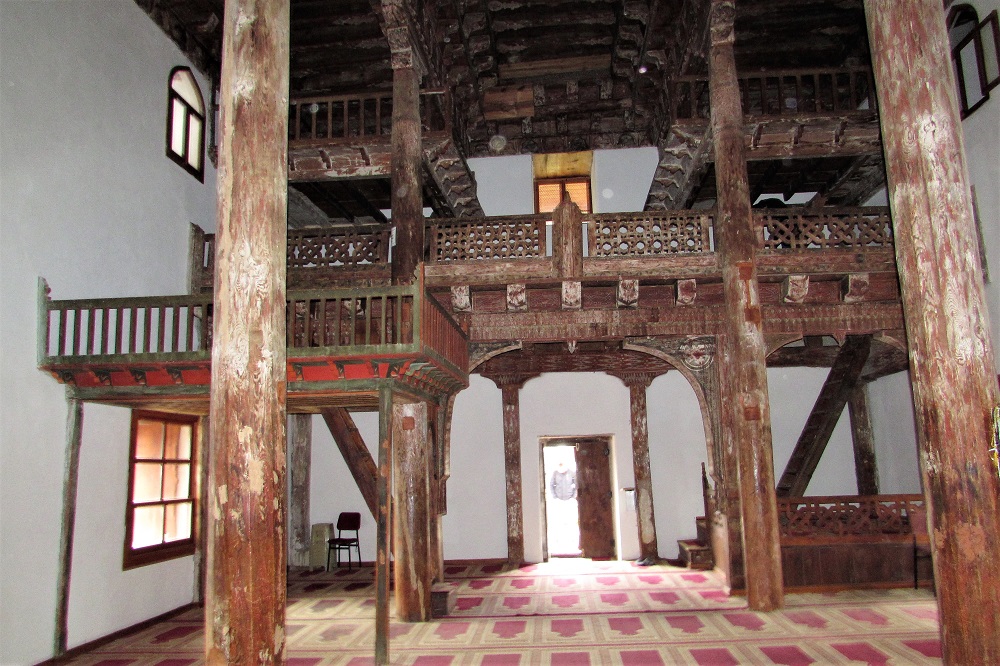 Mahmut Bey Mosque in Kastamonu is one of the first mosques with wooden columns and a wooden roof in Anatolia. Its interior is entirely made of wood, no cement or metal was used in its construction, and it is perfectly representative of this rare architectural technique called kündekari. The mosque is inscribed on the UNESCO Tentative List of World Heritage Sites.

Mahmut Bey Mosque was built at the time of Candaroglu principalities (Candaroğlu Beyliği). Sultan of Candaroglu Emir Mahmut Bey had it built for Friday prayer. The mosque is located in Kasaba Village, 20 km away from Kastamonu’s city center. It dates back to 1366 and is famed as one of the most unique buildings not just in Kastamonu but in Turkey in general.

Even though its outward appearance is plain and simple, its interior is full of wonderful and vivid wooden ornaments, it has an ornamented wooden ceiling, wooden floors, columns, a minbar (a pulpit in the mosque where an imam stands to deliver sermons), a beautifully carved double-wing wooden door and a magnificent mihrab (the place where an imam leads a congregation in prayer).

All the paint colors, from orange to ruby red, blue and yellow, are plant-based and despite the centuries that have passed they still adorn the wooden furniture and the beautiful roof.

Beautiful woodwork and ornaments of Mahmut Bey Mosque are well-known throughout the world, and the whole place is reminiscent of its brilliant history. The mosque is an absolute must-see for any visitor to Kastamonu, and people around the world think it is an architectural masterpiece.