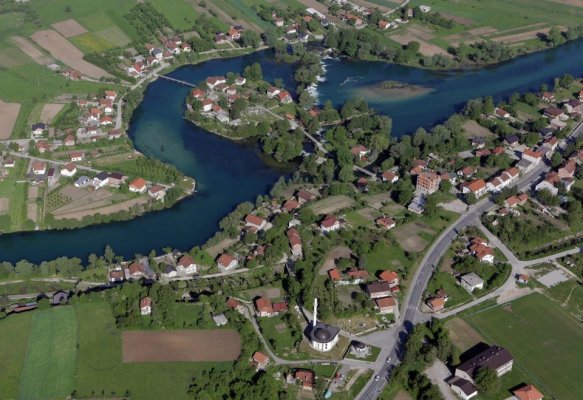 Waking Up by the Una

Bihać always seemed to be far away. At least the distance always seemed pretty daunting. However, the distance has never made it remote. Once you visit the first time, it grows on you and you get an impression that you presence remains there, long after you’re gone.

There is something special about towns you reach after a long and arduous journey through what seems like nothing. Even what seems like nothing at first, becomes remarkable in a way, after a while. After a while, you get to understand the purpose of ascend through the woods of Lanište and appreciate the strange appeal of sinkholes, which stubbornly harbour the very last remnants of the show till late in the spring, when the sun finally decides to melt it as if trying to teach it a lesson. Endless pastures paint the scenery in bright colours of luscious green, only to become replaced by steep descend down the narrowing passage, which culminates in the stunning scene of the first sighting of the Una. At that spot where you see it for the first time, it appears peaceful, giving away no more than a soft murmur now and then, as if it grew weary along the way. No wonder the mighty river seems that way; it just surmounted the falls of Martin Brod and Strbački Buk. As it glides through the town, its power softens as if the river is trying to take it easy and let your senses absorb the green silken beauty of its hypnotising course.

Perhaps you say Bihać and immediately think of the Una. Perhaps you say Bihać and think of its residents and the affirmative phrase “pa da” (well, yes) everyone seems to keep repeating. They pursue education outside their home town, but once they graduate, they are the first to come back. They flee into their secluded and remote town. They remain remote in terms of distance only, not in terms of the feelings. They display genuine hospitality and warmth to well-intentioned visitors, those of the other kind will be sure to experience the harsh resolve they are also known for.

You may say Bihać and think of the old bastion, the remnant of the turbulent past. I wonder who would have ventured to surmount it knowing that the crossed sons of Krajina were waiting impatiently on the other side. Or perhaps the first image that comes to your mind is the mosque in which people offer prayers while standing “sideways”. The builder never intended it to be a mosque, but some things cannot be planned for, or drawn, or designed. I don’t know if there is another one quite like it anywhere in Bosnia or the Balkan Peninsula for that matter.

In the middle of the Una, in downtown Bihać, a small river island called Otoka has a story to tell. It was and still is the most popular venue of countless parties, going on until late into the night. Countless concerts took place there too. The events are particularly frequent during the Regatta when the contestants rest after having completed the long and strenuous second stage, the most beautiful and the most difficult of all. Those who have never experienced it have nothing but regret and irresistible desire to do it. Those who have experienced it, are guaranteed to come back for more. Combined, the mouth-watering aroma of meat roast and mild and appetizing fragrance of fried trout appeal to the senses and attract the hungry. I still cannot decide which trout I like better, the Una trout or the Buna trout. It just seems like an impossible choice for me. Objective or not, honest or not, the answer keeps eluding me. Finally, I give up. I just enjoy not thinking about it anymore. Not looking to pick a fight, I just surrender to the soothing pleasure of my meal and try to savour it for as long as I can.

When the winter comes, Krajina seems desolate and on its own. The snow makes the distance seem even longer. The height of the snow seems to signal desire for peace, serenity and seclusion. Where the snow is not deep, the wind sure is harsh, blowing ruthlessly as it carries the snowflakes that never managed to land someplace safe. The winter scenery seems surreal. It appears as if the snowflakes are not floating downward, but rather in an upward course, as if they are trying to return to the sky above, or at least, land somewhere else, carried by the wind like mysterious white dust.

In downtown Bihać, fragrant aroma of roasted chestnuts fills the streets. Surely such succulent chestnuts can only come from Cazin or Bužim. They smell delicious, they stain the fingers and lips, but you struggle to stop. You find yourself devoid of any real willpower, and while you are at it, you should enjoy it as you wait for the spring to come to expand your chest and open up your eyes in glorious triumph of the new awakening.

Imagine opening your eyes one morning and seeing the small waterfalls below the Otoka Island. You see them first and in a moment, you hear their soft hum. You then crawl back to bed. There is but one place with such a view, such a sound and such a bed. It is not that far away, but even if it was, one such morning makes all the difference in the world. It makes it feel as if your presence remains there, lingering quietly, long after you’re gone.