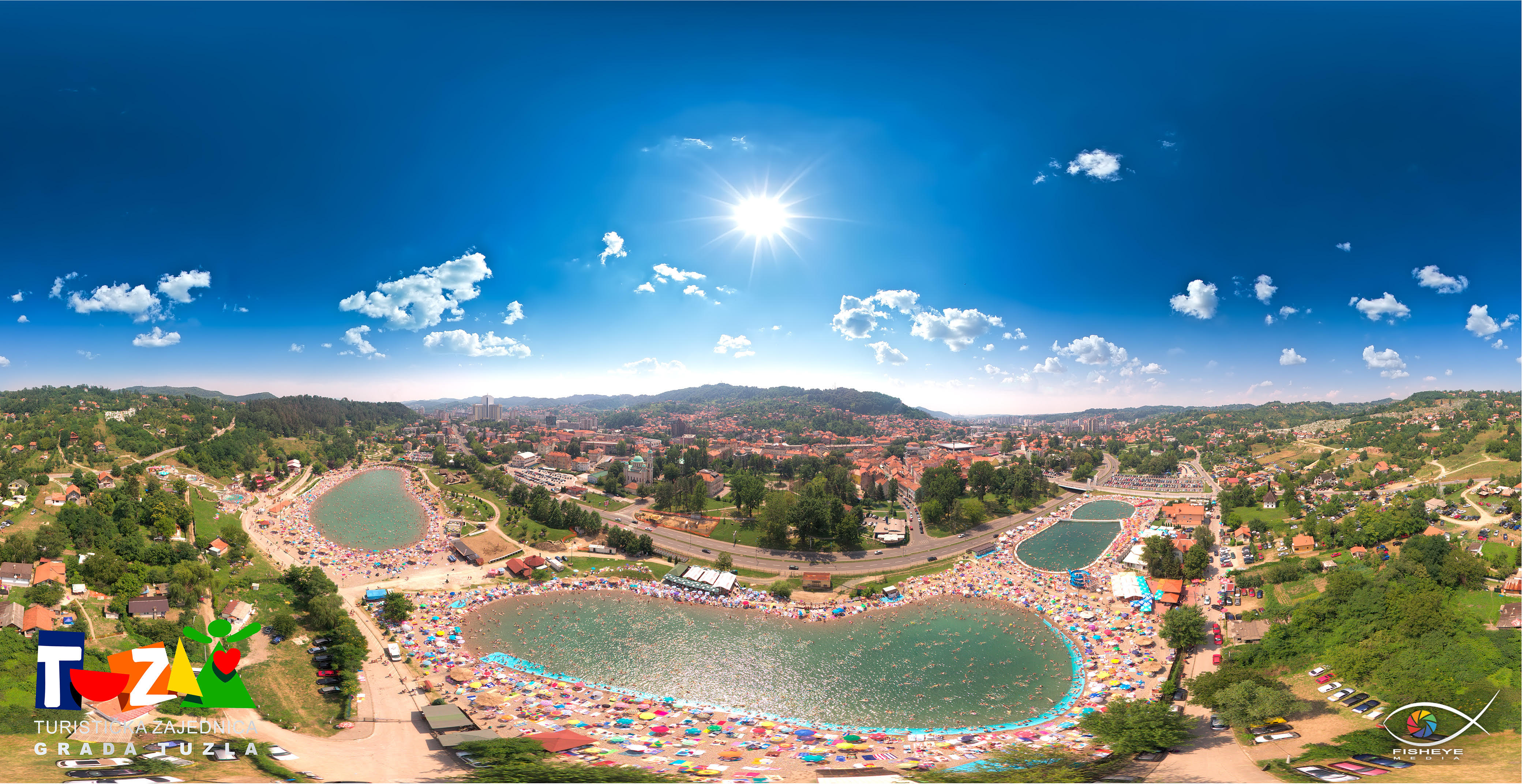 #1 A city with a rich history

For all those who love history, a visit to the City on a Grain of Salt, as Tuzla is also referred to, is an excellent choice! The deposit of salt determined the fate of this city, which nestled on the tame mountain slopes of Majevica. In the beginning, it was a lake-dwelling settlement from the Neolithic (last division of the Stone Age), and through prehistoric and historic times there was life here, making Tuzla one of the oldest settlements in Europe with a continuity of living.

Today, this is a city where you will be greeted by lovely hosts who are hospitable unlike anyone you have met before, and the city will delight you with numerous tourist attractions, rich cultural sights and entertainment.

A salt oasis and unique place for swimming and relaxation during hot summer days, the only place like it in Europe is right here in Tuzla. A combination of natural resources, human ideas and hands, created a complex of salt lakes where the water contains minerals, and as such will have a healing effect on your body. Within the complex, which has been visited by 4 million tourists over the last 16 years, you can also visit the Arheološki Park- neolitsko sojeničko naselje and Geološki Muzej (Archaeological Park – the Neolithic lake-dwelling settlement and the Geological Museum).

Due to the construction of the Pannonian Lakes, the City of Tuzla was awarded with the greatest accolade of the United Nations Word Tourism Organization (2012 UNWTO ULYSSES AWARD) for the project Valorization of Natural Heritage – Pannonian Salt Lakes in Tuzla, which is awarded for innovations in the field of tourism.

The complex of the Pannonian Lakes continues onto the sports and recreation complex of Slana Banja (Salt Spa), which is one of the most spacious and well-maintained central parks in B&H. Apart from hiking and running trails, it also consists of a complex of tennis courts, futsal and basketball courts, and memorials for heroes and victims of World War II, and the defenders from the war of 1992-1995, and the civilian victims of the war, i.e. the Tuzla youth that were killed at the Kapija on May 25 ,1995. Within the Slana Banja (Salt Spa) there is also the Kuća Plamena Mira (House of the Flame of Peace), which is intended for young people and activities related to their creative initiatives and ideas.

If you head out for an evening walk along Tuzla, you will notice the youth that gather at the Trg Slobode (Freedom Square), the largest square in B&H, where along with the music from nearby cafes, it is lively until the morning hours. Trg Slobode is a place where there are cultural and historical monuments from almost every historical period. Along with a coffee, tasty sweets and the murmur of the fountain, you will have a great time here. The tourist offer of the city is also enriched by the Solni Trg (Salt Square), and the central spot at Solni Trg is the fountain, a gift from the city of Ravenna, built in the shape of a stylized Neolithic dish for boiling salt. Around these city squares, there are dozens of narrow, granite-paved streets, always full of life and youth.

#5 Kapija, the symbol of the city

The Kapija square represents one of the most significant symbols of Tuzla. On May 25, 1995 a terrible massacre occurred here, where as a result of shelling 71 people were killed, and over 150 were wounded. In memory of the victims of the massacre, there is a memorial plaque at Kapija with the following verses of Mak Dizdar “You do not live here just for the sake of living, you do not live here in order to die, here you also die in order to live”.

When it comes to food, one thing is certain – Tuzla is a real gourmet heaven! The cuisine in Tuzla is diverse and satisfies all tastes. At every corner, there are restaurants and establishments with smells of traditional Bosnian dishes wafting through the air which you will not be able to resist! This is a city that thinks of everyone, so vegans and vegetarians from Tuzla will leave satiated and content.

For all those who love seeing places of worship, Tuzla has a lot to offer. When it comes to monuments of Islamic tradition, there are several old, very pretty mosques in Tuzla, such as the Poljska (Turalibegova), and Šarena, Čaršijska, Jalska, Džindijska, Mejdanska and Brđanska mosques. You can also visit the Franjevački samostan and Crkva sv. Petra i Pavla (Franciscan monastery and Church of St. Peter and Paul), and there is also the Orthodox Church Crkva Uspenja Presvete Bogorodice (Cathedral of the Dormition of the Virgin) nearby from 1874. In Srednja Lipnica, there is the Kapela Gospe Lipničke (Chapel of Lady Lipnička) from the 17th century, where there is a painting of the Blessed Virgin Mary, which people in that region believe to possess miraculous powers.

If you would like to sail into the past for a moment to feel how people used to live or discover something more about the cultural values and tradition of the people who live in Tuzla and the rest of  northeastern Bosnia, we recommend a visit to the Muzej Istočne Bosne Tuzle (Museum of Eastern Bosnia Tuzla). In addition, we recommend that you also visit the Muzej Soli (Museum of Salt), which is located within the company Solana Tuzla. It is also worth seeing the Međunarodna Galerija Portreta Tuzla (International Gallery of Portraits Tuzla), the Međunarodni Atelje (International Atelier) Ismet Mujezinović, as well as the Dom Književnosti (House of Literature).

If you are wondering which significant monument you should stand be photographed next to in order to memorize Tuzla, we suggest that you head towards the Gradski Park (City Park), where the central area holds a monument for the first Bosnian king Tvrtko I Kotromanić.

Apart from that, at the Tuzla Korzo (promenade) you must pose next to the monument dedicated to Tuzla greats Ismet Mujezinović and Meša Selimović.

In order to see Tuzla and the attractions mentioned in this article in the easiest way, we recommend a ride on the tourist train, which consists of a locomotive and two adjoining parts with a capacity of 36 seats. During the ride, you will get to know the sights of the city through a historical description of all the important details.