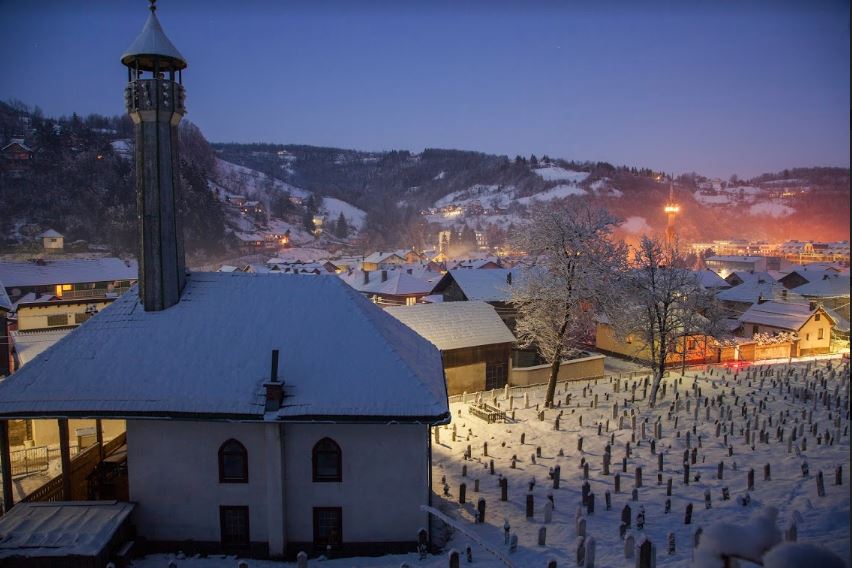 Several centuries ago, a local from this town, Mustafa sin Hadr, ordered Atik Mosque to be built. Mahala, or the small neighborhood in which this mosque is located, is named Hadrovići after him. He donated most of his property in favor of a waqf (Islamic endowment of property to be held in trust and used for a charitable or religious purpose), so that this place of worship could always be open to people of faith and regularly maintained.

Atik Mosque is small in size – 6,9 x 7,5 meters. It is nested in a small courtyard, and it is the first Islamic place of worship built for the needs of the first Muslims who settled in this area. It is interesting that the mosque’s original visual appearance has been almost completely preserved despite how much time has passed since it was built.

The mosque was set on fire, but it was not completely burnt to the ground. After the unfortunate event, the local inhabitants found scripture that is followed by Muslims in one of the mosque’s walls, a centuries-old handwritten Qur’an. Later on, we came to know that the attic also hid valuable manuscripts in the Ottoman, Turkish and Persian language that stood the test of time, including the Arabic-Turkish dictionary that would be difficult to find at any other place, and the Bejdavi tafseer (explanation and clarification of the Holy Book).

A lot of people from Fojnica frequent Atik Mosque, particularly during Ramadan. According to a folk story, the mosque is also known by the name of Maidens’ Mosque. A tale of three beautiful maidens that decided to give away their dowry, a large cloth, for the mosque’s restoration because they never married, is the reason why women’s Qur’an recitations, known as muqabala, are regularly held at Atik Mosque during the holy month of fasting.

Four candlesticks, which are also part of the waqf, as well as the cannons that were used to signal the time of prayer and iftar, the breaking of the fast, are kept in the mosque.