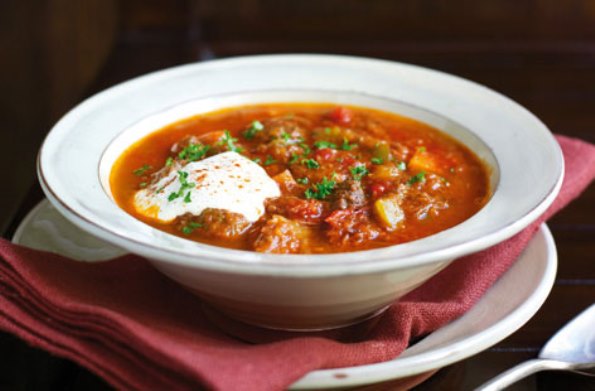 Chestnuts belong to the group of foodstuff with valuable nutrition profile.  Since it is excellent source of fibre, rich source of vitamins and free from gluten, it is one of the popular ingredients in the preparation of gluten-free food which has an increasing number of followers

Boiled or baked, chestnuts are very delicious when prepared as a main course or they can be prepared as pureed food  in soups or used as stuffing in various desserts or dishes.

Score each chestnut on the top with a knife and boil in salty water around 15 minutes. Pour them over with the cold water, peel away the hard outer shell and boil again for another 15 minutes. Drain chestnuts, peel away the softer inner brown skin as much as you can, but try to preserve the full fruits. Fry chopped meat on heated oil. Cube onions, add meat and cook on medium heat until it tenders. Season with salt and pepper and let it cook, adding little water occasionally. When meat tenders, add chestnuts, stir, add raisins or apricots and cook until the liquid evaporates and leaves small amount of the sauce at the bottom. You can serve the dish as a main course or with a topping.

In addition to its famous landmarks and attractions admired by