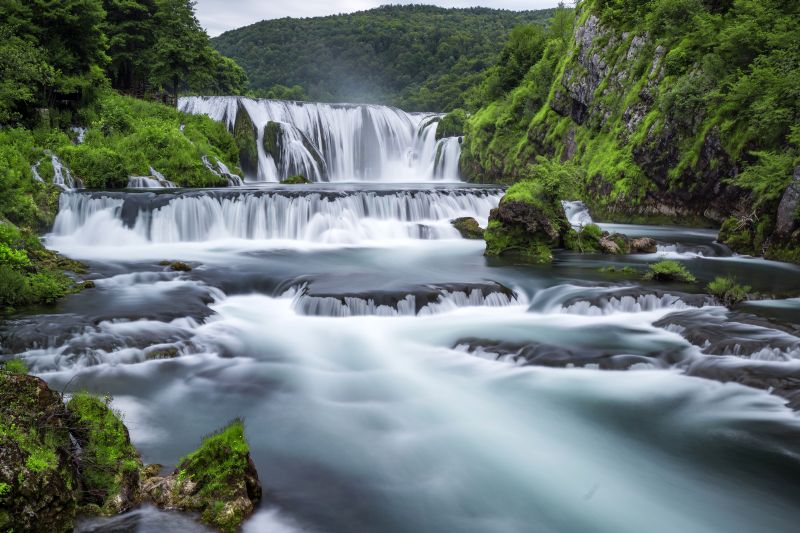 In the summer of 2020 the mind-blowing natural landscapes of Una National Park were a true discovery for a large number of Bosnians and Herzegovinians. As they explored the country, they came to realise that some of the most scenic locations in our country are not to be missed.

In the tourism world, Una National Park has become a recognised brand, even in the first year of the coronavirus outbreak, receiving a Recognition for Successful and Responsible Business. The regional market recognised how valuable it is, so “Una” National park is among the nine recipients of the prestigious “Tourism PRISM” award in the “Eco and Ethno Tourism” category. The Una River is truly wonderful, but the way park employees cherish it is even more wonderful. Each spring for almost a decade now they organise an environmental clean-up event called “Just a little good will”, as part of the ongoing effort by the City of Bihać to clean the entire area covered by the National Park—from the riverbanks to the riverbed. Because of its care for the environment, Una National Park also received the “Champions of Environmental Protection Award, B&H Green Awards 2021” in the business category.

The Two Most Gorgeous Waterfalls in B&H

Una National Park is home to two of the ten most gorgeous waterfalls in Bosnia and Herzegovina and Europe. One of them is the stunning 24-metre Štrbački buk located just before the first larger Una River canyon. This natural pearl is now easier to reach, because the 5.2-kilometre road leading to Štrbački buk has recently been modernised and asphalted. Una National Park employees have worked diligently to prepare it for the season so a water supply system was constructed and a rainwater drainage system was completed. If you decide to cycle to Štrbački buk, “Recro Bike Station” allows you to use the basic tools to fix your bike, a solar-powered air compressor to inflate your tires, and a USB charger to charge your mobile phone batteries. You must also seize the opportunity to visit the waterfalls in Martin Brod which were inscribed on the UNESCO Tentative List for Bosnia and Herzegovina!

Each summer, Bihać is the centre of the world. That is how its visitors feel in the summer season because it hosts a multitude of events and activities that make hot summer days fly by. This year will be not be any different. In addition to the regular activities, film enthusiasts will once again be able to watch some great film screenings from boats on the Una River as part of the 3rd “Avant & Una“ film festival scheduled to take place on 20th – 25th August. The management of Una National Park decided to enrich this year’s programme by adding a scientific and educational adventure to it—a documentary author film “In the Footsteps of a Bear Called Ljutoč BH 001”.

This summer, a Mother Tongue and Culture Summer School called “Let’s Speak Our Language” will be held in Bihać on two occasions: on 26th – 30th July and then on 9th – 13th August. The aim is to promote and affirm Bosnian and Herzegovinian language and culture among young people in the diaspora between the ages of 11 and 18. In addition to classes, i.e. learning the language and discovering more about the culture and local and national history, students will also have a chance to enjoy the natural scenery and tourist potentials in the City of Bihać.

Bringing Back to Life the Old Town of Ostrovica

Thanks to the people of Kulen Vakuf, and with the support from Una National Park, the old town of Ostrovica—which was built by the Amazon women of Bosnia, according to a legend—will get street lights. The management of Una National Park plans to build a cable car to connect Kulen Vakuf and Ostrovica, a medieval town and a national monument of B&H. It is set to become a tourist attraction of the area.