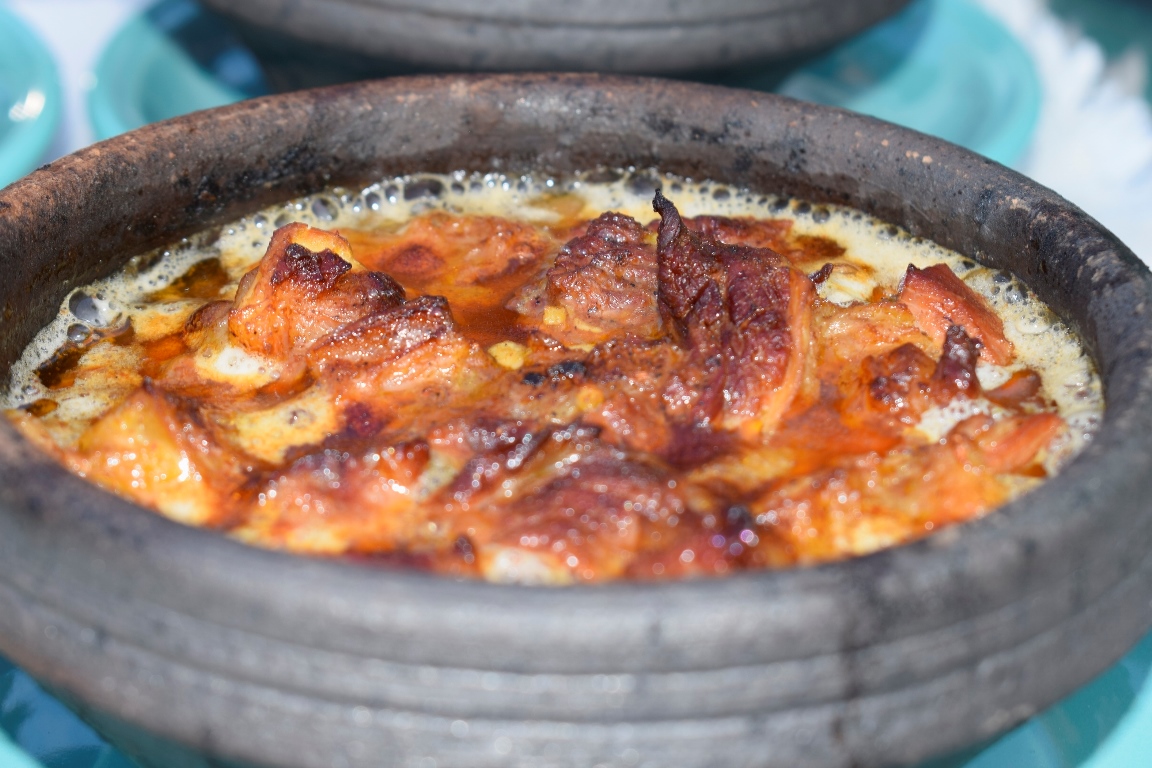 They say that puračka ćaska is more than a dish. The people of Puračić believe it is a way of life. The dish is cooked slowly, without any rush, in an earthen pot to keep it warm longer. You also eat it slowly, without haste, because this allows you to smell and taste all the flavours in the food with more intensity that you could otherwise.

Puračka ćaska is a traditional culinary delicacy in Puračić, a small Bosnian town right outside of Lukavac near the city of Tuzla. It is a meat dish seasoned with various herbs and spices and baked in ćasa or an earthen pot, the so called ćaska, or a small earthen pot, after which the dish was named. On special occasions, people put off whatever they are doing to focus on baking ćaska. It is a habit from long ago when Puračić was a trading centre and when a large number of well-to-do families was able to afford a meat-only dish. It was a busy time for the local butchers, aščije (chefs running food establishments that serve traditional Bosnian dishes) and bakers back then because they baked ćaska and lepine (traditional soft and fluffy flatbread), which were served with this dish, in their ovens. Pottery was a successful business too as mass quantities of earthen pots were being sold. Such earthen pots “can now only be sold in Puračić”. Ćaska was regularly made in Wednesday, ahead of the market day in Puračić, and especially in the run-up to the annual fair which was and still is one of the largest traditional events in Bosnia and Herzegovina.

Scent of Freshly-baked Ćaska in Čaršija

There is no written record to show when this culinary delicacy was served for the first time in Puračić. Elderly residents who are approaching 100 years of age remember that it was served when they were little. They remember, they say, that they could always feel the scent of freshly-baked ćaska in čaršija (the town’s commercial area) when passing by any of the bakeries operating at the time. However, it dates back to the Ottoman era when Puračić began to develop as a commercial centre with many different shops and craftsmen’s shops. Meat trading, pottery manufacturing, trading in goods and food catering were among the major industries at the time. That period also saw the beginning of weekly and yearly markets or fairs where merchants and customers from around the country and from abroad would gather in great numbers.

The Art of Preparing and Serving the Dish

Over time, the recipe for puračka ćaska was passed down from generation to generation. Each family in town had its own secrets as to the type of meat and the ratio of herbs and spices to use to enhance the flavour of the dish. Fatty cuts of young beef from the forequarter are the primary ingredients. Other ingredients are onion, garlic, and various herbs and spices. To make puračka ćaska, place thinly sliced onion and garlic, dry herbs and spices, pepper and a laurel leaf in an earthen pot, and then add meat cut in cubes of a mouthful size. Then place a whole garlic bulb in the middle of the pot, season with salt and add enough water to cover the meat. Place the pot on the stove and bring the mixture to a boil. Reduce the temperature, or move the pot to the side of the stove, to simmer on a low heat setting. When it is nearly done, add cloves (to taste). Cook until the meat is done, and then transfer the pot into the oven to bake until the meat is golden-brown and crisp on top. It takes several hours to make puračka ćaska, and the longer it simmers, the tastier it gets. When made at home, it is cooked in an earthen pot. Small pots called ćaska (or ćaske for plural) are heated to a boiling point so the dish can be served while it is still boiling. It is eaten along with baked flatbread or lepina. Hot peppers (cayenne peppers) may be added for better flavour.

“The Art of Preparing and Serving Puračka Ćaska” was added as the fourteenth element on the Intangible Cultural Heritage List of the Federation of Bosnia and Herzegovina, which is part of Bosnia and Herzegovina Open Preliminary Cultural Heritage List. This was made possible thanks to the Culture and Art Association “Puračić”. This is the first culinary delicacy to be inscribed on this list. It is called preliminary because it is a step forward in being inscribed on the UNESCO Representative List of the Intangible Cultural Heritage of Humanity, which contains only four elements of intangible cultural heritage.

Each year, Puračić hosts a culinary event known as “Puračko ćaskanje”. It is both a social gathering and a cooking competition in which participants compete in an attempt to make the best ćaska. It is also the venue of the International Folklore Festival “Dani ćaske” (Days of ćaska). It is a recognised as CIOFF festival and includes a gastro festival featuring traditional dishes the people of Puračić are particularly proud of. Their unique recipes were compiled in a cookbook called “Puračka sofra” (sofra is a family gathering around the dining table and as well as the dining table) revolving around puračka ćaska.