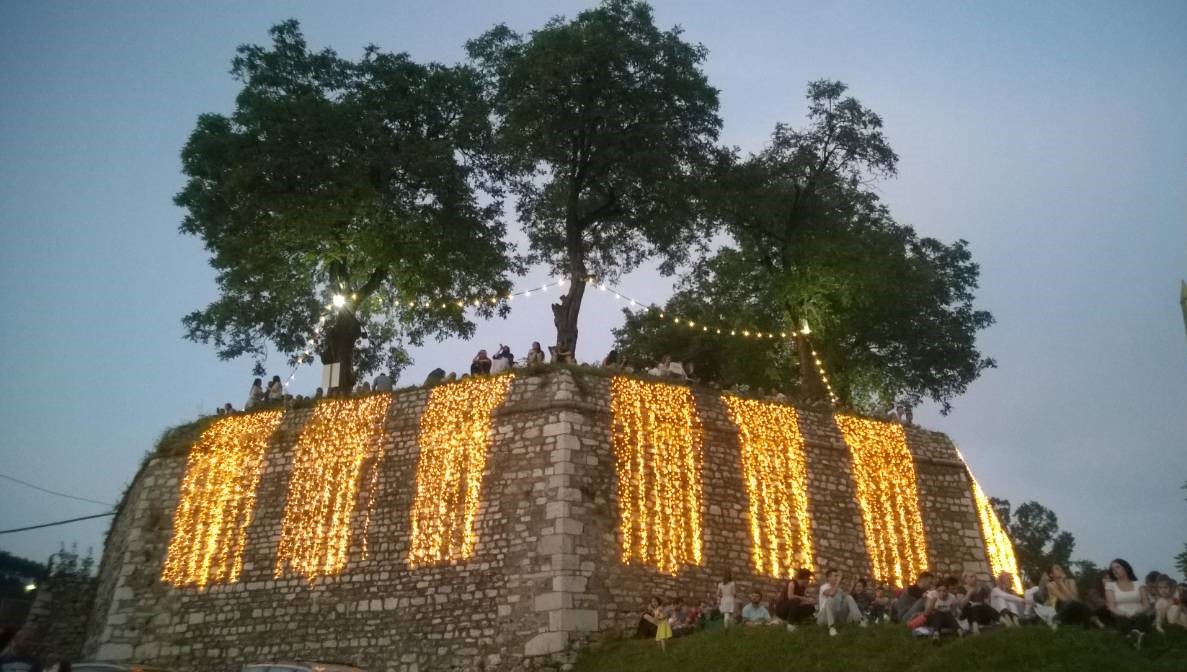 Ramadan Magic at the Yellow Fortress

In the capital of Bosnia and Herzegovina, the sunrises are the prettiest during Ramadan, along with suhoor at čaršija and the Fajr prayer in one of Sarajevo’s mosques, and iftar beneath the sky with Sarajevo on the palm of your hand has become a tradition not just for Sarajevans, but for all Bosnians and Herzegovinians, as well as tourists from all over the world.

In a city where the cultures of the East and the West merge, everything has a special charm, and that is also the case with the month of Ramadan when Muslims give up food, drink, and other bodily pleasures from sunrise until sunset. It is a month of blessings, God’s grace, forgiveness, protection and light, which spreads through the souls of worshippers. A special kind of happiness enters the homes of worshippers, and the city smells of the tastiest Bosnian dishes. And Sarajevo’s bakeries, especially the ones at Baščaršija, Alifakovac and Bistrik, complete the Ramadan atmosphere with the smell of somun (flat bread). It is the kind of beauty that you cannot fully experience in other places.

A real attraction during Ramadan is the Yellow Fortress where Sarajevans, and many tourists, come to enjoy the blessings of Ramadan, and the magnificent view of the city. The fortress is located on Jekovac cliff, which is why it is also known as Jekovačka Fortress, and it is one of the forts which served as a defensive rampart around the old town of Vratnik. It is built out of roughly cut stone, with seven outer walls that are 10 meters tall, while the eighth one, which faces the north, is 27.5 meters tall. On the north side, there are steps and a space constructed for soldiers, and on the southwest side there is a Muslim cemetery.

Even though it is popular all year round, during Ramadan, it is the most popular spot in Sarajevo. This is the place where, during the Ottoman Empire, the tradition of cannon firing started, in order to signify the end of the fasting period during Maghrib. The tradition was maintained during the Austro-Hungarian period, then forbidden during former Yugoslavia, but due to his love of this tradition, Sarajevan cannoneer Smajil Krivić revived it back in 1997. Cannoneer Krivić has been coming to the Yellow Fortress regularly during Ramadan 20 minutes prior to iftar time in order to prepare and check that everything is in place. Once the cannon tube, gunpowder, wicks and lighters are ready, he looks at his watch and waits for the right time. Then, you can hear a bang and you can see the shape of a flashing rose in the sky above Sarajevo, the lights come on in mosques and to the great joy of those who fast, iftar begins.

After that, you hear the sound of spoons and glasses of those who are breaking their long fast. Pre-prepared food or food bought at the Fortress, a blanket and good mood is all visitors need for an unforgettable Ramadan experience. Those who do not fast should still come here, to experience the uniqueness of the panorama, the socializing, magical smells and food.

After a pleasant meal and a Bosnian coffee with a view of the lights of Sarajevo, one can take a leisurely stroll down Kovači to go into town until it is prayer time. Then, the mosques and harems are filled with people who are in search of a spot for the Isha prayer, and then the Tarawih prayer. Tourists who visit Sarajevo during Ramadan, watch with great fascination as people perform the nighttime prayer, which attracts many worshippers to the mosques of Sarajevo.

After prayer-time, a river of people spills out at Ferhadija and Sarači streets, in search of a place to have coffee with their friends. At that time, the čaršija fully comes to life, and it is hard to find an available seat at cafes. That is how Sarajevo lives until the morning hours during Ramadan, until suhoor time. Many establishments in Sarajevo are open, adjusting their opening hours during this special month.

During Ramadan, life takes on another dimension and a new rhythm. People visit their families and friends, and eat together and socialize, and what attracts visitors and admiration from those who find themselves in Sarajevo during the holy month is the diversity of customs and religions, multiculturalism and tolerance, which is visible at every step.

Over the last few years, Ramadan has taken place during the peak tourist season, and a lot of related activities take place at this time. The Sarajevo Ramadan Festival is held as well, and apart from at the Yellow Fortress, some events are also held across several locations in the city. Everyone can find something for themselves in this city!