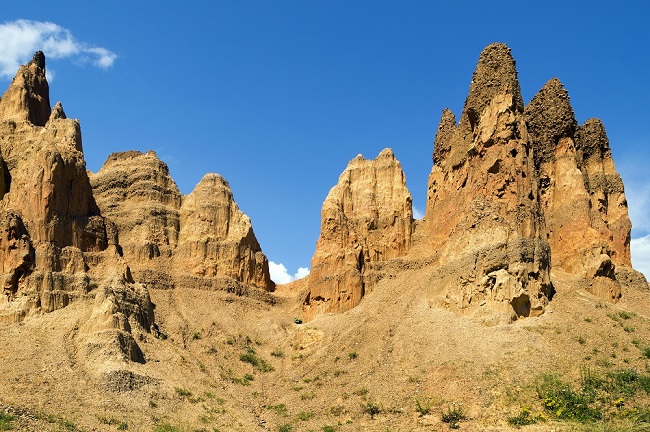 Only nine kilometers from Foča, in Pirin Do, there is a unique natural phenomenon – sand pyramids. They were formed by many years of soil erosion and the joint influence of aggressive frost, summer heat, rain and strong winds.

Pyramids that are over 200 years old, sited by the old road that once connected Foča and Sarajevo, have only in recent years awakened the interest of both the local population and foreign tourists whose number is increasing.

Furrowed sand columns rise from their broad foundations and narrow towards the top, and thus form an extraordinary geomorphological rarity in this region. The process of erosion continues today, and, contrary to expectations, the columns do not disappear but grow. For now they reach a height of up to 20 m.

Those who have visited this place could say that they have come across unusual beauty. A similar natural phenomenon occurs in other parts of the world, so many call the sand pyramids near Foča “Bosnian Colorado”, because they resemble the ones in Colorado in the United States. In fact, they are difficult to compare, as they are different in size and composition, and what makes them more attractive and stand out more is the greenery that surrounds them. If you climb the pyramids and look around – the endless green, magical plateaus and mountain peaks will leave you breathless. Although not sufficiently promoted, the sand pyramids have more and more visitors each year.

The marking of a 20 km cycling trail was recently completed, connecting the town of Foča with the pyramids. Over twenty signposts were put up to ensure that those who are here for the first time will not go in the wrong direction. Unfortunately, visitors still don’t have the opportunity to stop at this point to make a break and freshen up, because catering facilities have not been built yet.