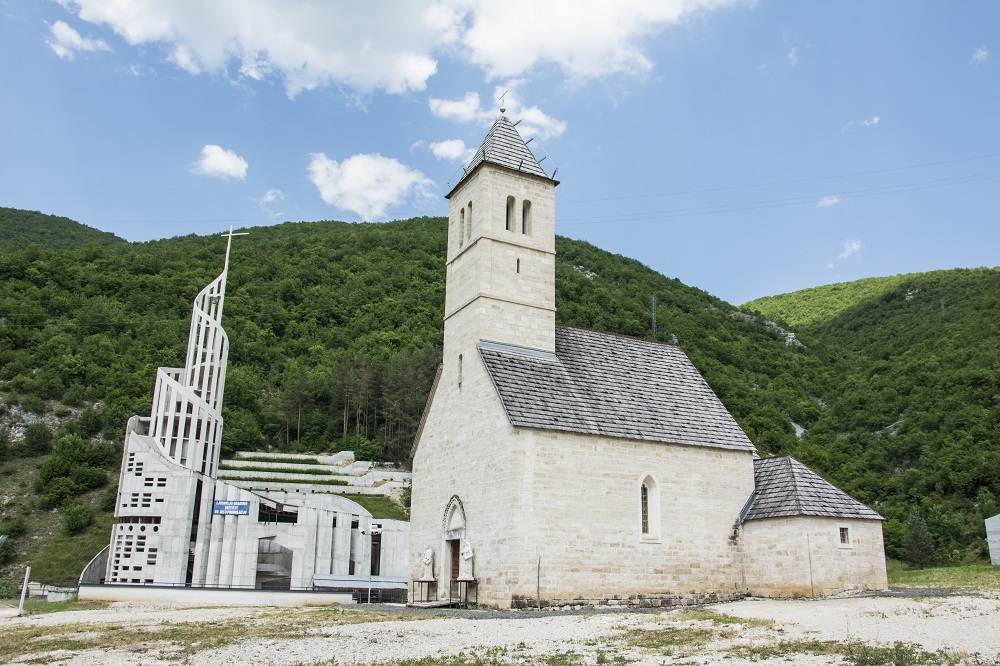 The St. John Church – one of the holiest shrines in B&H

The St. John Church is not an ordinary house of worship used by the local residents. For Catholics, is it one of the holiest shrines in Bosnia and Herzegovina and the region.

When you travel from the royal city of Jajce towards Banja Luka, some ten kilometres down the road, in the village of Podmilačje, you will see to your right a rock, solid and imposing enough to guard the tower which used to stand on top of it, which as some historians suspect, was used as an outpost by the soldiers of Hrvoje Vukčić, who guarded the city from that side.

Right by the footing of the rock, a small church was built in mid-15th century, dedicated to St. John the Baptist. The church remained intact even during the Ottoman era. It is interesting that this church is the only medieval church which continuously served its purpose, since the day it was built.

It has been reconstructed and expanded several times over the past several centuries, and the whole compound, including the church and the adjoining buildings was burnt to the ground in the most recent war. The church alone has been restored in the year 2000.

It needs to be added that the Church of St. John was not just any place of worship, used for religious services by the local residents. For Catholics, it is, first and foremost, one of the holiest places in Bosnia and Herzegovina and the region.

Every year, on the eve the Feast of St. John the Baptist, which is observed on 24th June, thousands of devoted believers from all over the world gather here. It is believed that the prayers offered at this place bring happiness and good health. It has even been noted that several patients, given up by the modern medicine as hopeless, were miraculously cured.

Observation of the Feast of St. John has a very long tradition in this region. The cult of this great Catholic saint is related to John of Wildeshausen (Germany), who was assigned by the Pope to go to Bosnia and eradicate heresy. Since there were no heretics in Bosnia, John recognised the intent of the Hungarians and the Pope to provoke a crusade to Bosnia under the excuse of fighting heresy, which would put Bosnia under foreign domination, so as a sign of protest, John returned to Germany.

The Pope persuaded him to return to Bosnia and he agreed to do so, under his own terms.  He chose Jajce as his residence and relocated there in mid-13th century. He was held in very high esteem by the local residents, for his honesty and sincerity. He was very close with the local people and often helped them in addressing their everyday problems. He also taught them to use herbs and herbal potions to treat different ailments. He helped the poor, fed the starving and treated leprosy. The people regarded him as the saint even during his lifetime.

By the way, Hrvoje Vukčić commissioned construction of the church to honour St. John the Baptist and demonstrate his loyalty to the church. Since there was no road to Podmilačje, one must have walked to the church on foot.

Sadly, Hrvoje Vukčić did not live long enough to see his endowment complete. He died in 1416 and the church was consecrated a year later. At first, just like many other church buildings at the time, the church did not have a bell tower. Friar Antun Knežević claims that the bell tower was constructed by Podmilačje Pastor, Friar Augustin Purgić in the 19th century.