Amra Makan, marketing and PR manager of company Hyundai Auto B&H, was interested in the world of automobiles even as a little girl. She followed Formula 1 races and other motor races without having a clue that one day she would be working for the fastest-growing automobile brand in the world.

As a student at the Faculty of Economics in Sarajevo with a major in marketing, I grew to love marketing and had a desire to see myself in a dynamic branch, which I found myself in thanks to my mentors. After I completed my thesis, I had the option of choosing the world of banking or the world of the automotive industry, and it is clear what I chose. I chose this world, expecting it to be dynamic, constantly changing, new and creative, because it fits in with my temperament and character. The fact that I’ve been in this world since 2007 speaks of how successful I’ve been.

It’s been almost a decade since I joined the Hyundai family. For a number of years, Hyundai has been the fastest-growing brand in the world,  and the mere fact that it is a brand that has such expansion, makes it possible for an individual to develop it further, and maximize its potential. Of course, what is most important is that the brand develops along with quality. My vision was to utilize all the potential of the brand and the opportunities for its further development in Bosnia and Herzegovina, but at the same time to develop myself, my knowledge, to learn and obtain new skills each day, as that is something that marketing requires.

In order for a woman to be successful in the world of automobiles, she needs to be diligent, hard-working, precise, with a clear vision of the brand, product and branch, but in the end, the most important thing is that she must love what she does.

The greatest success has been the continuous growth and development of the Hyundai brand in B&H over the last eight years. Considering that marketing is one of the main generators of growth in every company, that’s what I’m most proud of. It’s hard to single out a particular project, as I’ve had a number of implemented events, promotions, press conferences, campaigns, collaborations, be they local, regional, world-based.

However, I’ll single out some projects that have been special for me, like Hyundai Fan Park Sarajevo from 2014, due to which Sarajevo found itself neck to neck with four world metropolises like Sydney, Turin, Berlin and Madrid. There are also collaborative projects with other companies, and one of them is Red Bull Cliff Diving in Mostar, which won an award in 2018 from the regional Hyundai HQ for marketing; this is something I manage, which I’m very proud of.

Why Hyundai? Reliability, quality, safety, attractive design, perfect ratio of gain and investment are just some of my arguments. It’s impossible to recommend and single out one model, because they all have their target market and buyers who have different needs and preferences. Hyundai Elantra was declared the Best Buy Auto in B&H by Klix Auto in 2020. That’s one of the best-selling Hyundai vehicles in the world, I think that fact speaks enough for it. On the other hand, if I was to single out one Hyundai model that is the most sought out and best-selling in B&H, that is the Hyundai Tucson. Hyundai Tucson is the ultimate winner in recent years when it comes to SUV vehicles in B&H; it breaks all the stereotypes, as since day one of promoting it on the B&H market in 2015, up until today, demand for it has grown continuously.

Thanks to the regional test drive for i30 in B&H, where for the first time media from nine countries of the region and beyond took part, I got the opportunity to show a part of the natural beauty, customs, tradition and all the diversity of our coutry. The Hyundai media caravan took off from Sarajevo via Konjic, Jablanica, Mostar to Međugorje, with sightseeing at every location, but with an emphasis on visiting the Old Bridge and the Mostar čaršija, the beautiful ethno village in Međugorje, the Kravice Waterfall… With all that, invitees of course had the opportunity to taste some local specialties, visit wineries, see some traditional games of Herzegovina, and how tobacco used to be cut and prepared in the traditional way. All in all, the aim was to present our country well and show the best of what we have.

I aim to combine business with pleasure as much as possible, and at every destination, I go to the old center of the city, try a traditional dish or see some sites and markings of the place I am in. It’s very hard to single out a destination, as they all have something special, but if I was to look at it completely, I’ve been most impressed by the cities of Porto, Tbilisi and Shanghai. Privately, I really try to travel as much as possible, as at a certain point, you just realize that getting to know other cultures, cities, customs has become a hobby, so when it happens that you don’t go anywhere for a while, at least 50 km away, you feel restless and you feel the need to move. Thanks to the fact that my family is in Jablanica, I live at two destinations, so perhaps that fact confirms what I just said.

I think I’ve chosen the perfect field that suits me, so I’d probably still be in marketing or I would have stayed in sport until the end.

In her beloved Jablanica, Amra fell in love with handball. For fifteen years, she would leave her heart on the field and she wanted to take it further, but life took her in a different direction. However, she has never forgotten her first love. 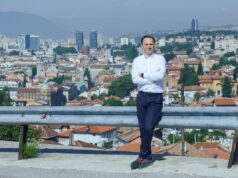 Almir Peštek: BiH Is a Country of Untold Stories