Morocco borders the Atlantic Ocean to the west, whereas the west Mediterranean Sea washes its shores to the far north. Between these two points, near the former town of powerful mafia and smugglers, and nowadays the port town of Tangier, Morocco comes closest to Europe—the Strait of Gibraltar separates Morocco from the southernmost tip of Spain by just 7 kilometers.

Morocco is one of the Maghreb countries. Its name comes from the Arab word al-Maghribiyah, which means the West and refers to all the Arab countries of Northern Africa west of Egypt: Morocco, the Saharan Arab Democratic Republic, Algeria, Tunisia and Libya.

In the central part of the country, the monotony of desert landscapes typical of Africa is broken by the Atlas Mountain Range and its highest peak Jebel Toupkal (4167 m), where the snow rarely melts. The red and grey colors of the Atlas Mountains, the bare hills and cliffs, village oases and mud huts surrounded by palm trees, make up a wonderful place which made it to the big screen. Here and there, between the cliffs and near the villages, blue waters of mountain brooks and rivers are finding their way down the mountains. River Draa (Darha or Dara), Morocco’s longest river, which flows through the Draa Valley, fairy-like little towns called Ouarzazate  and Zagora, and a delightful oasis in the Ziz Valley, are some of the favorite tourist destinations in the Atlas Mountains.

One of the most romantic Berber fortifications – Aït Benhaddou – is located on the plateaued basin of the Western Atlas Mountains. The so called kasbah or ksar, a town of red mud plaster buildings built along desert caravans paths, stands on a small hill on the left bank of the Ounila River oasis, where some of the Hollywood blockbusters were filmed (Prince of Persia, Gladiator, The Mummy, The Last Temptation of Christ, etc).

Kasbah and medina, typical names of old cities and fortresses in Northern Africa, are generally bounded by walls. They are packed full of flat roof houses, mosques decorated in colorful tiles with geometrical and floral motifs in the labyrinth of narrow winding streets, and gardens with orange trees. Spanish Moors brought these architectural elements to Morocco in the 15th century when they were forced to abandon their homeland Andalusia – Al-Andalus. 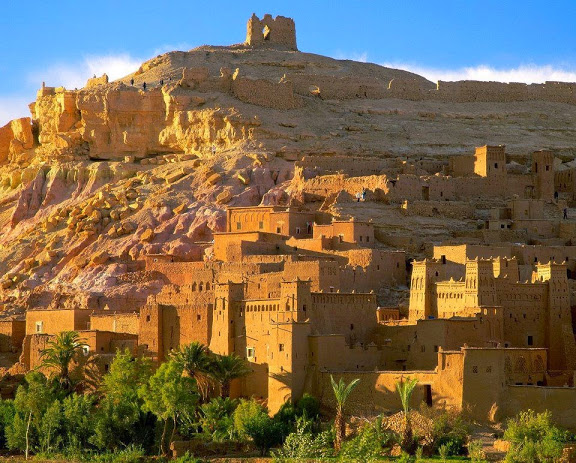 West of the Atlas Range, in Central Morocco, Fez, Marrakech and Meknes, the most prominent trade, cultural and historic cities of Morocco, and today’s most important intermediate tourist stops, are located. You can spend hours wandering the street medinas of any of these cities exploring ancient bazaars and Arab souks, shopping for typical souvenirs, or watching master craftsmen at work.

Marrakech is the largest and best-known tourist center in Morocco. It is worth visiting the great Djemaa El-Fna square full of all sorts of stands and performers attracting tourists especially at dusk, leather tanneries, the Koutoubia mosque, famous souks with various types of merchandise, and the El Bahia Palace. Finally, catch your breath and relax at Majorelle Garden, an oasis with topical plants and cacti. 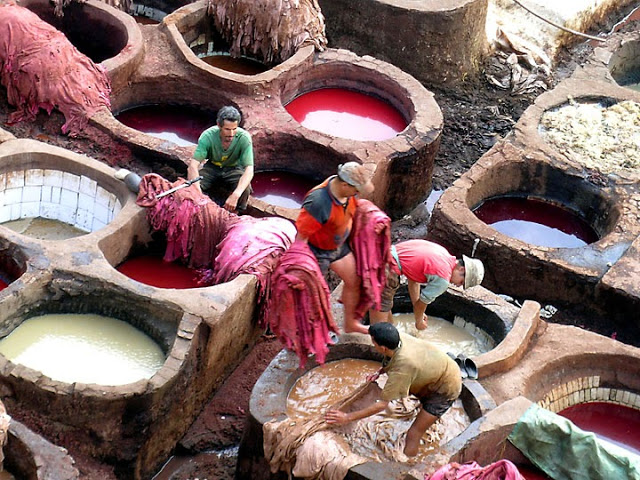 In Fez, within the medina, there is a place where leather is tanned in “tanning pools” made of stone. Famous photographs with colorful circular opening and the local people who have been tanning leather the same way since the Middle Ages, cannot begin to illustrate the distinct odor of leather tanning in the Leather District; this is the only place where you can experience it first-hand. In Fez, you should also see the fourteenth-century Bou Inania madrassa, Berber Pharmacy and a shrine – the Merenid Tombs.

When visiting Morocco, many tourists unfortunately fail to visit Meknes, which was once the capital city of Morocco, and its wonderful medina. Take a tour around Bab Mansour, one of the medina’s 27 old gates, the Hedim Square, Heri es-Souani and the Bou Inania madrassa.

Apart from Agadir in the south, which is the best-known seaside destination in Morocco, famous for its hotel resorts and sandy beaches, Casablanca and the capital – Rabat are the largest and most modern cities of the Moroccan Atlantic coast. Casablanca is a big city, and the legendary Casablanca movie, the story of a great romance between Lauren Bacall and Humphrey Bogart filmed in the 1950s, was named after it. Casablanca is also known for a grand medina and the world’s third largest modern-design mosque – King Hassan II Mosque. On the other hand, in the less visited capital city of Rabat you should explore the ruins of the old town founded by the Carthaginians, the Hassan Tower and the Royal Mausoleum. In Rabat, you can also see the Royal Palace, but only from the outside.

You can end the tour of Morocco by visiting the Tangier Port. As you look at the Spanish mainland across the Gibraltar Strip, think about the reason why Henry Matisse, the famous French painter, Jimmy Hendrix, the American Musician, a few members of the Rolling Stones, Winston Churchill, the British politician, or Mark Twain, the writer, frequented it or even lived in this port city for a while. 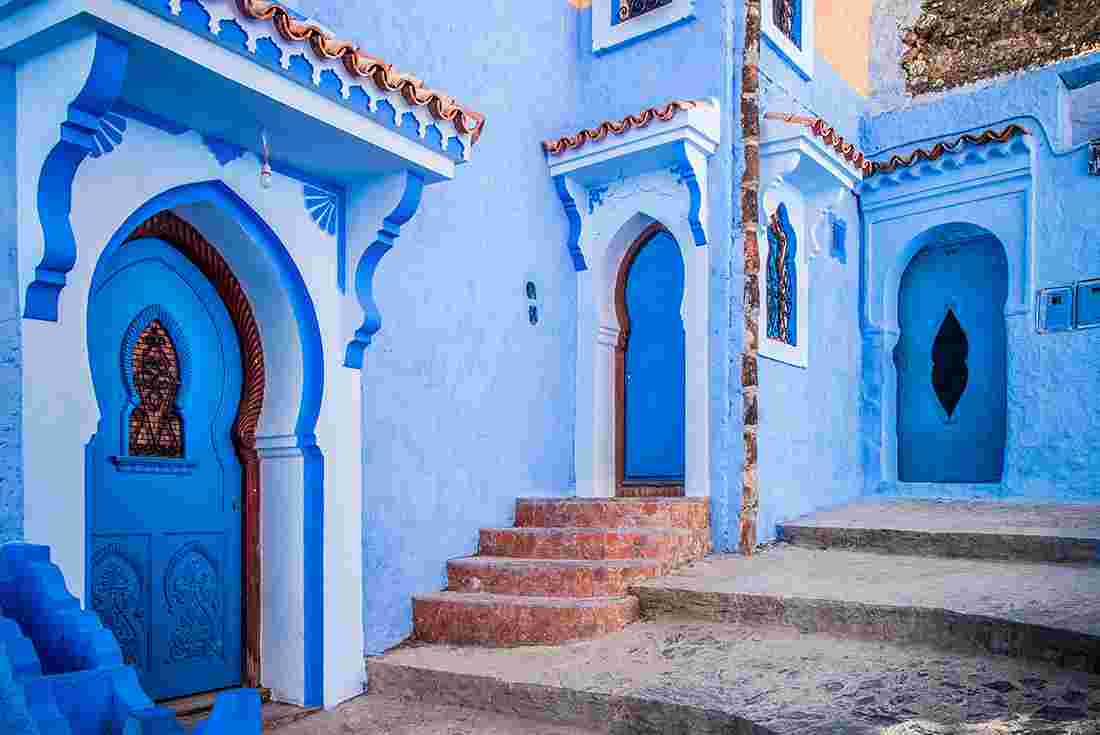 Many agree that the best way to end the tour around the country is to spend the sunset at Chefchaouen (or Chaouen). A charming little town on the brink of the Atlas Mountains is known for its white houses and details in light blue colors. As the sun goes down, take a stroll down streets of the old medina or stop by at some café or the Ras el-Maa Waterfall for a little refreshment.